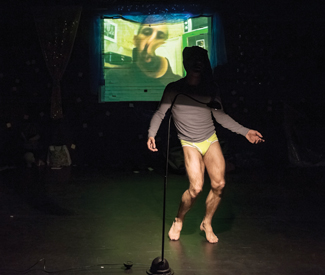 DANCE What a fine mess Anthony Rizzi’s An Attempt to Fail at Groundbreaking Theater with Pina Arcade Smith was. Presented by Kunst-Stoff Arts, which shows some of the edgiest performances in town, Attempt succeeded brilliantly, just about drowning the audience in an onslaught of visual and sonic images, truisms, history, conundrums, harangues, punch lines, some gorgeous dancing, and a passionate sense of life as theater. It was a wild ride and worth every one of the 80 minutes it took for Rizzi’s ecstatic twirling to be swallowed up by the dark.

In 1985, the ballet-trained Rizzi joined William Forsythe’s Frankfurt Ballet — which was quite unknown at the time — because no American ballet company would hire him. It probably was the smartest move he could have made, enriching him in ways he could not have imagined.

Rizzi has become a multi-talented artist who, on this occasion, impressed with the sheer skill with which he shaped this unwieldy material. As a performer he easily slipped into the roles of frustrated creator, impatient observer of social trends, hopeful believer, and stand-up comic, and all of them felt true. He looked like a juggler with everything up in the air, and yet he remained in complete control. He reminded me of the “fools” that kings once kept, perhaps apocryphally, because they needed somebody to tell them the truth. Rizzi, as a modern man, is not that ambitious; he is happy “to go for a kind of truth.”

Perhaps most remarkable about Attempt was Rizzi’s cut-to-the-bone honesty, which he uses in “a time of stupidity” to slash through the garbage that fills his life as an artist, as a man, and as queer performer. (His definition of queer as “non-conforming” is one of most succinct that I have yet to come across.) Much of the material was autobiographical, from his encounter with nuns in Rome to one with an orthodox rabbi in Antwerp. Both of them involved love. Some of these anecdotes were hilarious; others made you cringe. His observations on art and dance making in contemporary culture were fiercely sardonic. He took the scalpel of his wit to living via Facebook, post-modernism, dramaturgy, arts education, and dance training, among others. He could affect the stance of a whiner as easily as that of an impassioned teacher when he talked about love as a political act.

Despite all its frantic energy, behind Attempt lies a deep sadness about the world as it is. When (in a reference to an early Pina Bausch work) Rizzi fails to climb a mountain — in the form of bunch of ladders — he puts it on his back in the shape of a huge black bag he physically wrestles with.

The people whom Rizzi admires most are not driven by a desire for success, but by their willingness to risk failure while trying to be “as good at what they do as they can.” These include Bausch, founder, or as he says “re-creator,” of European Tanztheater; New York performance artist Penny Arcade, and filmmaker Jack Smith (1962’s Flaming Creatures). Arcade and Smith were pioneers of the avant-garde in the 1960s; Arcade is still working, Smith died of AIDS in 1989.

If in the first half of the show Rizzi channeled Smith as kind of narrator, in the second half he literally crawled into Bausch and Arcade’s skin. One half of him sported a tight sequined skirt with padded buns and boobs; the other was flat as a board with stringy long hair. These encounters became Attempt’s most theatrical element, with much of the conversation taken literally from the artists’ own words. Their back and forth had a slapstick comedy to it that ran thin rather quickly.

Rizzi was not alone on stage. Former Frankfurt Ballet colleague Irene Klein acted as stage manager. She also became Bausch when he first tried to drag her up the mountain from which “a cry was heard.”

“You should eat more. It fucks up your brain,” Rizzi tells the superbly trained but slender dancer. But it was Klein’s focused and quietly modulated solos that brought an ethereal quality to Attempt. They spoke more eloquently than torrents of words. In one of his many quotes Rizzi said to “dance as if nobody was watching.” Klein did.