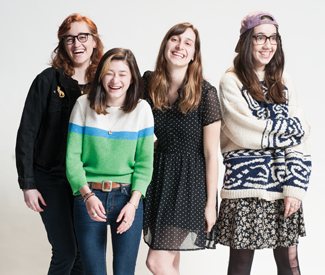 MUSIC Ask 10 artists the same question, get back a dozen answers. The replies to my very brief questionnaires this year — it’s our second annual On the Rise issue — were revealing, like peeling back the skin of a tender orange, or rather fragrant onion.

Some juicy responses filled me with pride for our fair city and sisters across the bay, some inspired me to dig deeper, some just stunk. Jokes — they were all much appreciated, thank you. As the surveys came floating back in, I got excited by personal sonic descriptions such as “club bangers and sultry club grind jams,” “morbid classics,” and “Brazilian shoegaze.”

Another question that garnered a flurry of diverse answers from the acts: what’s the best part of life as a Bay Area artist? Turns out, the artists like that the crowds here mosh and smile, that making music locally isn’t intimidating like it can be in LA or NY, that new groups pop up whenever you think you’re clued in to it all, that they’re able to see live music every night of the week, the monthly showcases like Sick Sad World, the tight knit community of elder area rappers, and “the widespread non-commercial ethos of groove.”

And like last year’s list, this On the Rise bunch is rather varied, dealing in electronic arts, post-metal, hip-hop hype, ’70s glam, radio-friendly soul pop, and beyond — truly creating unique sounds across the board. One common thread I did find was the location; more than half of those picked for the 2013 list happen to be based in the East Bay, meaning at least six of the 10 are usually spotted across the bridges and BART stations. What that says about our local music scene, I haven’t quite dissected, though I often hear rumblings from artists in the area about rising SF rents and lack of rehearsal space. These are concerns to discuss amongst ourselves.

For On the Rise 2013, this much I know: these are the acts that I’d like to see get more attention this year and beyond. These are the bands, singers, musicians, and rappers that have been creating exciting output for less than a year, or some, for nearly a decade. They’re the ones to keep your eye on, to stay involved with, to hand over your hard-earned cash to see live. They’re keeping the Bay interesting — and weird — and for that, I’m grateful. Here are their stories.