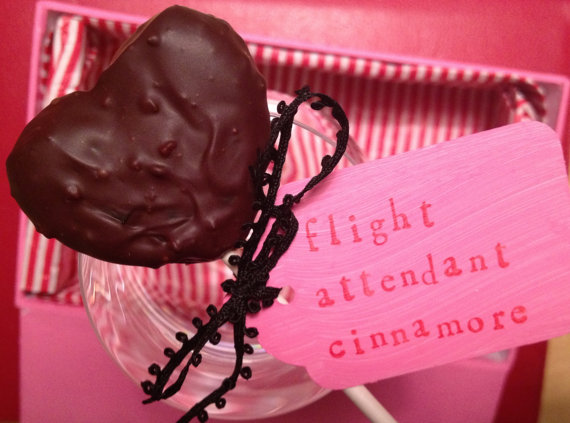 Hey Valentines. Did you need a libido boost to buoy you through this week of boner-killing commercialized love-things? Meet Pandora’s Pops, then, a little venture headed up by Jena Chambers, a body worker who once ran a massage school and clinic in Asheville, North Carolina for six years. Chambers recently launched a Kickstarter to fund large-scale production of her pops, which are vegan, organic, herbal — all the things.

They also purport to give you feelings. Our focus was on Pandora’s aphrodisiac pops, since V-Day approaches and Chambers’ brand ambassador Mary Lollipoppins will be flitting about town distributing them. The line also includes mental stimulant pops, pops to help you quit smoking, pops to calm you down, and more.

How well do they work? The pops were thrust into the hands of Guardian staffers last weekend. Results are as follows:

I’m going to give this one a solid “didn’t hurt.” Despite my bachelor’s degree in sociology I created a totally flawed sex pop experimental design: I ate my “Hot Professor” pop an hour before meeting a date for which no additional stimulant was needed. Did I giggle at his French dialetic thought jokes because of my pop’s unique herbal blend? Was Pandora responsible for the way I tolerated my companion’s meandering anecdotes or the effusiveness with which I cooed over his station wagon? Maybe? At any rate, unlike the other reviewers I thought my professor pop tasted dreamy (not too sweet, spicy, imparting the distinct sensation that I was eating something not free of nutritional value.) I’d do it again. Um, eat a Pandora Pop I mean.

Maybe I’m biased because I met Chambers when she brought the pops by the office and she is adorable:

I had the “Nurse Ginger” pop, which tasted OK but mildly reminiscent of potpourri. It felt a bit tingly on the tongue, but didn’t seem to have any effect on my libido.

When I heard that Pandora’s Pops would “amplify [my] natural, magnetic pheromones,” I thought: goodie. I can smell even stronger. How sexy will that be? Will my partner even notice over the odor of the dog and the unwashed laundry and the teenagers who don’t seem to understand the meaning of “regular showers?” What the hell; can’t hurt.

The website described my “Flight Attendant” lollipop as “cinammon and exotic/familiar spice.” Actually, tasted like stinky socks. And I can give you all a basic dating tip: Nobody wants to kiss you when your mouth tastes like stinky socks. Trust me — I tried.

To put it simply: whiskey trumps aphrodisiac lollipops. I took one lick of my “Juicy Rose” pop and and half expected to turn into a lovesick puppy –- heart-shaped pupils and all. Sadly it seems any potential fireworks were masked by the stronger effects of multiple whiskey sours. But not all was lost -– my heart-shaped treat was defeated by alcohol but it still worked great both as a breath mint and a conversation piece.

So perhaps Pandora’s Pops were too delicately herbal to stoke the fires of hardened journalist-folks. Perhaps your sweetie is more easily-influenced? Or just really into sucking on hearts.