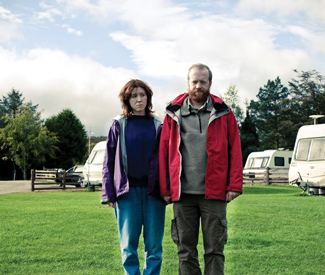 Berberian Sound Studio (Peter Strickland, UK, 2012) It’s the 1970s, and frumpy British sound designer Gilderoy (a flawless Toby Jones) has, somewhat inexplicably, been hired by a flamboyant Italian filmmaker to work on his latest lurid genre piece, The Equestrian Vortex — about a girl who realizes her riding academy is haunted by witches. Any resemblance to 1977’s Suspiria is entirely intentional, as writer-director Peter Strickland crafts a meta-horror film that’s both tribute to Argento and co. and a freaky number all its own, as Gilderoy begins to realize that the “vortex” he’s dealing with isn’t merely confined to the screen. Fans of vintage Euro horror will appreciate the behind-the-scenes peek at the era’s filmmaking process, as well as Strickland’s obvious affection for one of cinema’s most oddly addictive genres. Bonus points for the Goblin reference. Fri/8, 9:30pm; Feb. 13, 7:15pm, Roxie.

Bound By Flesh (Leslie Zemeckis, US, 2012) Following up her 2010 burlesque doc Behind the Burly Q, Leslie Zemeckis (wife of Robert, director of 2012’s Flight) tackles another subject sprinkled with the tarnished glitter of a bygone era: conjoined twins Violet and Daisy Hilton, vaudeville and film (1932’s Freaks) stars who were exploited from birth by a series of shady guardians. When they finally earned their freedom in a landmark emancipation trial, their triumph was short-lived; not only were they ill-equipped to negotiate the perils of show biz on their own, they also suffered from grown-up-child-star syndrome, having tasted a level of fame early in life that they’d never reach again, though not for lack of trying. And, of course, they were conjoined twins — so amplify every possible life obstacle by about a million. Though Bound By Flesh suffers a bit from its limited source materials — be prepared to see the same photos of the Hiltons used over and over throughout the film — it nonetheless tells a tragic, fascinating, and utterly unique tale. Feb. 16, 5pm; Feb/ 17, 2:45pm, Roxie.

Iceberg Slim: Portrait of a Pimp (Jorge Hinojosa, US, 2012) Ice-T presents this study of a man (real name: Robert Beck) whose early years dabbling in “the second oldest profession” led him first to prison, and then — rather improbably — to the top of best-seller lists, as books like Pimp: The Story of My Life and Trick Baby (which became a 1972 blaxsploitation film) achieved cult status. Though the film’s first 30 minutes lay on the hero worship a bit thick (yeah, pimps are cool cats as far as movies and hip-hop’s concerned, but the real Beck is described as someone who “got a thrill out of degrading women”), the author’s talkative first wife and three daughters soon appear to offer some perspective. Archival interviews with Beck, and a detailed examination of his publisher, Holloway House (which employed only whites but specialized in African American literature), only add to this vivid biography. Sat/9, 5pm; Mon/11, 7:15pm, Roxie.

The Life and Times of Paul the Psychic Octopus (Alexandre Philippe, US, 2012) Eight correct predictions, eight tentacled arms, millions of enraptured cephalopod admirers: who could forget Paul, whose apparent ESP earned him nearly as much vuvuzela-blaring fanfare as the 2010 World Cup itself? This “fairytale” from the director of 2010’s The People vs. George Lucas begins with Paul’s death — he was young for an oracle, but old for an octopus, explains an employee at Sea Life Oberhausen, Paul’s German home. The doc then doubles back to examine how a publicity stunt involving acrylic boxes with taped-on flags and food tucked inside, plus one hungry octopus, could incite a global frenzy: epic lines at the aquarium, scrambling bookmakers, a full-scale media blitz, death threats, a rich Russian offering to buy Paul for a cool million Euros, an “Ask the Octopus” app, YouTube tributes, and more. At 90 minutes the doc stretches a little thin (fellow psychic animal Punxsutawney Phil even puts in an appearance), but this is fun stuff nonetheless. Sat/9, 2:45pm; Sun/10, 5pm, Roxie.

Sightseers (Ben Wheatley, UK, 2012) Ooh, yes, it’s the US premiere of the latest from rising star Ben Wheatley, who exceeds even 2011’s very fine hitman-goes-bananas Kill List with the sick and hilarious Sightseers. Awkward, nerdy couple Tina and Chris (Alice Lowe and Steve Oram, comedians who wrote the script with Amy Jump) pile into an RV and burn rubber toward some of Britain’s lesser-known attractions: Crich Tramway Village, the Cumberland Pencil Museum, etc. But it’s clear from the start that all’s not well in this relationship, and it doesn’t take long before their “erotic odyssey” also includes screaming fights, dognapping, and multiple homicides. So wrong, and yet so right — the evocative Sightseers manages to invent, and perfect, its own genre: the serial-killer road-tip rom-com. Sat/9 and Mon/11, 9:30pm, Roxie. (Cheryl Eddy) *