Home Kier-La Janisse on "House of Psychotic Women" and IndieFest 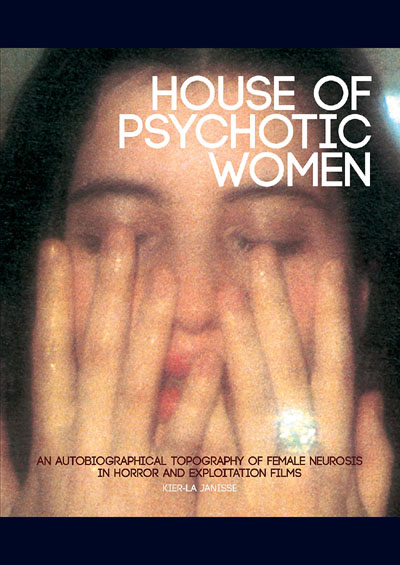 I first heard of Kier-La Janisse when a film she’d compiled, Metal Storm: The Scandinavian Black Metal Wars, screened at the Yerba Buena Center for the Arts in 2005.

That would be a rad enough reason to want to read her new book, House of Psychotic Women: An Autobiographical Topography of Female Neurosis in Horror and Exploitation Films (FAB Press, 360pp., $29.95), but the Canadian dynamo’s resume doesn’t stop (or start) there: she’s also the creator of Vancouver’s late, great CineMuerte Horror Film Festival; co-founder of Montreal’s Miskatonic Institute of Horror Studies and the Blue Sunshine Psychotronic Film Centre; has programmed at the Alamo Drafthouse Cinema in Austin, Tex.; was the subject of the 2004 doc Celluloid Horror; and has written or contributed to too many film magazines and books to list here. (One of them is Fangoria, though.)

Her talent as a writer is backed up by House of Psychotic Women, a unique tome that melds Janisse’s autobiography — troubled childhood, turbulent relationship with her parents, teenage rebellion, a brief marriage — with her film fascination, tying films that focus on “female neurotics” (and there are a lot) into the events of her own life; there’s also a section of lurid posters and ads for these films, and an appendix highlighting notable films in the genre, mainstream (2010’s Black Swan), classic (1940’s Rebecca), and cult (1982’s The Entity) all-inclusive.

Janisse heads to San Francisco Fri/8 to host a pair of screenings as part of the San Francisco Independent Film Festival: Linda Blair-goes-to-reform-school TV movie Born Innocent (1974), and demented exploitation entry Toys Are Not for Children (1972). I spoke with her over the phone from Los Angeles, where she’s screening House of Psychotic Women-appropriate films like 3 Women (1977) and Secret Ceremony (1968) at Cinefamily before and after her IndieFest visit.

San Francisco Bay Guardian: In House of Psychotic Women, you admit that the book took 10 years to write. When you started out, did you have any idea that it would take shape as an autobiographical film guide?

Kier-La Janisse: The idea for the book came from the fact that I used to have this fanzine, and I would write a lot of reviews and essays about films like this. Originally, I thought the book would be a compendium of essays, some of which I’d already written, and some new ones that I would write just for the book.
But as I started writing, my interest in academic writing started waning. I had been in school for a few years, and I loved dense, academic writing. Within a few years, I started to look at a lot of it as being really pretentious and unnecessary, so I veered toward more colloquial writing again. And that whole ten years of working on it wasn’t constant. Several years of that was not working on it at all.

[The format] changed many times. At first, I was just going to have the personal stuff be these little anecdotes that would be sidebars, but not integrated with the text at all. And then at some point I had even approached my dad about writing it with me [laughs]. Luckily, that went nowhere. And then, with the internet becoming such a wealth of great film writing — I mean, there’s lots of shit on the internet too, but there’s lots of really good film-journal stuff on the internet. But I was just like, “Now all these films are way more accessible, there’s way more people writing about them. What do I have to say that’s going to be different?”

So that was when, I was having a bit of crisis of confidence about it, and some friends were saying, “You relate to these movies so personally. Why don’t you just write about it from that perspective?” I thought that sounded really self-indulgent. Like, nobody’s gonna care about my personal story. But then I realized that I really like reading trashy autobiographies and stuff, so I thought, “Maybe people really will get into it, from that angle.” And once I decided to do it that way, the rest of writing it was really quick.

SFBG: You’re obviously someone who has seen a lot of films, and there are clearly a lot of films about “psychotic women.” How did you decide which films to discuss in the book?

KLJ: It was never supposed to be comprehensive. Originally, I was going to write the narrative part with the movies intertwined with my life stories, and then I was gonna have the appendix be 100 essential crazy-woman movies. But then, I couldn’t pick. I kept thinking, “Well if I include this, I have to include that…” The appendix itself has very little methodology to it at all.

As I was writing I found it really hard to let go of certain film and cut them out in order to stick with the 100 movies. So I just ended up sticking everything in there that I could think of at the time. I gave myself up to a certain point — in January of 2012, I was like, “That’s it! I’m not considering anything any more, even if I’ve forgotten something.” I couldn’t keep writing. I had to stop.

So the movies that are in the narrative part are movies that, when I was watching them, they reminded me a lot of these personal stories or of characters from my own life, or helped me explain the behavior of people from my own life. And then, the appendix is just kind of a mish-mash. A lot are not movies directly related to incident from my life. They’re just movies that I thought, if people are interested in the subject matter, then they should check them out.

SFBG: Has your family read the book? What do they think of it?

KLJ: My dad, “Oates” [a nickname given to him by Janisse, due to his resemblance to actor Warren Oates], has read it. Once the publisher had agreed to publish it, I sent it to my dad, before it got printed, so that he could know what was coming. He didn’t talk to me for a couple of months, but after that he was just like, “I don’t really want to talk about it. I’m proud of you that you wrote something, and I think it’s well-written, but I don’t want to talk about it.” He shares it with people, though. He sends out Facebook messages about it: “Oh, my daughter was in the paper!” And I’m like, “Dad, it kind of defeats the purpose of me giving everyone a fake name in the book if you’re gonna tell everyone it’s you.”

My grandmother, I think, started reading it. She was very upset that there was a picture of my mother in the book. But the family’s been surprisingly supportive. Some of them, even when they were kind of mad about it, after they’d said their piece to me, it was fine after that.

SFBG: When I first started reading it, I assumed the book would focus on the exploitation heyday of the 1960s and 70s, maybe some 80s. But it also includes contemporary films, like Black Swan and 2008’s Martyrs. How do you think the role of the “psychotic woman” has changed in films over time, or has it?

KLJ: I think it’s changed a little bit. But if you look at a movie like Antichrist (2009) or The Piano Teacher (2001) — some people are like, “Why are they in there? Those are, like, art movies!” [laughs]. I honestly don’t see the difference. The feeling I get watching those movies is the same as I get from watching, like, Let’s Scare Jessica to Death (1971). To me, they’re the same.

I have all sorts of movies [like Jessica in the book]. But if you look at movies like Antichrist and Possession (1981), they’re very dense in terms of the psychology of their characters, and how far into the dark abyss they go. A lot of the movies in the 1970s, they didn’t even think they were addressing female neurosis as much as they were, whereas Antichrist and Possession know flat-out that they are characterizing their women as neurotic, and they want to talk about it.

A lot of the earlier films, I suspect, it’s not that well thought-out. It’s just that those were types that existed and they used them in the movies. If you look at All the Colors of the Dark (1972), where the Edwige Fenech character is being medicated by her husband and she’s losing her mind, I don’t think people at the time would have given the movie as much thought, in terms of how she was written, as they would when Possession came out, the way they would look at Isabelle Adjani.
Those roles have always been there, but the roles themselves were more dismissive back then. When that was the topic of the movie in the early 1970s, it was very tied in with, “Well, it’s just part of the times.” Inevitably that bleeds into the movie. Whereas with a movie like Possession and Antichrist, it’s not just a part of the times. It’s the subject that the director wants to talk about and it’s very clear.

I do think there’s kind of a weird thing happening in movies right now, where it seems misogyny is making a comeback. I feel like people are like, “Well, we know about feminism now, so it’s OK. Well, we’re all feminists now, so it’s OK to kill a bunch of women in a movie, because we know better.” All of these things, I think, are ongoing discussions. I think now, the discussion around that kind of imagery is being revived. It’s like, just keeping vigilant over things.

A lot of people find [Antichrist director] Lars Von Trier’s characterizations of women to be really misogynistic. But I love his movies and I love his female characters.

SFBG: You’ve been hosting screenings in conjunction with House of Psychotic Women in various places, including Los Angeles. I noticed the films you’ve selected differ, for the most part, from place to place. What made you choose Born Innocent and Toys Are Not for Children to screen at IndieFest?

KLJ: Born Innocent I picked specifically because I knew that the Cosmic Hex archives in San Francisco had an uncut print of it. It was a way to tie into a local organization that already exists and do something fun with them and their archives.

And then Toys Are Not for Children, that’s a movie that I’ve been trying to push at all the other venues I’ve done events at. I’m always like, “Play Toys Are Not for Children, that movie’s totally disturbing!” And everybody’s like, “Aw, I never heard of that. I don’t want to play it.” But Jeff [Ross] at IndieFest was the one guy who was like, “OK. Sure!” I’ve seen it in a theater a couple of times in Austin, and the crowd just gets so squirmy. It’s just such an uncomfortable, inappropriate viewing experience. It’s a super-sleazy exploitation film, but I love it.