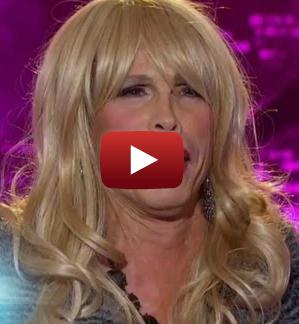 This shit’s getting so strange that you start to wonder if singing alone is enough to keep the Idol franchise going. In Oklahoma City, (thankfully) the last stop before the real action begins in Hollywood, Nicki Minaj is wearing weird leggings, Mariah Carey has some sort of diamond suit on, and Steven Tyler has a dress and a wig.

Yeah, Steven’s back — not as a judge, but as a contestant, in a carefully staged hoax, in drag, wearing red lipstick and an outfit that your grandmother might have worn, and identifying himself as “Pepper.” He refused to sing. Nobody bought it. He flashed his ass at the judges as he left. Highlight of the auditions so far.

Here’s Viv’s recap: A young woman named Haley came with a dog puppet named Oscar. Oscar howled and yodeled. Haley sang in a kind of duet. The dog was a bit freaky; the judges liked her and sent her on to The Show. A crazy girl named Zoanette sang the national anthem and hit the notes so high that Keith fell off his chair. A 16-year-old named Kayden has cystic fibrosis and has to be on an oxygen machine but still managed to sing well enough to make it to Hollywood.

At some point, as the great Simon Cowell used to say, the people have to realize this is a singing contest. We shall see.