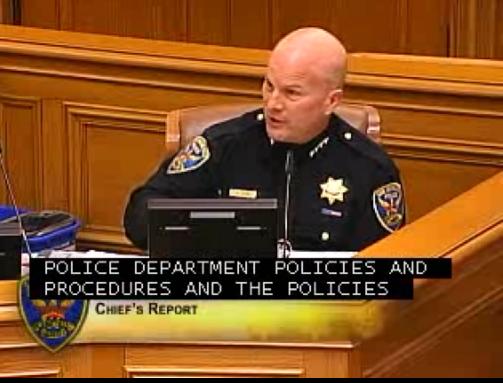 The Coalition for a Safe San Francisco – which includes civil libertarians and members of Muslim groups and other targets of racial and religious profiling by the FBI – last May stood with Police Chief Greg Suhr and sponsoring Sup. Jane Kim as Lee signed what they called this “historic civil rights legislation.”

But at the time, the activists told the Guardian that the value of the watered-down legislation depended entirely on how it was implemented, particularly in the annual reports on SFPD-FBI operations that it required. To ensure they were specific enough to be meaningful, the coalition says it communicated with Suhr several times asking him to include the number of joint investigations undertaken, how many times FBI requests were denied by the SFPD, and possible violations of department policy and how they were handled.

Instead, when Deputy Chief John Loftus gave the first of these annual reports to the Police Commission on Jan. 23, he spoke for only a couple minutes and said the SFPD was in “full compliance” with the ordinance and a Suhr general order banning surveillance of law-abiding citizens, offering no further details.

“We were very clear with the chief about what we expected to see,” Nadia Kayyali of the Bill of Rights Defense Committee, a coalition member, told the Guardian. She also said the report “was slipped on the agenda at the last minute,” despite assurances that the coalition would be notified and given a chance to respond. “It does show a lack of regard for the ordinance and the work that went into it.”

The activists say that Suhr broke his promise to them to include the more specific information that they sought, even after they recently followed up with messages reminding him about that assurance. “I was in the meeting where he said he would,” Nasrina Bargzie with the Asian Law Caucus, another coalition member, told us. Bargzie said she was disappointed and dismayed by what the report included, “but we’re going to keep pushing on it.”

The controversy surrounding possible SFPD-FBI spying on people who haven’t violated any laws – which is illegal under local and state law – broke almost two years ago when the American Civil Liberties Union obtained a secret 2007 SFPD-FBI memorandum of understanding placing SFPD officers under FBI command. It seemed to bypass local restrictions adopted after past SFPD scandals involving police spying on political groups.

Suhr tried to quell the controversy by issuing a general order banning officers from participating in surveillance that violates local rules or the state constitution’s privacy protections, but activists pushed for a stronger assurance. The Board of Supervisors then voted 6-5 to codify those protections into city law, but Suhr objected and Lee vetoed the measure. A weaker version calling for annual reports and Police Commission reviews of future SFPD-FBI MOUs was approved unanimously by the board.

Now, it appears the SFPD has done little to soften the “trust us” stance that it has taken from the beginning, frustrating activists who had pushed for more, here and in other cities that do domestic surveillance with the FBI.

“These policies are explicit and unequivocal. San Francisco Police Department members and their Joint Terrorism Task Force supervisors are aware of and familiar with these policies,” Loftus told the commission, explaining that the SFPD did its required quarterly reviews in November and two weeks ago, finding nothing to report.

Police Commissioner Suzy Loftus asked if he could “explain a bit more” and Suhr – who was at the stand giving his report as Deputy Chief Loftus (no relation) gave his from the lectern – answered: “All San Francisco police officers are held to the San Francisco Police Department policies and procedures and the policies and laws of San Francisco, whichever is more strict. So depending on wherever they are, their fallback, if you will, is whatever the policies, procedures, laws, ordinances, and all of San Francisco.”

Suhr’s answer seemed to satisfy the commission, which defended the SFPD’s secretive approach rather than asking any more questions.

“Our officers will not participate in any investigation unless there is a predicate offense that is a violation of the California Penal Code or the United States code, so they will not be involved in random surveillance or random assessments or talking to people,” Commission President Thomas Mazzucco said.

Commissioner Joe Marshall also said he trusts Suhr and we all should too: “I want the public to feel reassured that when the chief says that’s going to be the way it is, that’s the way it is.”

But the coalition, which includes 79 organizations, was less than satisfied with that answer. In a statement issued today, it wrote, “Deputy Chief Loftus’ report completely failed to provide the information required to ensure the accountability and transparency required under the Safe San Francisco Civil Rights Ordinance. The Coalition calls on the Chief of Police to promptly issue a public written report containing the information he promised he would provide.”

Neither Kim – who sponsored both the original legislation and weaker alternative – nor the SFPD have returned Guardian calls for comment yet, but I’ll update this post if and when they do. You can watch the hearing yourself here, with that item beginning at the 48:20 mark.