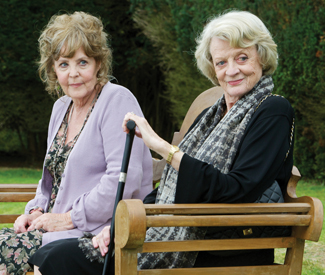 FILM Every year there’s at least one: the adorable-old-coot fest, usually British, that proves harmless and reassuring and lightly tear/laughter producing enough to convince a certain demographic that it’s safe to go to the movies again, just this once. The last months have seen two, both starring Maggie Smith (who’s also queen of that audience’s home viewing via Downton Abbey), and in this case more is probably less.

Last year’s The Best Exotic Marigold Hotel, in which Smith played a bitchy old spinster appalled to find herself in India (hip replacement operations being cheaper there), has already filled the slot. It was formulaic, cute, and sentimental, yes, but it also practiced more restraint than one expected, delivering a certain amount of emotional payoff you didn’t have to cringe over the next day. (Particularly if you forgot how one-dimensional the Indian characters were — and they certainly were forgettable.)

Now here’s Quartet, which is basically the same flower arrangement with quite a bit more dust on it. Smith plays a bitchy old spinster — complete with hip problems — appalled to find herself forced into spending her twilight years at a home for the elderly. It’s not just any such home, however, but Beecham House (actually Hedsor House, a much-filmed estate in Buckinghamshire), whose residents are retired professional musicians.

Gingerly peeking out from her room after a few days’ retreat from public gaze, Smith’s Jean Horton — a famed English soprano — spies a roomful of codgers rolling their hips to Afropop in a dance class. “This is not a retirement home — this is a madhouse!” she pronounces. Oh, the shitty lines that lazy writers have long depended on Smith to make sparkle. Well, even she’s not that much of a magician.

Quartet is full of such bunk, adapted with loving fidelity, no doubt, from his own 1999 play by Ronald Harwood, who as a scenarist has done some good adaptations of other people’s work (2002’s The Pianist, 2007’s The Diving Bell and the Butterfly). But as a generator of original material for about a half-century, he’s mostly proven that it is possible to prosper that long while being in entirely the wrong half-century. The highlight was The Dresser, a play (later filmed, in 1983) of that type which throws bouquets at theater itself while handing an enormous slice of ready-cooked ham to the actors playing theatrical archetypes. The lowlight has been 2008’s Australia — for which Baz Luhrmann shoulders the primary blame, but anyone associated with that script should have had their Writers Guild membership suspended at least until the screams of unprepared ticket buyers stopped.

This play, too, seems to have inspired enthusiasm only for its performers in its original West End run. (Oddly, however, it’s been a long-running hit in a Finnish adaptation.) It seems doubtful anyone was chomping at the bit to make a movie version. But then in one of those periodic reminders that the ways of show biz (when not strictly commercial) can be unfathomable, it has found new life as the directorial debut of … 75-year-old American actor Dustin Hoffman.

Which ought to be more interesting than it turns out — with its workmanlike gloss and head-on take on the script’s very predictable beats, Quartet could as well have been directed by any BBC veteran of no particular distinction. The English countryside can be counted on to look pretty; this cast and its hundreds of years of experience (including those members identified at the end as former classical musicians) need hardly break a sweat realizing such soft material.

So, Maggie Smith arrives at Beecham House to the varying delight of former operatic colleagues Pauline Collins (comic ditherer), Billy Connelly (randy old goat), and Michael Gambon (nasty old queen), as well as the initial dismay of Tom Courtenay as the ex-husband whose heart she carelessly broke. Naturally, the joint is in danger of closure and can only be saved by the starry new arrival’s participation in an annual charity performance. Yes, it’s just like the plot of Roller Boogie (1979), and every other hoary “Let’s put on a show to save the [blank]” exercise. You know just what’s going to happen — “How dare you!” turns to “Oh, all right then” turns to triumph, although the film (like the play) cheats by declining to actually show us that triumph — and it does, on cue, for 98 digestion-easing minutes.

There’s certainly nothing wrong with providing vehicles for beloved older actors — but why does it always have to be this kind of vehicle, bland as toast and no more nutritious? Even Dame Maggie Smith doesn’t seem particularly interested; no doubt she’d like to play someone to whom the adjective “bitchy” doesn’t apply once in a while. The classical canon is full of great roles for fully mature actors. But for the movies, it seems, after a certain point you only get to play silly old dears or bitter crones. There’s got to be room for something between condescending trifles like Quartet and the bleak staring-death-in-the-face of Amour.