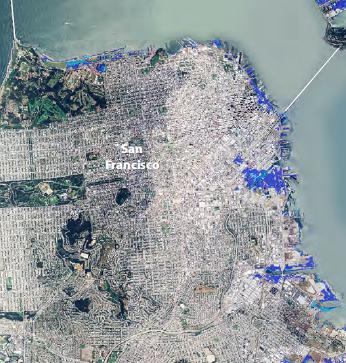 It’s good the Chronicle is taking on climate chance and sea-level rise. It’s good that Carolyn Lochhead is writing about the reality that storms like Hurricane Sandy are part of our future and that all types of coastal development are now at risk. It’s scary:

Naval bases, power plants, ports, highways – trillions of dollars of investment – sit on U.S. coasts because it once made sense to put them there. As people flocked to the shores, tiny beach towns became cities. Congress is hardly maintaining roads and bridges; its appetite for giant new sea walls around New York Harbor has yet to be tested. “You may be able to have the government rebuild New Orleans, and maybe you could have the government rebuild from Sandy,” said John Englander, author of “High Tide on Main Street,” a book on how rising seas will affect the coasts. “But as sea level rises and reclaims shoreline all around the United States and all over the world, governments can’t afford to reimburse that. It’s not just Miami, it’s Charleston, it’s downtown Seattle, it’s Sacramento, it’s every coastal city and city on rivers.”

Oh yes — and it’s San Francisco, where sea-level rise doesn’t seem to be an issue in the city’s plan for massive real-estate development on the waterfront.

The Chron has a map of what the Bay Area might look like after a two-foot increase in sea levels and a six-foot increase. It looks like this.

Of course, it might be okay because we can build super-tech levee that will create artificial waterfalls and protect us all from living on islands.

(You could argue that climate change isn’t about new technology, but that would be no fun — and would require actual political leadership.)

Anyway, here’s the problem with the Chron’s map: It makes San Francisco look just fine. The entire city is in white, safe from that pesky inundation that will ruin lesser parts of the bay.

Thing is, the Bay Conservation and Development Commission has spent a ton of time on sea-level rise, and has its own map, that’s a bit more accurate, or at least more detailed — and that shows some major-league problems for this city.

Check out the areas in blue: It’s most of the northen and eastern waterfront. That includes not only Mission Bay, where the city is pinning its hopes for a biotech boom, but also the site of the Warriors Arena, 8 Washington, and 75 Howard. In other words, the plan to make the waterfront into a heavily developed entertainment and residential neighborhood isn’t going to work for very long — unless everyone gives up his or her car and buys a boat. Or unless we, the taxpayers of San Francisco, spend billions protecting all this development that doesn’t make sense in the first place.

Oh, Treasure Island’s going to be a much smaller island, too.

It’s entirely possible — and likely — that state, federal, and local tax money will go to protect some essential, vulnerable coastal areas. It makes no sense to try to move both the San Francisco and Oakland airports; we’re going to build barriers to protect them. But how are we going to protect an arena that’s built out over the water when the water starts to lap up to the doors? Who’s paying for that?

The Chron has done a good job asking the questions at the national level — but, just as we so often see with economic inequality and tax policy, nobody wants to bring the message home.