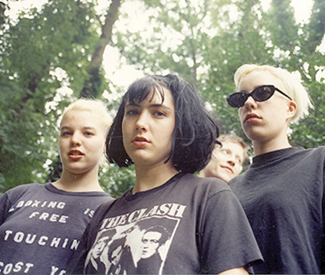 TOFU AND WHISKEY You should know how significant the forthcoming sentence is for me. Like, when I think about it, my heart speeds up a tick. I get that fluttery, crush-style, first-discovering-feminism blood pumping something fierce. Here it is: so, I was talking to Kathi Wilcox, of Bikini Kill, the Frumpies, the Casual Dots, and Julie Ruin…that’s about as far into it as I can get for now.

Take a breath. I’ll start again. The music that Wilcox helped create in the early 1990s riot grrrl scene along with Toby Vail and Kathleen Hanna deeply affected, empowered, and inspired a generation of women — and continues to do so. Bikini Kill technically existed from ’90 through ’97, now however, there’s a new chapter. The former Kill Rock Stars group started its own label — Bikini Kill Records, naturally (www.bikinikill.com) — and it recently began re-releasing albums, beginning with the 20th anniversary reissue of the band’s debut 12-inch EP. As a fan who became aware of the band the very year Bikini Kill fizzled (I was 13), it’s been my cruel fate to forever be indebted to a dormant group. Until late last year.

You can now perhaps grasp my Tiger Beat-sized fawning over Wilcox, who’s chatting with me from her home in Brooklyn, which she shares with Guy Picciotto of Fugazi and their 7-year-old daughter. In the interest of journalistic integrity, I’ll have you know that I steadied my voice, and never let on to the Bikini Kill tattoo on my left shoulder.

The creation of the Bikini Kill label came after Vail and her sister Maggie were laid off from Kill Rock Stars.”If there’s loyalty and it’s your community and you want to support that, or the other bands on the label feel like your scene, I can understand wanting to stay, but for us it didn’t really make sense. We were just like, well we should just do this ourselves,” says Wilcox.

Plus, they wanted to make sure the records stayed in print, and there was that 20th anniversary of the first record milestone. I ask if there’s any nostalgia in excavating youthful sonic archives of one’s past.

“I’m not sure if nostalgia is right the word,” she says. “It’s surprising to me, going back over a lot of this, not that people are still interested — although, in some ways, I do feel a little bit surprised about that. Like, I’m surprised that we’re having this conversation 20 years later.” Boom-boom, my heart beats faster thinking of myself as part of this conversation. “Maybe it’s just because there’s been so much ’90s nostalgia in the air that I feel like I’ve sort of worked it all out of my system?”

We talk about that moment in ’92 when a leery fascination with riot grrl and its Olympia and DC hotspots was all over the mainstream media for a blip.

“We had seen what had happened with Nirvana…We watched the media take this band we knew — and they were good, we thought they were great — but we had no frame of reference for what happened to them. Then they trained their eyes on us. We were weary of that whole process. We had no desire to be like, on the cover of Rolling Stone. That was not our goal at all. We’re just the next piece of chum thrown in the water there.”

Their actual goals and desires were in plain sight, in their zines, lyrics, written across Hanna’s stomach in permanent marker.

“We were trying to create a community where women and girls felt like they had a scene; we wanted young women to start bands. That was our scene: an underground women’s, feminist network.”

Though the decades between now and then seem to have softened her views of the unwanted attention.

“In hindsight, probably there were some good things that came out of [the media attention], because I’ve met a lot of girls who’ve been like, oh I heard about your band through an article in Newsweek. So as much as it bothered us to be misrepresented, I understand now that a lot of positive probably came out of it for other people.”

One project that came after BK was Julie Ruin, Hanna’s pre-Le Tigre lo-fi solo project for which she released just one full-length album, recorded in her bathroom. In 2011, she resurrected that project with Wilcox in Brooklyn, along with guitarist Sara Landau, keyboardist Kenny Mellman, and drummer Carmine Covelli. The new Julie Ruin record will see release in the spring, and the band will likely be touring this summer.

Lastly, we talked about bands that were influenced by Bikini Kill’s positive feminist agenda. There were the somewhat obvious, more linear answers such as contemporaries Sleater-Kinney and the Gossip, and a surprising one.

“The only thing I can think of is kind of ridiculous, but Lady Gaga. She’s obviously not influenced by us at all, right?…But I was reading an article about her that she’s offering counseling to her fans on her next tour. I have no idea how that’s going to work. But I was like, she must be having that dynamic because she’s so queer-positive and got a lot of people coming to her shows that are working through issues and coming against the bullshit of society. That seems like a parallel of what we went through. I was like, we should have had a counselor with us! Of course, that was Kathleen.”

Speaking of Lady Gaga, I found myself at her Born This Way Ball Tour show at the HP Pavilion in San Jose last week. Purely from the entertainment angle, it was eye-popping madness, a glittering frenzy of spectacle, antics, costume changes, and showmanship. A fairytale castle on the stage housed all the secrets, bursting open on command with sculpted dancers, surrounding their alien queen, alien she — Gaga.

After the lights snapped off and lasers began darting towards the crowd of costumed little monsters, Gaga rode out on a human-pony encased in a diamond-crusted, insect-creature body of armor, shielding her face and draggy blonde ponytail. From there out, there were hovering Victorian ghosts, inflatable pregnant bellies birthing dancers, human-motorcycles, floating alien heads, a rotating closet in what looked to be a teenage girl’s bedroom, meat curtains, meat grinders, meat couches, guitarists in turrets, and a keyboardist in the center of a circular synth.

But beyond all that, there was Gaga herself, a perfectly gritty, makeup-smeared, loud-as-hell, pop megastar who seems like a sugared-up theater kid. She told the crowd on numerous occasions that, like her, they were born this way. And like her, they shouldn’t give a fuck what people think. “Right, Black Jesus?” she asked her dancer, Black Jesus. “And no fucks were given.”

At one point she told all to check their phones, and called up a random audience member. The spotlights found a 42-year-old mother of twins. Gaga gifted her an inspirational piano ballad, invited her backstage for a shot of whiskey, then said she’d (along with a corporate cell phone sponsor) be donating $5,000 to a local, LGBTQ-friendly homeless shelter because she’d picked up the call.

Clad in a Gaultierish yellow beekeeper costume, she reminded, “tonight is about individuality, uniqueness, and acceptance!” Ungodly screams. “I am not a woman, I am not a man, I am…you!” The lights rose to show a thousand beaming faces.

I’m no cynic. Despite the overwrought theatrics and pomp, I can get with the message. She’s Madonna for the everywoman.

The soul troubadour returns. Aside from his debut double-album, The Headphone Masterpiece (Ready Set Go), Roots collaboration, and brief 2010 EP Black Skin No Value (Vibration Vineyard), singer-songwriter Cody ChesnuTT just hasn’t been on the radar enough, given his powerful pipes. He brought it all back in late 2012, releasing socially-conscious soul gem, Landing on a Hundred (Redeye Label), which he’s touring on now.

East Bay punk trio High Castle announced its amicable split on Facebook: “…High Castle decided to call it quits. No juicy gossip or drama. Shaggy is playing around town with her new project May B Knot and solo shindig, Sunny Reaper. Erin started this new band called Straight Crimes. Wilson should be playing trumpet, bassssss or geetar soon in something very rad. Very xtra mucho kudos to anyone that helped us out in any way!!!!!! We might still do a final show in the Bay Area and we will probably be releasing 3 final songs that we recorded.”