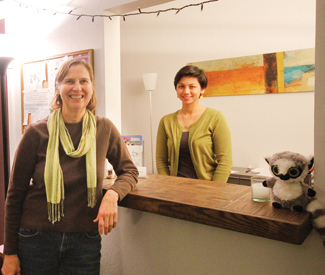 HEALTH AND WELLNESS When New Leaf Services closed its doors in 2010, after 35 years of providing vital mental health and substance abuse services to the queer community of San Francisco, a huge gap was left in its wake. New Leaf was the victim of budget shortfalls when the city reduced funding allocated for various nonprofits.

In response, four like-minded New Leaf colleagues — Nancy Heilner, Chris Holleran, Stacey Rodgers and Joe Voors — banded together to create a safe space in which LGBTQQI (Lesbian, Gay, Bisexual, Transgender, Queer, Questioning, Intersex) people can receive client-directed services specifically oriented toward their community. Just days after the closing of New Leaf, the four opened SF Therapy Collective, a marriage and family therapist corporation owned and operated by the colleagues in the heart of the Castro.

In July of 2011 the group launched Queer LifeSpace, an LGBTQQI-focused nonprofit counseling agency located on the same floor as SF Therapy Collective that provides quality, low-cost mental-health and substance-abuse care with a focus on people who have been historically marginalized or who are at risk, as well as individuals who belong to underserved communities.

Although the four colleagues supervise and serve as the staff for Queer LifeSpace, the nonprofit’s services are provided by a team of nine trainees who come from four different graduate schools in the Bay Area, as well as six volunteer postgrad interns who receive LGBTQQI-specialized training hours to count toward their licensure.

Included in Queer LifeSpace’s roster of services are support groups for trans and gender-variant individuals, queer people of color, individuals seeking to address such issues as men’s relationships, and sober folks, and the intersex community (the sole services of their kind available in the city.) The operation has been tremendously successful, having provided 1,800 units of service to 215 clients as of December 2012 — a goal they hadn’t anticipated reaching until the end of 2013.

Queer LifeSpace was founded not only to provide services that had previously been available at New Leaf, but also to serve as a vanguard institution for the next generation of queer trainees in psychotherapy. Given the tenuous nature of government funding for nonprofits, the formation of the service was a risky undertaking, and one that the group commenced against the advice of nearly everyone they spoke to.

As executive director Nancy Heilner recalls, “It wasn’t our intention to open a nonprofit, but what happened was people began calling and needing services at a fee lower than what we offered [at the Collective]. We also discovered that we couldn’t have a training program if we were to remain a for-profit corporation. And having a training program was something we felt really strongly about.”

What’s most remarkable about the service is that it’s entirely volunteer-run. As Heilner describes it, Queer LifeSpace has been a “labor of love. Nobody gets paid for it. We have donated at least half our workweek to making it a reality.”

In spite of their success to date, the colleagues recently learned that the lease for Queer LifeSpace cannot be renewed after April. As the staff and board of the nonprofit look toward the future, they are eager to reach their fundraising goal of $60,000 to cover the costs of moving and establishing plans for a long-term center that can serve 350 members by the end of 2013.

Eventually, they hope to expand their capacity for clients and trainees in the new space and develop a financial model for long-term success and sustainability. But in the meantime, they face the crisis of not having a home in the spring.

As Heilner made clear, “Our next step is finding funds to sustain growth and reach. We’ve been reassuring people that we will make it through this. We will.”