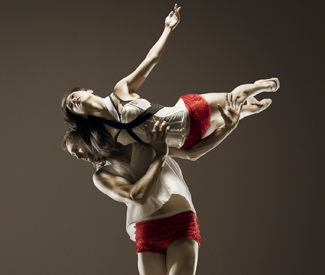 DANCE In a pre-rehearsal conversation at the ODC Commons, choreographer Robert Moses says that his newest piece, Nevabawarldapece (“never be a world of peace”– premiering at YBCA Fri/25-Sun/27), is “a dance about protest movements.” The evening-length work is set on ten dancers and is a collaboration between Moses and Obie and Bessie winning writer-performer Carl Hancock Rux; activist and singer-composer Laura Love; and MacArthur Fellow and blues musician Corey Harris. The trio will perform live during this weekend’s world premiere at Yerba Buena Center for the Arts.

The impetus for Neva, explains Moses, came less from the specifics of historic revolutions and contemporary challenges to the social order than from the people who gave their all attempting to bring about fundamental change — only to see their efforts dissipated, co-opted, or met with failure. “It’s about idealism, the loss of it, and then what you do? What are you left with if the rage, the energy, and all the sacrifices you have made fall by the wayside? Can you pick up and keeping moving forward? I don’t know,” he says.

Moses and Love, who is in town for her first look at the company, discussed leaders like Malcolm X, James Brady, and Nat Turner, but also contemporary movements like Occupy Wall Street, the Arab Spring, and environmental activism. Referencing Sisyphus’ rock, Moses says, “When it falls, it’s hard to go down that mountain and pick it up again. It takes courage and energy to roll it and believe that this time it just might stay up.”

For Love the choice is clear. “I have moments of disillusionment, and moments when I believe that we can have justice. Right now I am more afraid not to act than to act.” She remembers a banner at a recent Freedom of Choice rally that said: “I can’t believe that we have to do this again.”

Neva had been in the back of Moses’ mind for a long time. “It’s a big idea,” he admits. So he was pleasantly surprised that when he called his now collaborators and described exactly what he wanted to explore, everybody agreed to participate. For Love, it was Moses’ willingness to not restrict her role. (Moses laughs, “I can’t do what she does, so why would I restrict her?”)

Love and Harris sent him musical suggestions; Hancock Rux emailed texts he had written. Moses has yet to determine Neva’s final shape. For instance, he has two versions of one of Love’s banjo tunes. He also wants to hear Hancock Rux’s voice reading text. “I don’t want to pin myself down, because when we get together I want to see how context and content push against each other.”

Heading into rehearsal, he chuckles, “Yeah, the piece is finished … and it is not.” A thread, he knows, will emerge when everybody finally meets in the studio a few days before the premiere. Right now, he explains, the dancers have between 30 and 40 choreographic sections from which choices will be made.

In the studio on this particular afternoon, the dancers work on three of these pieces. As other couples observe and copy, Moses refines small gestures — a handgrip, a leg stretch, an overhead lift — on tiny Norma Fong and lanky Brendan Barthel. Then Crystaldawn Bell, softly but intensely, talks the company through a section that she has developed based on a solo which Moses had created for senior dancer Katherine Wells. Finally, Moses gives newcomer Jeremy Bannon-Neches five minutes to keep teaching to the company a piece he had choreographed for him. “The teaching is good experience,” Moses notes.

Dripping with sweat, tired to the point of exhaustion, and throwing themselves with every ounce of their being into fierce, volatile, and ever-changing movement challenges, the dancers are an odd contrast to the studio’s serene and neutral environment. They are also unstoppable — just like those who are willing to commit whatever it takes to make their ideals come to life.