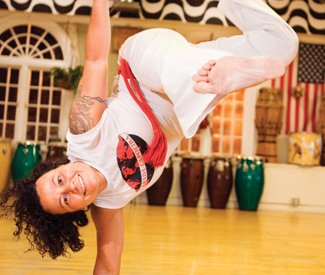 HEALTH AND WELLNESS It is impossible to climb the stairs to the San Francisco chapter of Abadá Capoeira and not know that you are in the Mestranda’s house.

Márcia Treidler founded the Mission District capoeira school, and she is there in the first photograph you see when you come in off the street. In it, she strikes her customary pose, an improbable one-handed flip (kick?) Her washboard abs challenge visitors to trade sedentary habits for the rich traditions and fat-carving core moves of the Brazilian martial arts form, the love of which made Treidler beg her mom for classes as a teenager, brought her from Brazil to the Bay Area, and led her to start a chapter of her teacher’s school right here in San Francisco.

In person, seated at a table next to Abadá’s statue of Iemanjá, orisha goddess of the Southern seas and patron deity of Rio de Janeiro, Treidler is hardly as intimidating. Mestranda Cigarra (her capoeira-given name) is in fact incredibly patient while explaining Brazilian history and basic tenets of the martial arts form to a stranger. She does do it for a living, after all.

Sharing information is a guiding principle of capoeira, which began as a covert form of fighting practiced by African slaves in Brazil who certainly couldn’t rely on written record to educate new generations in the martial art. After escaping servitude, some used their martial skills against the law enforcement sent after them. Capoeira helped fend off colonial attacks on their newly formed quilombos, the settlements ex-slaves built in remote locales.

Even after abolishing slavery in 1888, the Brazilian government considered capoeira subversive. It was officially banned in 1890, a tool used by authorities to put black men in jail. When waves of immigration brought new labor forces to the country and left many Africans jobless, public perception often equated capoeira with criminal activity.

The sport’s rise to acceptance and spread to other countries is a relatively recent occurrence. Treidler, who is now one of two of the highest ranking females in her school Abadá’s 41,000-member international organization, started practicing 31 years ago in Rio de Janeiro. She lived in Botafogo, a middle class beachfront neighborhood. At the time, capoeira still wasn’t considered respectable — and certainly not an obvious choice for an ambitious young woman. After becoming entranced by the sport at a school performance, the current Mestranda had to work on her mother for a year before she would agree to finance her classes.

“Women in capoeira was not popular at all,” Treidler says. “[My mother] was like ‘are you crazy? What are you thinking?'” Treidler had been active in sports — swimming and gymnastics — since she was six, but her mother insisted on observing capoeira classes before she’d agree to let her high school age daughter enroll.

“The [sport’s] reputation was really bad at the time,” Treidler remembers. “But when I first started, I never stopped.” Prepped by her athletic background, she took easily to capoeira’s acrobatics. She graduated through levels quickly, and struck a deal with her instructor to pay when she could after her mother withdrew financial support. Treidler credits the sport with teaching her patience, and became close with Mestre Camisa, the founder of Abadá.

The importance of their relationship today means Abadá students benefit from the vision of the founder, who still lives in Brazil. “She follows his vision 100 percent,” Treidler’s student and fellow Abadá instructor Antonio Contreras says. Camisa and Treidler are in constant contact, and he was present at the school’s January batizado graduation ceremony at Dance Mission Theater.

Eighty-plus students take classes at Abadá San Francisco chapter. They perform at places like the Academy of Sciences and in the Ethnic Dance Festival. The studio also offers Portuguese classes. Although there are only three adult Brazilians who currently take classes, the studio is somewhat of a center for Brazilian culture here in the city. Displays that tell of the legacy of capoeira line the walls in the main room, interspersed with statues of figures in traditional poses. Brazil’s world-famous street art duo Os Gemeos have whimsically rendered Abadá practitioners in large paintings that hang in the studio’s front stairwell, alongside the Mestranda’s portrait.

It is perhaps indicative of Treidler’s own start in the sport that her students are nothing if not diverse. At the recent batizado, the spotlight lingered on tiny children, middle-aged practitioners, developmentally-disabled capoeiristas sparring, flipping, playing musical instruments, and smiling tremendously in an immense roda, the circle of practitioners that encloses a capoeira presentation.

Treidler is the only instructor that Contreras, her only other full-time teacher at Abadá SF has ever had. An ex-personal shopper, he has called the studio home since 2000, when the sounds of single-stringed berimbaus and tambourine-like pandeiros pulled him into the studio after dinner at a Mission Street restaurant. He was amazed by the maculelê, the traditional dance that accompanies capoeira, and impressed by Treidler’s presence.

“I was like, ‘whoa, who’s that’ — this larger than life person,” he remembers. He was back that Tuesday for his first class. A cardio-weights gym rat who still employs a personal trainer, Contreras says that first day was the best workout of his life. He started noticing the changes in his body “immediately.”

“To me, it was very natural to learn from Márcia,” Contreras says, sitting next to a jar full of juice one afternoon at the studio. “The advantage is that she had it tough. She identifies with the difficulties you face because she has had her own.” He himself felt unflexible and uncoordinated when he first started his practice. He’s convinced that many instructors would have given up on him long ago.

But Treidler’s teaching eventually brought Contreras to a level of mastery that compelled him to quit his day job, to stop having to rush to the school from the stores every day at 5:45pm. Contreras says that the decision to commit to teaching is a natural part of capoeira.

Unlike other martial arts forms, in which the progressively more masterful levels of belt reward physical mastery of the form and discipline, capoeira reserves the next stage of training — and corresponding 10 colors of cords worn around your hips — for those who have displayed their ability to role model for others.

Treidler originally made ends meet here in San Francisco by working construction jobs, starting to teach capoeira a few times a week at SoMa’s Rhythm and Motion dance studio. She was deemed eligible for an “alien of extraordinary ability” visa by the US government and opened her first studio on Mission in between 19th and 20th Streets, moving to the current space 11 years ago.

Capoeira’s divergent skill sets — singing, playing musical instruments, sparring, and dancing — do seem to be a sport that can reward many kinds of students. Treidler resists generalizing when it comes to her students, but will say that the “women are very rational. Men identify with the power. I think that’s why it’s unique. We help each other in class.”

Capoeira is a good opportunity to let go of the “I’m sorry” hair trigger that plagues some females. “Women are too careful with each other,” the Mestranda says. “It’s like, I’m sorry? There’s no sorry! You get out of the way. That’s the challenge, for women not to think about it so much.” It’s difficult to picture Treidler hesitating — but then, she has been in rodas since she was 17 years old.

At the batizado in December, the Mestranda’s values of inclusion are as visible among her white-uniformed students as the high fives they can’t stop giving each other in the roda. After each class of graduates’ names are called, honorees “play games” — capoeira terminology for the minute-long sparring sessions that show off the flowing acrobatics and feigned violence of the sport. These run the gamut from the younger kids’ hyper, sky-high flips — done alongside each other as much as at each other — to the more focused bouts between older students. The latter range in tone from comical to rapid-fire serious. Everyone looks really good — er, healthy.

After a 2012 packed with performances, Treidler’s ready to expand her flock, make it possible for her part-time instructors to follow her path and leave their construction or restaurant job to focus on their passion for the sport. “What’s next you know?” she asks, somewhat rhetorically. “How can we use capoeira to make the world a better place?”