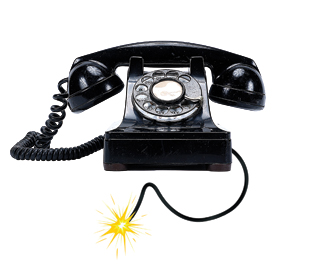 The market for smart phones has reached the saturation point in the United States; it’s hard to find anyone who doesn’t have a mobile device. Hard, maybe — but not impossible. There are still thousands of people, many of them seniors, who rely on that old-fashioned, low-tech landline for their inexpensive connection to the world — and they’re about to lose out.

The deregulation of the telecommunications industry has reached the point where phone companies in California and elsewhere are getting ready to pull out and disconnect the copper wires that support traditional landlines — which, by law, have to be made available at dirt-cheap rates to low-income people.

And while so-called Lifeline rates for cell phones are coming, they aren’t available yet.

“It’s extremely important,” Nick Pasquariello, a senior and low-income resident of San Francisco who uses a landline with a Lifeline rate, told us. Like many seniors, Pasquariello says his old phone is cheaper, more reliable and simpler than a wireless plan.

“The technology and rates are changing all the time. It’s confusing,” he says, adding that the end of landlines would be detrimental to many people. “I haven’t heard of Lifeline for cell phones.”

So over the next year or two, seniors could find themselves disconnected. “It’s clear to us that companies like AT&T and Verizon are planning to get rid of their copper networks,” said Paul Goodman of the Greenlining Institute in Berkeley, which conducts public policy research and advocacy. Telecom companies have spent years lobbying to retire those lines, arguing that they’re expensive to maintain, which explains why they’ve been remiss when it comes to their upkeep.

“The phone companies are not repairing or maintaining old copper networks. They don’t want the responsibility,” Goodman explained.

Basic utilities like phone service have long been considered necessities and legislators have ensured that every household has access to them.

But replacing copper with newer technology makes better business sense. “It’s more lucrative to operate the VoIP and wireless networks,” Mark Toney, Executive Director of The Utility Reform Network, or TURN, told us. “They’re able to charge more per month and the profits are greater.”

The deregulation of phone service is nothing new; it started back in 1984 with the break up of AT&T. But it’s reaching the point where there’s little oversight at all.

In 2011, lawmakers in Wisconsin passed the Telecommunications Modernization Act and last year, virtually eliminating state regulation of phone companies. In New Hampshire, Governor John Lynch signed a similar bill into law. In California, SB 1161 went into effect a few months ago, lifting the California Public Utilities Commission’s regulatory power over internet-based phone services like VoIP and IP, among other things.

The bill’s passage caused consumer advocates to argue that deregulation would lead to price gouging and unfair business practices like cramming (or unauthorized third party charges found on a customer’s bill).

“We’re concerned with making sure consumers and seniors still have their protections which we think should apply regardless of the technology,” said Michael Richard, associate state director of advocacy for AARP.

As the telecommunications industry has upgraded its products and services to accommodate newer technology, the CPUC has been forced to rethink its idea of what basic service looks like. Bill Johnston, Telecommunications Advisor to CPUC Commissioner Catherine Sandoval, told us the commission is working to make improvements.

But the service isn’t yet available for wireless or VoIP — and some fear that the current program will eclipse before a new one is in place. Johnston said a meeting is set for January 29 to discuss the scope of rules for Lifeline, and public hearings will be held around the state later this year to address this and other issues related to telecom deregulation.

The argument that landline phones are dying out may have some validity, but their benefits and practicality are evident — take for instance weather emergencies. After Hurricane Sandy struck the Northeast a few months ago, many towers providing service to cell phones went down. Landline users, however, were unaffected and still able to get in touch with family and emergency services.

According to Johnston, the commission is well aware of the benefits. “They want to make sure the wire line remains available because it has traditionally been the more reliable service.”

The notion that landlines phones are becoming obsolete has some consumer advocates rolling their eyes. “Most people in California have both cell phones and landlines,” said Toney.