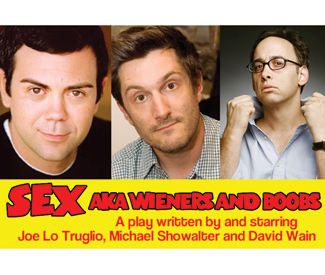 THEATER SF Sketchfest, running this year Jan. 24-Feb. 10, has changed the face of comedy in the Bay Area. It has done this by importing faces, many very funny faces, and mingling them with a complement of local ones. The precise composite changes yearly but, 12 years on, the juggernaut founded by David Owen, Cole Stratton, and Janet Varney has developed one of the largest comedy profiles in the country. My spellcheck may still not recognize improv as a word, but there’s no denying the influence this festival has had on the Bay Area’s exposure to the greater world of comedy.

Fans of drama may wish to know that this year’s comedy feast — which again unfolds across everything from standup to game shows to film-related events — also includes a little theatrical soufflé called SEX a.k.a. Wieners and Boobs, a 1998 work for the stage penned by State cofounders Joe Lo Truglio, Michael Showalter, and David Wain. The play, although hardly what you’d call regional fare, has since been published, and gleefully mounted by amateur companies here and there. But its creators — who famously went on to other things, including films such as Wet Hot American Summer (2001) — are only now revisiting the work themselves.

Lo Truglio explains that the genesis of the play was owed to Maria Striar, founder of New York’s Clubbed Thumb theater company, who in 1998 called up her old Brown University classmate Showalter with a last-minute invitation.

“They were doing a summer series, and one of the plays had dropped out,” recalls Lo Truglio by phone from Los Angeles. “So Maria called Michael Showalter and said, ‘Do you guys have anything you want to do?’ He said yes immediately. The catch was that we didn’t have anything ready. So we had to write the play in about three days.”

They started with the title, according to Lo Truglio, only because Striar needed to place an ad in the paper the next day. Coming out of theatrical left field, he acknowledges that a grabber was in order. “We just came up with that title to get people to come see it,” he explains. Taking no chances, the ad also promised a scene from David Mamet’s Glengarry Glen Ross — a claim the authors later make good on in one of the play’s brasher non-sequiturs.

The plot was borrowed from High Noon and set in a Teaneck, New Jersey menaced by a cranky desperado named Tad Theaterman. That narrative spine supports some wayward elephantine flesh, including a meta-theatrical opening scene involving a Q&A with the audience, and the aforementioned segue into Mamet (pronounced “mam-AY” in the play). Other moments were derived from previously untapped material, as Lo Truglio remembers.

“We had some bits that might have come from, probably not the State, but some stuff that David [Wain] and Showalter did at Stella, when they were doing live shows in Time Cafe on Lafayette in New York City. I also performed there and did some characters. I think a few characters and maybe a couple of the scenes in SEX were born out of that. But the majority was just this new-sheriff-in-town idea. We have a scene from Glengarry Glen Ross, because we just thought would be so cool to perform. [The process] went along those lines: what kind of thing would we like to see in a play? What bit do we have that we haven’t been able to use anywhere else?”

San Francisco audiences will be the first to see what this late 20th-century opus looks like in the garish light of a new millennium, with its creators in the roles they originated 15 years ago.

“I have no idea how it’s going to play after so many years,” admits Lo Truglio. “It’s very vignettey, which is a new word I’m coining. Looking back now, I think we would have cut out a lot of it. But it’s only about 55 pages anyway.”

A glance at the script suggests there’s still gold in them there pages, and anyway it’s hard to imagine the play’s triumvirate disappointing an audience reared on the State and all the subsequent work it has spawned. For his part, Lo Truglio looks forward to returning to a festival he recalls fondly and sees as essential.

“It’s fantastic that Janet Varney and the rest of those guys have created an annual event where really the best people in comedy go to perform,” he enthuses. “I think it’s important. It’s very similar to the way I feel about Marc Maron’s podcast, which I think is a terrific, really important record of some amazingly talented comics and actors. At Sketchfest there are so many people who are interested in comedy, different types of comedy, that it creates a terrific environment for it to thrive.”

SEX A.K.A. WIENERS AND BOOBS