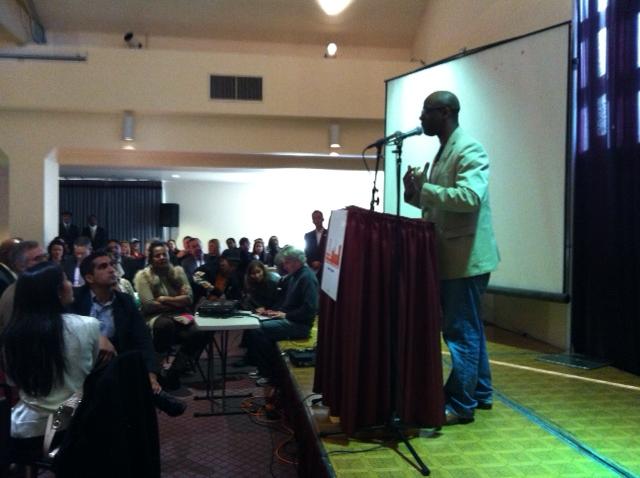 Labor leaders and a plethora of elected officials from San Francisco – including almost the entire Board of Supervisors – began today at the San Francisco Labor Council’s annual Martin Luther King Jr. Breakfast. They heard inspiring words from speakers on hand, but not from President Barack Obama, whose inaugural address wasn’t broadcast at the event as planned due to technical difficulties.

Yet the ideals voiced here at the West Bay Conference Center on Fillmore Street echoed those sounded on Capitol Mall in Washington DC, channeling the spirit of Dr. King in calling for us to take bold collective action to better care for all people and the planet.

“My fellow Americans, we were made for this moment, and we will seize it as long as we seize it together,” Obama said in his speech. “For we, the people, understand that our country cannot succeed when a shrinking few do very well and a growing many barely make it.”

At his invocation here in San Francisco, Rev. Floyd Trammel, called for a “clarity of thought and unity of purpose” and cast Obama as the inheritor of King’s legacy. “In many ways, you sent one, Dr. Martin Luther King Jr., to pave the way for another, President Barack Hussein Obama,” Trammel said in his prayer.

Sen. Mark Leno – speaking in the place of Mayor Ed Lee, who is in DC for the inauguration – quoted the late Supreme Court Justice Louis Brandeis, who said, “We can have democracy in this country, or we can have great wealth concentrated in the hands of a few, but we can’t have both.” And while Leno praised those present for helping pass Prop. 30 to begin turning around California’s fiscal state with higher taxes on the rich, Leno also said, “The work is just beginning.”

It was a theme echoed by the most dynamic speaker on the program, Thurgood Marshall High School teacher Van Cedric Williams, who said the theme of both MLK Day and Obama’s inaugural address was that there is still much work to do to realize King’s dreams of social and economic justice.

“I believe community and labor are working on the unfinished business that Martin Luther King started,” Williams said, calling it a moral imperative to help create a better world for all. He called on those present to really “embrace your fellow community member,” those of all races and backgrounds, to pursue the solutions the world needs.

“They have to see the passion,” Williams said of young people today, “they have to know we got their backs.”

It was a call for Americans to move beyond our narrow self-interest. As King once said, in a quote included at the MLK memorial in SF’s Yerba Buena Center, “An individual has not started living until he can rise above the narrow confines of his individualistic concerns to the broader concerns of all humanity.”