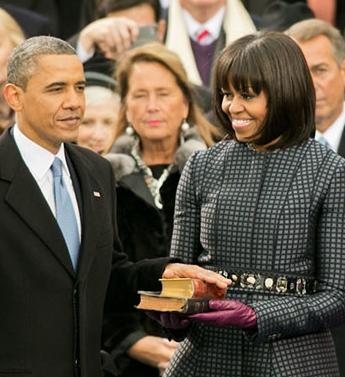 Second inaugration speeches are hard; you have to be political without sounding partisan, inspiring without being divisive — and promise change and progress even if you haven’t accomplished what you wanted in the first term. The Obama address surprised me: He went left, making clear that he wants economic and social equality to be his final legacy. It’s getting rave reviews in the lib-blogosphere, where it’s been described as the speech liberals have been begging him to give for years. You can’t argue with the content — he mentions gay rights, global climate change, equal pay, protecting social security, economic inequality, the need for collective effort … he even talks about reforming the tax code.

So now comes the hard part: The struggle for economic justice has to go beyond a compromise plan that limits higher tax rates to people earning more than $400,000 a year.

In fact, the best thing I read this weekend was a NY Times piece by Nobel-Prize-winning economist Joseph Stiglitz, who argues forcefully that continued economic inequality is prolonging the recession. It’s also destroying the nation’s future:

Our skyrocketing inequality — so contrary to our meritocratic ideal of America as a place where anyone with hard work and talent can “make it” — means that those who are born to parents of limited means are likely never to live up to their potential. Children in other rich countries like Canada, France, Germany and Sweden have a better chance of doing better than their parents did than American kids have. More than a fifth of our children live in poverty — the second worst of all the advanced economies, putting us behind countries like Bulgaria, Latvia and Greece. Our society is squandering its most valuable resource: our young.

Stiglitz says what few in Washington want to admit: We can’t get the economy going again without rebuilding the middle class, and we can’t do that without higher taxes on the rich and a lot more public investment in education. Oh, and all this talk of how it’s out of our control is bullshit:

There are all kinds of excuses for inequality. Some say it’s beyond our control, pointing to market forces like globalization, trade liberalization, the technological revolution, the “rise of the rest.” Others assert that doing anything about it would make us all worse off, by stifling our already sputtering economic engine. These are self-serving, ignorant falsehoods. Market forces don’t exist in a vacuum — we shape them. Other countries, like fast-growing Brazil, have shaped them in ways that have lowered inequality while creating more opportunity and higher growth. Countries far poorer than ours have decided that all young people should have access to food, education and health care so they can fulfill their aspirations.

Makes me think about some of what I hear out of San Francisco City Hall. Oh, we can’t do anything about economic inequality; that’s a national issue. Or maybe it’s a state issue. I bet there’s not an elected official in town today who woudn’t proclaim complete agreement with everything Obama just said — and there are very few of them who are trying to bring that message back home.

In San Francisco, we give tax breaks for businesses that create high-end jobs that drive poor people out of town. We happily seek development without considering the impact it will have on existing vulnerable populations. We even struggle over free Muni for low-income youth. We do nothing — nothing — to reclaim wealth from the 1 percent and put it into local housing, public education, and job-training that could make a dent in our local economic inequality.

Mr. Mayor: Are you even paying attention?