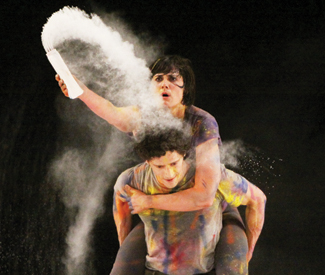 THEATER/DANCE Choreographer Mary Armentrout’s itinerant, site-specific performance installation, reveries and elegies, passed through CounterPULSE last weekend. A post-solstice meditation on dislocation and flux, it was also the harbinger of a striking new season at the SOMA performance incubator. In fact, reveries and elegies, true to its theme of displacement, can be considered the odd one out among programming whose defining structure is the duet.

If you’ve followed the vicissitudes of programming at CounterPULSE even intermittently, a glance at this year’s calendar prompts a double take for the careful concentration of work and the thematic consistency it evinces, in addition to its impressive international lineup. The rigorous queering of the duet structure underlined by the series, for instance, comes further elaborated through complimentary work like DavEnd’s well-received 2012 debut, F.A.G.G.O.T.S.: the Musical! (which turns on a duet of sorts with a wall mirror) as well as some rich auxiliary events.

The duet form (and the act of reimagining it) is an apt metaphor for the programming model behind the season too, which represents something of a departure from business as usual.

CounterPULSE’s Julie Phelps, central in the development of the season and currently serving as interim artistic and executive director for Jessica Robinson Love (who is on sabbatical), explained that the Queer Series and the season as a whole had emerged from some serious rethinking at the organizational level.

“We were sort of primed to embark on this new season, which [comes directly] after our strategic planning process, where we really identified who we are, how we do what we do, and what limits we still have on our impact.”

Phelps says one limit they identified was a single-minded commitment to the bottom line that was keeping certain kinds of work almost permanently out of reach — for example, much work by touring artists from out of the state or country, for which there is relatively little foundational money available for tapping.

“We’re actually, financially, a very conservative organization,” says Phelps, “which has brought with it a lot of stability — very important especially in the young years of an organization, but ultimately stopping us from taking risk on vision. We were always on a break-even model. Either it needs to be some mix of foundation support or some other kind of funding with some tickets sales. The bottom line always has to equal zero. So we’ve been pushing ourselves to think bigger about the types of risks that we can take.”

That’s far from inviting recklessness, Phelps stresses, but it does mean modifying notions of financial success and failure, bringing them in line with an artistic spirit of experimentation and what might be thought of as the useful flop.

“Actually, failure is just as valid a result as success,” says Phelps. “When we had been building failure out of every income model we had, we’d also been building out risk from some of the artistic selections, and from the way we were making artistic selections. We’ve really only just recently moved into curating in the first place. Before we were like, we have a space, if you want to do a show, come ask us and we’ll work it out. [In this] season, every artist was someone we approached and worked with, found out ways that they could intersect with CounterPULSE, what was financially viable for us and for them, what was artistically interesting for us and for them — actually build something from the inside out, instead of the outside in.”

Despite the considerate design in the program, Phelps calls it more art than science and insists it’s all “still a very organic process,” noting that the queer label is at least partly one of sheer convenience.

“I mean, ‘queer’ is basically the only banner that you could fly over that season, and only because it is so indistinct — because actually each of these works is hugely different. So there’s still a patchwork element to it, but it’s a little bit more deliberate [than usual],” she explains, laughing at the metaphor carrying her away. “At least the patches were picked out, and the fabric was cut to shape before they were added to the quilt this time.” *