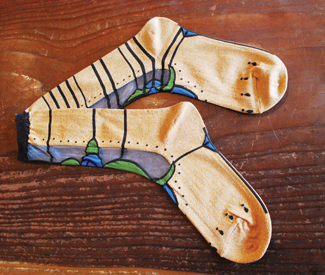 STREET SEEN First, I saw the socks. Half sheer, half solid, the pair’s blue rose design made me flash on stained glass cathedral. Like a sock-crazed zombie, I turned on my heels and entered the most unassuming, unmarked shop on Hayes Valley’s row of quirky boutiques and designer collections.

The pair was wildly expensive, and not being a swanky sock kind of lady, that threw me. But Japanese import shop Cotton Sheep is not for those unacquainted with the transformative power of superlative readywear. A few weeks later I was back for a tour, and to talk style philosophy with owner Eiko Critchfield’s son Rue, who credits his mother with awakening his own sense of personal flair.

“You can appreciate this story with your eyes closed,” Rue tells me, holding out an impossibly soft cotton scarf from his favorite of the shop’s handful of imported Japanese brands. The piece is by Kapital, a vaunted label that hails from Okayama, a town traditionally known for its indigo dye and denim. The true, deep blue of Kapital’s jeans, in particular, make them denim head cult items.

After Eiko impressed the company’s higher-ups with the fastidiousness with which she examined pieces in Kapital’s Japanese showroom, Cotton Sheep became the first American store to stock the brand, and the biggest US selection can still be found there — denim, hand-woven scarves, quirky button-down shirts, and of course, my wonder socks. The shop’s other brands include Merveille H, FITH, and Nuno. Each piece is handpicked for sale by Eiko.

“When you walk out the house with these pieces you know you are the only person in the country wearing them,” Rue says. He’s wearing Kapital khakis with an exposed, intricate button fly, and eye-catching strap along the backside waistband. Rue was a self-described jock before joining the family business (“sweatpants and white T-shirts,” he says ruefully), but got hooked on the line after Mom told him he needed a more fashionable dress code if wanted to work in the store.

Eiko certainly brought him up to appreciate a good outfit. She and husband Victor became pickers when they moved to San Francisco in the 1990s from Osaka, joining the hardy ranks of those who troll thrift stores for treasure, hustling to flip quality pieces to vintage stores for profit.

When they’d exhausted the Bay Area’s bins to their satisfaction, Eiko packed up the family into a Chevy Astro and took to the road, sending shipments of Americana (used Levi’s, Raggedy Ann dolls — Japan was nuts for anything that screamed “United States” at that time) to her boutique friends in Osaka whenever the van was too packed to fit more finds. “My parents relied on their sense of style to survive,” Rue says.

“I wanted to show people of San Francisco what I see in Japan that I know they would never find,” Eiko wrote me in an email when I asked her about her idea to open a shop across the street from the site from Victor’s now-defunct music store, BPM Records. “Our store is about an idea: to care for fabrics, to appreciate them, and to teach people that great fabrics will last you forever if you treat it with the care that I do.”

And please, do have care: Eiko’s a stickler for boutique etiquette, chiding those that enter with icecream cones from the Smitten kiosk down the block and cautioning careless types that don’t show the proper respect when handling her precious textiles. Check her Yelp reviews if you don’t believe me.

But the family’s about inspiring a different kind of relationship between us and our wardrobe, one with an emphasis on craftsmanship often lacking in the era of mega-brands and micro-trends. Who knows, maybe Rue will even talk me into those socks one day. “It might be a little scary to walk out of the store like that [with an expensive clothing item],” he laughs. “That’s my job, to help people be less scared.”