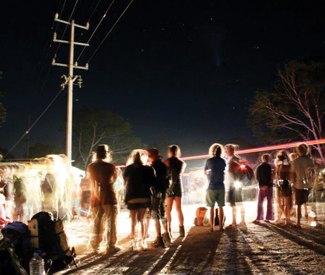 The Synthesis 2012 Festival, which marked the end of the Mayan Long Count Calendar, was supposed to be an opportunity to bring spiritually minded people together around the Kukulkan Pyramid in Chichen Itza, Mexico to help usher in a new age of cooperation and goodwill. That was the vision espoused by Executive Producer Michael DiMartino, a Californian who said he had been leading tours in the area for decades and setting up this event for years.

Instead, this anticipated moment of enlightenment became what can politely be called a clusterfuck, a descent into utter chaos for many volunteers and attendees. Hundreds of Bay Area people traveling to an uplifting holiday event found themselves stranded in an isolated location without the transportation, sustenance, or communications they’d been told would be available.

Now DiMartino is trying to settle a long list of refund demands, and there are threats of lawsuits on all sides.

When I first interviewed him about the festival, back in October, DiMartino was talking like a New Age prophet: “We, through our actions and intentions, create the world and take the path that we are creating,” he said.

So DiMartino is walking the rocky path of his own creation, facing recriminations for ignoring warnings about looming problems, and vilified both for his alleged managerial failures and for the sometimes appalling way he treated people.

About 150 people have joined the “Synthesis 2012 Scam Awareness” group on Facebook — which has barred Synthesis staff from joining the discussion — where they’re telling their stories of hardship and woe, sharing research into DiMartino’s history with other events, and organizing collective responses to the problem.

Micaela Teal Santos, who helped create and administer the Facebook group, told us her honeymoon trip turned into a nightmare of missing shuttles and meals and being forced to camp alone in the jungle after local authorities shut down the festival campground for several hours, missing the long-anticipated sacred ceremony at sunrise on Dec. 21.

It was one of many similar stories. People who were promised hotel rooms by DiMartino arrived to find those rooms had been given away to others and no vacancies were available — at a site far from any other accommodations. Shuttles that were supposed to bring revelers from other towns to the festival site never arrived, forcing people to spend hundreds of dollars on cabs or private shuttles, and volunteers who came early to create the festival often weren’t provided food or water at a site that turned out to be five miles from the nearest town.

Luckily for DiMartino, he has been surrounded by people who really do embody the positive, patient, and resourceful values that the festival was meant to highlight, from his co-producer Debra Giusti (founder of the Harmony Festival) to Tulku and the Bay Area crew that created the AscenDance stage to the many volunteers who stepped up to address the myriad problems and voids that manifested as the event unfolded.

“That’s the real story, it’s how people under extreme adversity came together to make this happen,” said Giusti, who has been working almost every day since the festival officially ended on Dec. 23 to deal with its fallout, from the attendees still stranded in Mexico without money to get back to the bus filled with festival supplies that still hasn’t returned, to the dozens of attendees who say they feel cheated by DiMartino.

Many of the DiMartino’s biggest critics have made efforts to remain positive and couch their criticisms in the New Age style of empowerment and acceptance but it’s clearly been a bitter disappointment to attendees who hoped the festival would be a launching pad into a new era of harmony and hope.

In an interview with the Guardian, DiMartino disputed many of the characterizations on the Facebook site, darkly warning that his lawyer is looking into “the bandwagon of people on a witch hunt.” But he repeatedly said that he takes full responsibility for problems at the event and accepts that he will probably lose a significant amount of money once the final accounting is done.

“There were logistical breakdowns, but that doesn’t constitute a scam,” DiMartino said, noting that he is issuing some partial refunds and “dealing with people on a one-by-one basis.”

But both in his public and private statements, DiMartino’s tendency to blame the festival’s problems on Mexico, or on volunteers, or on forces beyond his control — or, as he repeatedly told me, “systemic problems,” as if it was a system he didn’t create and run — has only added to people’s frustrations with the festival.

Giusti defends DiMartino as a “visionary” who has problems with organization and follow-through. “Michael would act like everything was handled and it obviously wasn’t. It was very frustrating.”

We heard many stories of DiMartino not responding well, an approach that seems to have helped create many of the problems at the event. Two of the more compelling and condemning narratives come from two longtime festival organizers, Xochi Raye and Corey Rosen, who say DiMartino responded vindictively when they raised concerns about looming problems.

Rosen didn’t actually attend the festival, saying he was forced out of his production manager role for raising questions about preparations, such as the ill-fated decision to save money on transporting materials to the festival by using a volunteer crew and bus, which was turned around at the border by officials with concerns for their safety.

Rosen goes so far as to say he doesn’t believe DiMartino’s claims to have made advanced reservations for shuttles and other services that didn’t materialize. “People were trusting that Michael had things taken care of, and when I wanted to double-check, people said we didn’t need to do that,” Rosen said. “Michael told me my negative comments would not create a positive outlook.”

DiMartino said his computer and many documents were stolen from his car in Playa del Carmen before the event, complicating festival logistics and making it difficult to provide the proof that people are requesting.

To those who believed that the end of the Mayan calendar, coinciding with other New Age beliefs that Dec. 21, 2012, would be signal the beginning of an era of expanded human consciousness, Chichen Itza was considered a place of spiritual power and significance. That clearly made people more trusting of DiMartino’s intentions.

Raye took over some of Rosen’s duties — and much more in Mexico, as problems developed in the run-up to the event. She wrote out a long narrative for the Synthesis 2012 Scam site that tells a harrowing tale created largely by DiMartino’s undelivered promises and bad behavior when questioned.

“Michael said he had been focusing on getting basic needs such as toilets and water in place by the time we landed, and yet basic needs were not established until we had been there for several days, resulting in production time and volunteers lost, as well as many people becoming sick,” she wrote.

Dozens of people told us that things would have been even worse if people on the ground didn’t take the initiative, noting that DiMartino even refused to come to the campground for five hours while police blocked access to weary attendees until after 2am, an incident he minimized to us, calling it a miscommunication and insisting “I had a personal arrangement with the property owner.”

Giusti said she and other staffers are moving rapidly toward resolution of all the problems surrounding Synthesis, from refunds to attendees (many of whom paid $499 each for a “full experience pass”) to compensation for staff, both financial and spiritual.

“Michael does need to come forward and apologize to people,” Giusti told us, noting that she is planning a healing ritual to bring closure to this whole saga. “He will sit in the center of a circle and hear what everyone went through.”