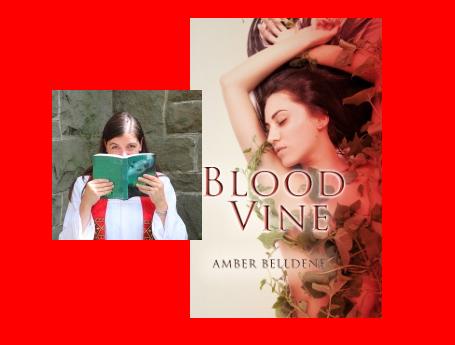 It is perhaps indicative of my professional scope that I was nervous to talk to Amber Belldene, Bay Area author of a “racy romance” vampire novel (her words.) But be advised, my anxiety was due less to her literary pursuits and more with the fact that she is an ordained Episcopalian priest. Religion, it would seem, is a harder passion to penetrate for me than undead sex scenes.

On her end, Belldene sees no conflict between the two. “Romance novels are really about love, and so is being Christian,” the neatly-attired writer, who “fell down a slippery vampire slope” when she was a young thing told me during her visit to my office. The tagline on her website reads “Mystically Sexy Paranormal Romance…because Desire is Divine.” [sic]

Blood Vine, Belldene’s debut novel, does present a few conflicts with the Christian faith, however. For one, the protagonist is undead. What would Jesus do?

Though she came to her calling via a mystical experience in her early teens, the priest is far from one of those religious types who seek ban Harry Potter as a tool of the devil. “For me, fiction is just fiction,” she explains. And when she was bedbound pregnant with her twins, she felt the renewal of the connection to vampire novels she had as a child — so much so that she began to devour blood-based books at rates of one to two a day. (For the record, she started with Discovery of Witches and has never read the Twilight series, although she is fond of True Blood.)

“It was a gut interest,” she says of this affinity for fanged folk. Vampire lit, she felt, “turns our hunger and longing for things into something visceral. [Vampires are] our exaggeration of our human traits.”

And longevity makes for some interesting plot lines. Belldene (her pen name — to protect those she works with, she also won’t reveal the place where she serves as priest) says she banged out Blood Vine rather quickly, and was able to get women-owned, indie publishing house Omnific to print the book on a per-order basis. The day of our interview she still didn’t have a copy of the thing, a fact that she shrugged off in a rather confusing, if charming manner.

She was inspired by some grapevines at a winery she visited in Sonoma County upon discovering that the vines had come from Croatia. The vines, as is obvious from the title, play a starring role in the book. “I think it sounds sillier than it reads,” the author half-apologies as she explains the plot. It is: hunky Andre Maras the vampire lives on a Sonoma vineyard. Far from his homeland, he is wasting away — a common vampire trait when separated from one’s birthplace, Belldene tells me. He hits upon grafting vines from his native country onto plants in California in the hopes of deriving ancestral pep from the wine made from the berries.

Since Andre wants the best for all his fellow vamps, he starts producing the wine on a mass scale. And since that of course entails a cohesive publicity campaign, he hires a PR firm — a PR firm who assigns a rep, Zoey Porter, to his account that he finds quite comely. The rest is neck bites. (Figure of speech, I haven’t read it and you know how these undead novels go, surely it’s not that simple.)

>>ANDRE THE VAMPIRE INTERVIEWS BELLDENE ABOUT BEING A SEXY STORY-WRITING MINISTER? IT’S TRUE!

The plot is far from X-rated, Belldene tells me, but “this is solidly romance. But on the spicy level, not sweet and sensual.”

What’s been the reaction from those who know her as a holy woman? Mainly positive, the priest of seven years says, and she counts among her supporters prominent members of the Bay Area Episcopalian scene, although many “appreciate the fact I have a pen name.” And for those who have been a bit more confused by the unholy Andre and crew, Belldene has practiced tolerance as any good Christian would. “I have been supportive of their questions,” she says.

Belldene has two sequels to the novel in the works,