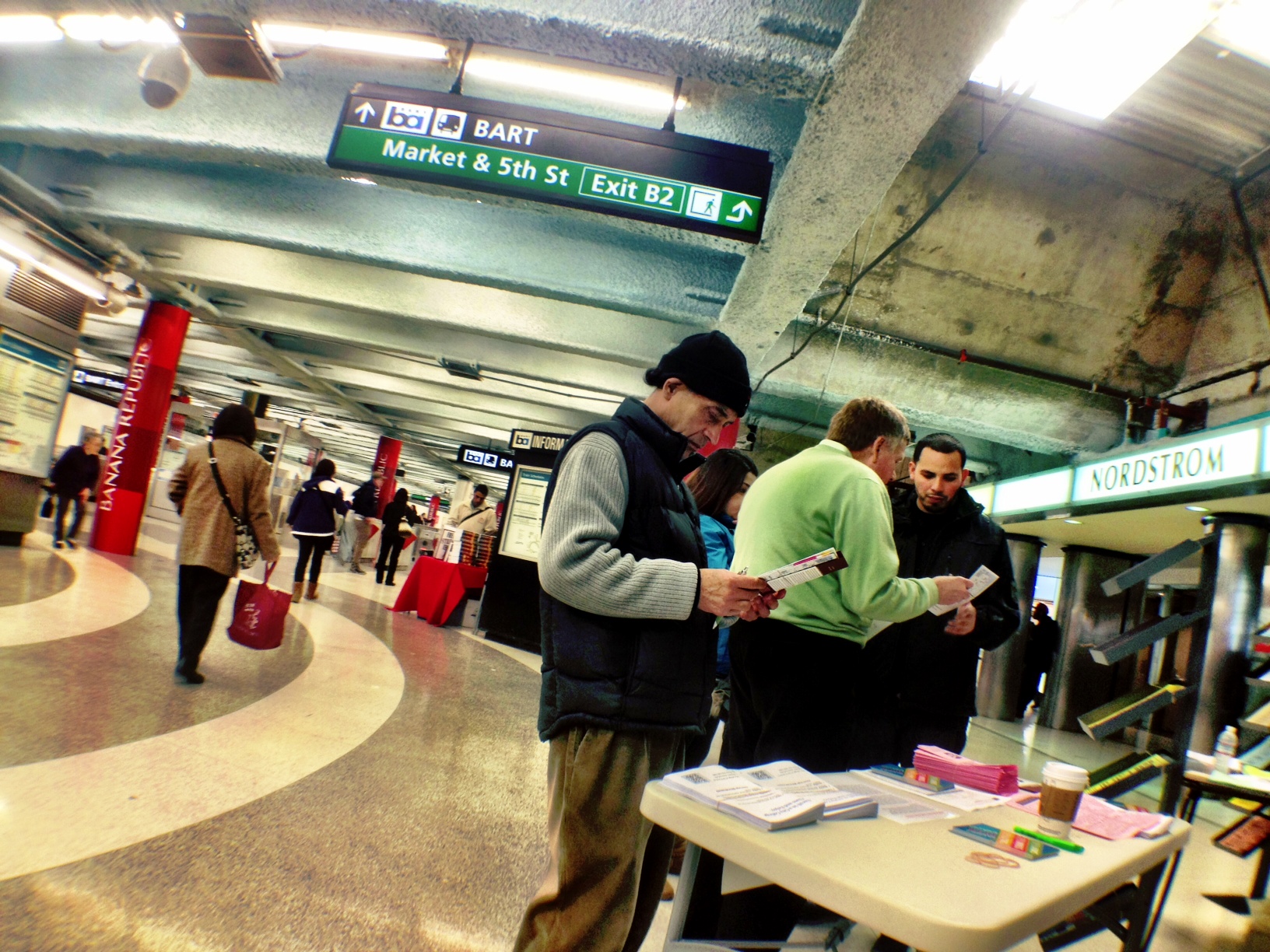 Walking through the Powell BART and Muni station, commuters are used to hearing the cries of a melange of musicians, crazies, and those with something to sell. Today and tomorrow though, commuters will hear something entirely different, as teachers cry “Enroll at City College! Enroll now!” through transit stations across San Francisco.

Teachers and faculty from the equally bedeviled and beloved school, City College of San Francisco, are out in force with flyers and laptops trying to shore up an enrollment deficit of 3,000 students. Today they’re at the Powell, Montgomery, and Embarcadero stations, handing out flyers and enrolling potential students on their laptops. Tomorrow, they’ll be at Civic Center, Mission, and Balboa street Muni and Bart stations doing the same.

The lack of student enrollment would deprive the school of $6.5 million dollars in state funding, which the school has responded to by cutting faculty and administrative salaries by 8.8 percent, and electing not to rehire, essentially letting go, 30-40 part time teachers, 18 part time counselors, and 30 clerical staff.

It’s no wonder these teachers are out on foot, enrolling as many folks as they can — and they say they’ve met with some success.

“I’ve been surprised how receptive people have been,” said Lizzie Brock, a basic skills English teacher at the college. Brock was on her feet handing out flyers for four hours, despite being about six months pregnant with her second child. “It’s a labor of love,” she said.

Though Brock only recently became a tenured teacher at the college, having taught there full-time for six years, she can’t afford to live in San Francisco on her salary from CCSF. She lives in Pacifica, commuting to the city to teach her classes.

Thomas Blair, a foreign language department head at CCSF who also teaches French, organized the two days of outreach. An older gentleman with snowy, neatly combed hair, and a kindly manner, he’s the last person you’d expect to sound the trumpets and gather 90 or so teachers to hit the pavement.

His passion for the college lies in these simple facts: he’s taught there for more than 30 years, and as a department head, he has a responsibility to all of the foreign language teachers at the college, and the thousands of students who open themselves to learning how to communicate with the world.

“I brought the table on the K with me all the way from Ocean Avenue,” Blair said. He thinks he has a pretty good chance of signing up new students from commuters, because those in the 30-55-year-old crowd are often the ones taking new languages at City College, he said. “The office workers are a very good segment for us now,” he said.

Guillermo Romero, a blueprint reading instructor at CCSF, was also there handing out flyers. Streams of people flew past Romero, but he was undeterred. Romero is confident that his classes will meet enrollment, simply because of his philosophy in teaching his class, he said.

“Disfrutando euseñando, disfrutando aprendieindo,” Romero said. If you enjoy teaching, they’ll enjoy learning — and hopefully be back for more.