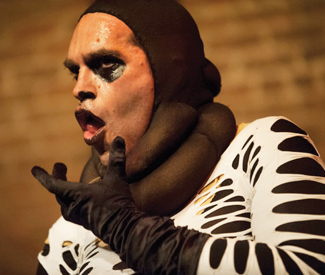 CAREERS AND ED Like most skills, acting can be honed and refined, and the number of disciplines and techniques an actor could familiarize themselves with are practically infinite. Fortunately for the professional and amateur actor alike, there’s a number of theater companies who offer the same actor trainings to the public that they utilize in the creation of their own work.

Ranging from techniques such as Suzuki Method or Viewpoints, skill sets such as improv or stage combat, or theatrical forms such as Bouffon or Kyogen, these classes help keep working actors in artistic shape, and offer a way for even rank beginners to acquire translatable performance skills. And since unlike acting schools or conservatories, there’s rarely an audition process or prerequisite for attendance, they’re accessible to a fairly broad demographic.

Ensemble theater-making is East Bay company Ragged Wing‘s focus, and therefore also the focus of the trainings it offers to the public. Utilizing techniques such as Viewpoints, mask performance, puppetry, music, and myth-based story creation, Ragged Wing introduces actors and theater-makers of all levels (including total newbies) to concepts such as devised theater, imagination play, and the psycho-physical exercises of Michael Chekhov. It even offers a workshop for teachers in applying ensemble theater techniques in the classroom. Visit its website for an overview of last year’s program, and this year’s upcoming dates, which will occur later this spring.

We like this next class so much we awarded it a Best of the Bay in 2011! Taught by Naked Empire Bouffon Company artistic director Nathaniel Justiniano, the Intro to Bouffon Workshop guides up to 20 participants on a journey to find their “personal bouffon” (or “inner psychopath,” as we termed it). Alternating between weekend intensives and four-week workshops of two-hour sessions (one of which just started on January 15), Intro to Bouffon includes instruction on creating within ecstatic play, movement-and-vocal-based improv, and blatantly violations of the usual boundaries drawn between audience and performer. In addition to teaching at the warehouse Main Street Theater, Justiniano has also recently joined the Circus Center faculty where he will teach a seven-week course on Bouffon beginning in April.

Another theater company offering training in the specialized theatrical format it also performs is Theatre of Yugen, which offers a series of art of performance workshops as well as an apprenticeship program on Kyogen and Noh techniques. This year’s public trainings begin on January 26 with a weekend intensive on “Physical Character” in the Kyogen style of performance. Private apprenticeships are granted by audition, and last for an entire calendar year during which apprentices train and eventually perform with the company, sometimes staying on as company members after their graduation.

$80–$100 (with discount for taking multiple classes.) Enrollment is limited. www.theatreofyugen.org

Sure you can act if someone hands you a script. But how about when there isn’t one? At its best, improvisational theater makes use of a whole range of techniques, and requires a huge amount of focus and cooperation between players in order for a scene to work. It’s also one of the most accessible theatrical art forms for beginners to get involved with, particularly in the Bay Area. One of the newer kids on the block, EndGames Improv is nonetheless one of the most pedigreed. Offering instruction in “long form improvisation” à la Upright Citizens Brigade and Second City, EndGames Improv holds classes in four levels and stages weekly performances at Stagewerx, including its infamous “F!#&ing Free Fridays.” Seven-week classes are capped at 16 participants. January is sold out, but keep an eye on the website for future dates.

They’re not a stand-alone theater company, but I can’t resist mentioning Dueling Arts San Francisco. Providing instruction to performing artists in a wide range of stage combat skills — including quarterstaff (what up Little John?), rapier, dagger, broadsword, and unarmed combat — the instructors of Dueling Arts are also accomplished fight directors and performers in their own right, for a diverse array of companies including IMPACT Theatre, Shotgun Players, Thrillpeddlers, ACT, Berkeley Rep, San Jose Rep, SF Playhouse, and California Shakespeare Theatre. Certification class sizes are generally between six to 12 students, and there are no prerequisites for the beginning levels.