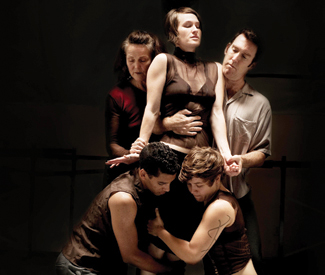 DANCE After a decade of dancing and choreographing in the Bay Area, Cid Pearlman departed for Los Angeles, spent a year in Estonia, and now lives in Santa Cruz.

At last May’s San Francisco International Arts Festival, she re-introduced herself with This is what we do in winter, choreographed in 2010 for both her own dancers and performers from Tallinn, Estonia’s capital. In that piece, dance as social activity beautifully co-existed with the art as rigorous practice. This is what made you wonder what else this choreographer might have percolating.

It turns out to be the premiere of the intriguingly named Your Body is Not a Shark, a collaboration between Pearlman, composer Joan Jeanrenaud, and poet Denise Leto. Maya Barsacq, music director of chamber orchestra Cadenza, instigated the project. The women came together with a common interest in exploring constraints — physical and otherwise — as a generative force in art making. “In dance,” Pearlman says, “the young athletic body is the norm. I want to explore physical differences because I am interested in complicated stories that show people at different stages in their lives.” Shark’s seven dancers range from 18 to 64.

As a no-longer-young dancer, the 49-year-old Pearlman knows about the fragility and vulnerability of the human body. But, as she pointed out in a New Year’s Day conversation from Santa Cruz, “there are different kinds of virtuosity. There is hugely physical, deeply embodied dancing in your 20s and 30s which relies on strength and sharpness technique. Older dancers bring maturity to their work. If they can’t jump so high, don’t ask them to. You ask a performer to do what they are good at.”

“Limitations can hit you any time,” she adds. “It’s part of the human condition.” Her collaborators know whereof she speaks. Poet Leto, who wrote the text for this production, likes to present her works orally. A few years ago, she developed dystonia, a neurological disorder that has affected her vocal chords. “Sometimes she can get the words out, sometimes she can’t,” Pearlman says. But like the dancer who finds new ways to use her body, Leto has developed new strategies for presenting her poetry. Among them is the presence of a co-reader, “so if her voice gives out, the other person picks up.” Jeanrenaud was a cellist with the Kronos Quartet who had to alter her musical career in 1999, when she was diagnosed with multiple sclerosis. She too adapted to the changed circumstances by becoming a solo performer and composer with wide-ranging works in many media.

Each of these three artists has faced the restrictions on their expressiveness by expanding their reach. (And as Pearlman points out, sharks die if they stop moving.) At the core of Shark are Leto’s poems, each written within the constraints of separate, highly formal parameters: a sestina, an oulipo, and a tanka. She then turned the verses over to Jeanrenaud, who generated a sound collage and an instrumental score to be performed by herself, percussionist William Winant, and members of the Cadenza chamber players. Leto too will be on stage.

Shark’s most demanding task by going farther afield may well have been Pearlman’s. Having immersed herself in the verses’ technical demands — some of them sound like algorithms — she shaped her choreography along the same rules. Leto seems to be happy with how her partners have worked with the poems. “Taken off the page — by the movement of bodies and the movement of sound — they have become something altogether different,” she says in the introduction to the texts’ printed version.

But what about the rest of us? With its intricately interweaving of formal questions and demands, will Shark be readable to an audience? “It’s not a problem,” Pearlman laughs. “They don’t have to know how it works. It’s an experiment. It’s meant to be a puzzle.” *

“YOUR BODY IS NOT A SHARK”