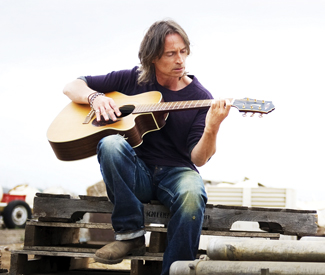 FILM Robert Carlyle is the kind of actor who usually elicits a slow-dawning response in realm of “Oh, right … that guy. What was he in again?” Well, a lot, but if you’re not British (let alone Scottish), his visibility has probably been erratic and infrequent — plus he does that exasperating English thing of taking TV assignments like they’re perfectly OK, as opposed to the US approach of doing series work only when your big-screen career is in the toilet.

His persona, to simplify a bit, is usually that of the aging boy-man sad sack whose self-deprecation and pleading eyes are attractive until you realize he’s as likely to slide out of any commitment with a muttered excuse as easily as he’ll slide off that bar stool. In other words, a long-odds but redeemable loser. In that vein his quintessential role was as the main guy trying not to disappointment everyone yet again in The Full Monty (1997), an unusually bleak and satisfying “feel good” movie that spawned umpteen softer ones. He’s played variants on that part enough times that you might forget just one year earlier he was the terrifyingly vivid psychotic Begbie in Trainspotting.

Indeed, he’s played a Bond villain (albeit in 1999’s The World Is Not Enough), a cannibal (in 1999’s Ravenous), an evil wizard (2006’s Eragon), even Hitler (in a little-seen 2003 TV film), and if you get BBC America you might well think he’s the most versatile actor on the planet. But the projects in which he most frequently surfaces here — discounting American broadcast money gigs like SGU Stargate Universe — are little UK art house dramas. Often directed by people such as Ken Loach or Shane McMeadows, they customarily find him as protagonists who’d have been Angry Young Men a generation or two earlier. But now they’re not even angry; defeat has been bred in since the cradle, and there’s likely to be a good deal of pathos in any attempts to buck the odds.

Bruised losers going down — albeit not without one last noble act or effort — can be a beautiful line for an actor to make his own, from Jean Gabin to Liam Neeson (before he abruptly turned geriatric action hero). If the shabby shoe fits, might as well wear it. So Carlyle is a producer on California Solo, the kind of movie that often prompts critics to evoke ones from an earlier era (1972’s Fat City, 1981’s Cutter’s Way, 1975’s Rafferty and the Gold Dust Twins, etc.) No one went to those, either. But they were good, small, “personal” films with a genuine fondness for gritty characters and milieus.

Writer-director Marshall Lewy’s drama revolves around Lachlan MacAldonich, a lanky fortysomething Scotsman who’s somehow found himself managing an organic farm for its cranky but loyal owner (A Martinez) in that deep SoCal nowhere rendered agricultural only by the contortions of water-rights trafficking politicians.

He lives alone, he drinks alone; whatever past he’s got is one he’s cut himself off from. He does have an interesting “hobby” that might provide a clue: boozily hosting a weekly podcast from his kitchen table called Flameouts, “the show where we discuss the tragic and sometimes spectacular deaths of the world’s greatest musicians.” If anybody actually listens, we aren’t told, and he probably doesn’t care.

But Lachlan’s genial not caring much about anything, it seems, when he’s stopped careening home down the highway after bar-time. The resulting DUI charge, even its four-month drivers’ license suspension, wouldn’t be such a big deal if it didn’t turn out that a long-prior pot conviction makes him eligible for deportation despite his green card. And Lachlan really, really does not want to go back to the UK He’s buried himself here precisely to avoid the massive fuckup that no one there would be likely to have forgotten — that he was once the guitarist in “Britain’s biggest band” (at least for one NME minute), and that the major casualty of his stupid rock-star antics was the “British Kurt Cobain,” his brother Jed. When he crawls to the Beverly Hills manse of erstwhile music biz associate Wendell (Michael Des Barres, disturbingly well cast as an oily industry survivor) to beg for immigration lawyer money, the latter snaps “I was never your manager. I was never your friend. Jed was the band.”

Cue further self-destructive impulses, not at all eased by the pleading cow eyes Lachlan makes at sympathetic Beau (Alexia Rasmussen), a much younger customer he chats up at the farmer’s market each Sunday. (It’s even more embarrassing when Danny Masterson as her age-appropriate DJ boyfriend realizes “who he is,” and pours on the hero worship.) Even more painful are Lachlan’s attempts to re-establish some relationship with the bitter mother (Kathleen Wilhoite) of his now-teenaged daughter (Savannah Lathern) so he can claim his deportation would be a hardship to them.

Those last sequences are truly squirm-inducing, because the gap between Lachlan’s desire to do something right for a change and his haplessness at actually doing it is so palpable — we know it’s unfair he’s looking like a “reet eedyut,” but we also know he’s entirely brought it on himself. This is where an actor like Caryle knows how to go for the throat without seeming to reach for effect at all. He makes the depth of Lachlan’s self-loathing so palpable you want to hug him. After you’ve slapped him … but still.

Lewy also wrote and directed the very astute indie drama Blue State (2007), and if he didn’t craft Solo specifically for its Carlyle’s floppy-haired, ever-apologetic charm — well, didn’t he? This is the kind of very good movie that surprises when it actually turns up in theaters, however few. No matter that whoever actually sees the undeniably depressing-sounding California Solo will likely find it — and its star — endearing, poignant, ultimately upbeat. It’s even sort of a perfect early-date movie, softening up the emotions with male fragility redeemable by female generosity and forgiveness.