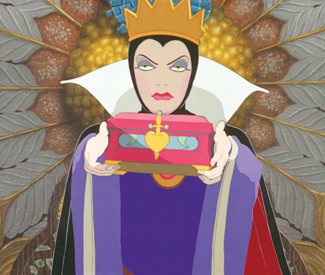 FILM One of the few upbeat by-products of the increasing infantilization of popular movies is that the same impulse to dumb down live action for permanently adolescent tastes also raises the bar for animation, which no longer has to target grade schoolers as its primary audience. Even not-so-special 2012 had more sophisticated and interesting animated features than you’d find in any given year a couple decades or more ago. Wreck-It Ralph won’t win the Best Picture Oscar. But it will almost certainly be better than whatever movie does.

The notion that adults actually want to see full-length cartoons, however, seemed preposterous to myriad soon-to-be-crow-eating people 75 years ago. That was when Walt Disney unleashed Snow White and the Seven Dwarfs on the public — to an enormous success no one had predicted. In fact, all bets were placed on “Disney’s folly” sinking the studio that had foolishly invested all its resources (and a lot of borrowed money) in a venture whose cost overruns and dim prospects had been the talk of Hollywood. (No doubt a few studio heads were happily anticipating hiring Walt’s newly at-liberty talent at cut rates for their own animation divisions.)

Of course, the naysayers were proven wrong — opening up the floodgates to more cartoon features, then Disney live-action films, nature documentaries, TV series, theme parks … a whole empire of “brand” that for better and worse has shaped American culture (and its perception abroad) ever since. The double-disc 2009 DVD release of Snow White features, among its extras, one latter-day observer calling the film “one of the great American success stories of all time.” (The official Disney history offered up in such self promotional products is relentlessly hyperbolic. The same package also offers an “all-new music video” rendition of “Someday My Prince Will Come” by one Tiffany Thornton that is so horrifyingly kitsch you can be sure it will be erased from the official Disney history forthwith.) Snow White would set a record for being the highest-grossing film of all time — but not for long, since a little thing called Gone with the Wind came out in 1939 and stole that title for another quarter-century.

I doubt Mr. Disney could have imagined the world in which his Snow White — which plays the Castro in a newly restored digital print this week, by the way — would be celebrating that septuagenarian anniversary. One in which prevailing tastes decreed two big-budget live-action spins on that same Bavarian fairy tale would be among 2012’s major releases for grown-ups; a mass murder of his target demographic would dominate year-end news; and the unions he famously opposed would be popularly vilified.

That ripple effect is more than this movie should have to bear — let alone that it was apparently Hitler’s favorite. Because Snow White is still a charmer, gorgeous in the depth and detail of its backgrounds, seamless in traversing the bridge between score and song, and timelessly adorable (to use the heroine’s favorite adjective).

It seems less dated than just about any other movie from 1937, even if Snow White herself remains an insipid blank with the voice of Betty Boop doing operetta. (Subsequent Disney cartoon heroines would be feistier, though heroes would remain problematic — Walt’s animators found Snow’s Prince Charming so difficult to depict they wound up simply cutting his screen time to the bone.) The most one can say for her is that she seems to have majored in Home Ec, though the evil queen hooked on being “fairest of them all” kick-started a fine legacy of excellent Disney villains. (Notably absent were such grisly original fairy-tale details as the step mum’s death from dancing in red-hot iron shoes at Snow’s wedding.)

You can blame Snow White for cementing Disney’s transition from the rambunctious to the harmless. But 75 years later that formula still works — in this instance, at least. The art itself remains near-timeless, even if the subsequent Pinocchio (1940) and Bambi (1942) are arguably much better films. Few movies had anywhere near the same impact, on the medium’s development or life in general.

It had a more direct impact on the Radio City Music Hall, whose seats had to be replaced after a record-breaking run because children kept wetting themselves during the scarier sequences. Adorable!

SNOW WHITE AND THE SEVEN DWARFS