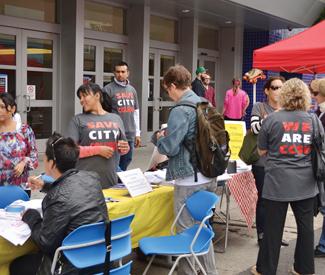 Despite recent voter approval of Proposition A, the parcel tax expected to bring $14 million annually to City College of San Francisco, faculty there are enduring pay cuts and layoffs, a reality that has rankled union leaders and others who have rallied to save the school.

In the face of the school’s accreditation crisis, which if not addressed by March could lead to its closure, the college was a united front to keep the school open and pass Prop. A, which was approved by over 70 percent of San Francisco voters on the same night as President Obama’s reelection.

But a combination of timing (the money won’t roll in until later in 2013), the depth of the district’s fiscal hole, and declining student enrollment have left CCSF with essentially status quo funding. District officials appear to be leaning toward using most of the surplus it does get to beef up its scant reserve funds, which was one of the things that triggered the accreditation crisis.

After the good news of Prop. A’s passage, CCSF discovered it wasn’t on track to meet its required enrollment numbers — and the number of students enrolled dictates state funding.

“[The administration] was focused on these accreditation reports. It’s a big job. It was very disruptive to change chancellors kind of midstream,” said John Rizzo, the college’s board president. “We had to switch administrations, and that’s been very difficult.”

City College has been through three different chancellors in the past year: longtime Chancellor Don Q. Griffin left in April due to illness, Pamila Fisher was interim chancellor until October, and now Thelma Scott-Skillman is the current chancellor.

Whatever the reason, City College has 3,000 fewer students enrolled than it expected to have for the Spring, potentially putting it $6.5 million in the hole this coming year. It has until the end of summer to boost those numbers. Now, despite all the cards coming up aces for them in the polls, the college still needs to save millions of dollars somewhere else in the budget.

It has started by slashing faculty and administration wages 8.8 percent, and not renewing contracts for more than 30 part time teachers, 18 part time counselors, and 30 clerical staff. Notably, Scott-Skillman — whose office negotiated the plan, which the board discussed on Dec. 13 — will also take a paycut.

Alisa Messer, president of the faculty union at City College, thinks cutting teachers, and therefore classes, flies in the face of what the voters bargained for with Prop. A. “There’s no discussion here about accountability to San Francisco voters,” Messer told us. And with the loss of competitive wages, the faculty has already started to come apart at the seams.

“We have unfortunately heard from quite a few faculty that they will be looking for jobs out of state,” Messer said. “Many said they’ll have to change their living situation or move out of San Francisco.”

She said that would hurt CCSF: “These things have to do with the long term viability of the college.”

Steve Ngo, a trustee on the college’s board, thinks that the Prop. A money should be used to shore up the school’s reserve fund, as dictated by the accreditation team that threatens the school with closure. Unfortunately, this means losing teachers now rather than later.

“If you want to frame it in terms of labor, there’s nothing worse to do than spending money now [to retain teachers] and laying off teachers in the future,” Ngo said. “Those are younger teachers. The people there now will be retired.”

Due to increased focus on diversity in hiring, CCSF’s more diverse and younger teachers tend to be the newer ones, and part time faculty, Ngo said. Those are the teachers most at risk — and the ones that students will end up losing.

Amidst the arguments about proper use of funding, teachers at the school are seeing their wages cut. Some, like Danny Halford, are losing their jobs.

Halford taught English as a Second Language at City College for seven years. A friendly and outgoing middle-aged guy, Halford is a veritable man about town, and can be seen at City College fundraisers, and was among the college’s most ardent Prop. A supporters, waving picket signs and attending rallies.

He was also one of the part time faculty members to lose his job in the Spring.

“Greg Keech, our super-wonderful ESL Dept. chair, wrote me a very nice letter to inform me that due to budget cuts there will be no job for me next semester,” Halford said. He had also recently lost his job as an organist at the College Avenue Presbyterian Church, which he’d had for 10 years, when a new pastor had “a new music concept that I don’t fit,” he said.

One of his favorite memories from City College was of a student named Elmer, from Guatemala. “He came into my Literacy class in May 2006, near the end of my first semester, with almost no English.  He made progress quickly.”

“When he got his G.E.D. diploma, I was so proud of him, I could have bust,” Halford said. “I’ve watched him grow, off and on, for six years now. He has no family here, and I think of him as my nephew.”

He may even be re-hired next fall, but until then he waits in limbo. He’ll try to substitute teach at the college for now, he said, but ruled out looking at other schools for work. As he said, “There are no jobs at other colleges because all colleges are in the same boat.”

Ngo said that the choice is basically between drastic change, or the closure of the school.

“It’s mathematically impossible to keep that payrate now,” Ngo said. “My hope is to provide the best wages and benefits in the long run, but we can’t offer it if it’s a facade. We can’t maintain payrates as they are now because we have too many faculty…There’s no agreement if there’s no college.”

City College’s faculty’s union, American Federation of Teachers 2121, filed an unfair labor practice charge Dec. 21 with the Public Employee Relations Board, a state entity that has the power to enforce labor law in California. The charge alleges that the college’s paycuts are unlawful.

A recent email to their union members outlines the AFT 2121’s grievances with the college: “At Monday’s bargaining session, the District finally outlined its claim that it will cut wages to recover last year’s ongoing state cuts of $13 million—even though the parties bargained in good faith, reaching agreement on June 20, 2012 to address these losses, including the 2.85% wage reduction this year and millions of dollars in savings through attrition and program cuts. The District is essentially overriding the previous agreement by now moving to cut wages to recover $13 million on top of the already agreed to concessions.”

College spokesperson Larry Kamer said he hadn’t seen the charges yet, as the college is on vacation, but that “we respectfully disagree with AFT 2121’s characterization of the situation.”

“City College is facing an immediate budget shortfall due to a second straight year of missed enrollment targets,” he said. “In the past, City College might have papered over such a budget gap with money it didn’t have, but those days are over. The college remains in a perilous situation with regard to accreditation and has no choice but to respond to the crisis with swift action and a request for shared sacrifice.”

And there’s the rub. In the midst of reforming the school to meet the requirements of the accreditation team by March or face closure, the college failed to keep its eye on their enrollment.

“The unions were trying to help, calling prospective students and trying a pitch,” Rizzo said. “‘Hey enroll!’ That kind of thing. They’re helping. A lot of people are trying to chip in to help this.”

“Ultimately it’s the people in the administration who are responsible for the enrollment,” he said.

With City College’s newest Chancellor Scott-Skillman on track to stay for at least a year, some stability may return to college’s administration. But City College’s dilemma, to potentially strain its budget to the breaking point or to lose valued and experienced teachers, has no easy answers  — and either way the losers may end up being the students.

To register for classes at City College, visit ccsf.edu. Enrollment for Spring is open.

CCSF by the numbers: