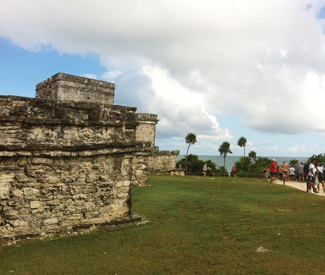 TULUM, MEXICO — Sometimes you need to just listen to the universe and the many ways she conspires to set your path. That seems particularly true while visiting the Yucatan to cover the end of the Mayan calendar, the galactic alignment, and the winter solstice. Things at the grand festival that was supposed to be happening did not go according to plan — to say the least.

I was supposed to be Chichen Itza, attending the Synthesis 2012 Festival and perhaps the Ascendance party. But several factors lined up to keep us in Tulum, miles away from the Mayan pyramid where the much-awaited festivities were to take place.

For one thing, there was my sweetie’s bout with bad ceviche. But there was also the general disorganization of an event that was supposed to bring thousands of people, many of them Americans, to a part of the world not exactly set up for mass tourism.

The shuttle service from Tulum to the festival essentially fell apart. Our hotel room at the festival also disappeared, along with rooms offered to performers at the festival by organizers who overbooked and overpromised, apparently too optimistic in this moment’s power to provide.

They also seemed to have a little too much confidence in the welcome they would receive from locals: The sound system delivery crew was turned away and threatened with violence. The show eventually went on after organizers found a sound system provided by a local vendor — but the scene was chaotic.

I tried to get more information about the sound system truck, but the festival organizers ignored my request for a copy of the email describing the incident that was sent to performers. Musician Jeff Scroggins told me he’d been informed that the truck was pulled over by locals, who told the crew to go away and said they’d be shot if they returned.

My press contact minimized the incident, which left the festival without amplified sound for its first day. But the incident does seem to get at an inherent tension between local life in a small Mexican town and the hopes and ambitions of outsiders who came to layer a big festival onto this sacred moment.

Festival organizers seemed pretty overwhelmed by the fact that, as one musician taking a break from the madness told us, “everything that could go wrong did go wrong.” Or as media spokesperson Candice Holdorf told me, “It’s kind of like radical self-reliance,” borrowing a phrase from Burning Man.

On the other hand, the Mayans that I’ve talked to about the end of their Long Count calendar on this trip, like my cab driver yesterday in Tulum and someone we met a few days ago in Playa del Carmen, mostly just shrug when I ask about 12/21.

Perhaps we’re all projecting lots of our first-world hopes and desires onto this occasion. When I interviewed Peter Mancina — a cultural anthropologist who studies Maya culture (and who works as a board aide to Sup. David Campos) — he emphasized to the modern Mayan people are still plentiful and have diverse viewpoints on the world. Similarly, author John Major Jenkins told me that he didn’t want to see the Mayan people and their needs get lost in this moment.

It’s been amazing to watch the rapid transformations of space taking place all around us as this once-pristine beachfront develops ever-more amenities for the visiting tourists.

The Yogashala hotel across the road from our Pico Beach cabanas had a new roadside room and sign added over the last two days. Next door, an Italian couple opened a roadside juice bar two weeks ago. On the other side of that, Jaguar Restaurante was staffed mostly by people who have been here for weeks, months tops. And as I write these words, a new beach is being rapidly built right before my eyes.

But tourism is still tourism, and there is certainly a reverence and respect for the Mayan culture being expressed by all the festival goers that I’ve talked to, even if this may be one in a series of culture moments that are part of this age of transformation and the creation of values that are different than the ones we’ve inherited from older generations.

As astrologer Rob Breszny told me, people are emotional beings, and there’s something about transformation festivals that mark a moment and allow us to build on it, from the days of Woodstock through the annual exercise in community building that is Burning Man. And with this log thrown onto the fire, perhaps those interested in transformation will burn a little brighter.

Tulum is still pretty close to paradise, with its white sands beaches, warm clean seas, chill happy people, and wonderful off-the-grid abundance. Here, it’s easy to commune with the natural world, which seems to be what this day calls for. Whether its the symbols in the sky created by the outlines of unfamiliar birds, or the dots of bioluminous organism on the beach as we celebrated the arrival of Dec. 21, they all seem portentous of something better.