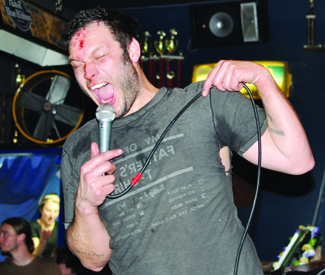 YEAR IN MUSIC Imagine a frustrated ghost floating above his own funeral. He might hear someone getting the eulogy wrong or even see an unwanted guest. One of the benefits of having your band come to an end rather than your own demise is living to react to retrospectives of your creative output and impact. But as I write this, Uzi Rash isn’t quite dead yet. In fact, it has one last breath of doing what it does best — live performance.

It was the type of weather where you only sometimes need a coat and had been raining on and off. Wearing too many layers, I found the address where the band said it’d be practicing. The garage was wide open and I got a friendly wave to come in.

The group’s final incarnation, featuring founding band leader Max Nordile, Steve Oriolo (Steve0) on bass, and new drummer, Erin Allen, was preparing for a new recording and its first national tour. Aptly titled “End Days — Last Tour” it would be its last altogether. (This was solidified when I was handed a swag pair of generic party-dude shades wrapped in cellophane. I opened them and found Uzi Rash 2007-2012 boldly written in black on white on one of the temples.)

A live sneak-preview performance of the cassette, The Garbageman’s Uniform (Minor Bird Records) was preceded by stage-ready versions of more familiar sounding songs. We talked baseball a bit during a beer run, even though the postseason hadn’t yet begun. The A’s were still doing well and that’s where we were — on MLK in Oakland.

“You truly are a noise-ician. Keep it stupid, stupid,” Nordile, clad in a Grass Widow t-shirt, quipped to his drummer on a particularly up-tempo number. Earlier, he complimented the newest member’s ability to learn over 20 songs in about a month and a half’s time. Allen smiled at some of the mistakes that were made and the three wondered if they needed to dumb it down even more.

They ran through another song twice because Nordile said it went too fast. His bassist conceded with the line, “You’re the maestro.” To which he lightheartedly replied, “The maestro has decomposed.” After a few chuckles practice ended somewhat abruptly when Nordile’s guitar string broke.

Despite any corrections or control, it didn’t seem like perfection in a refurbished sense is what he was going for. I don’t think they were hamming it up for me when they foraged from bins of discarded food, which included some less-than-fresh looking bagels outside a church down the block. Nordile would later articulate part of his concept as a stance against the desacralization of nature.

“Waste, detritus, trash and garbage are documents, like fossils of the wasteful and destructive aspects of civilization,” he said. It’s that very affinity for what some consider undesirable that has fueled themes, inspired songs, and had allowed for five years of non-stop live shows that thrived on chaos and confusion (sometimes there was blood).

The industrial-strength cacophony is apparent when you listen to the final product of Uzi Rash recordings. What started as a solo project out of Nordile’s desire to not have to depend on anyone became a virtual who’s-who of East Bay-band inbreeding some 30-plus members later. Ultimately, Nordile would be calling the shots, but he’d rely on his like-minded community of supporting players and embrace their complimentary abilities by having them around. Something he considered a huge improvement.

By the time you read this, their last performance will have come and gone and Nordile will have screamed along to “I’m a Trashbag” with the deepest conviction. Oakland has long served as a gritty breeding ground for so many acts that never got their fair due or enough recognition, but with Uzi Rash, we recognize their ability to put Dylan in self-deprecating drag, to recycle a riff, rip a melody (sometimes a whole song title straight up), but to put their own “beach squelch shimmy” spin on it and make it exciting.

“Rock’n’roll has been mostly boring white boys with guitars. I am too, but I realize it and strive to acknowledge it and move on.” With that we take the boogie or, booji, as he’d say in stride and wait while Nordile casually contemplates his next music project because five years is up.