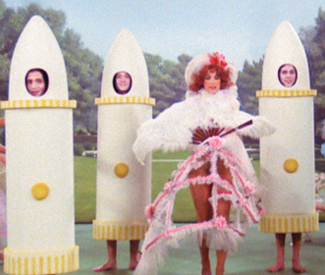 TRASH It has been noted that most people didn’t experience “the Sixties” until the Seventies, at least in terms of all that Free Love and chemical entertainment. But even at the latter decade’s most indulgent junctures, many people’s minds remained stuck in the Fifties — sniggering about the very idea of sex, using terms like “boobies,” insisting women be gorgeous idiots and men perma-adolescent clods.

The 1970s may have begun with 1971’s Carnal Knowledge — a bitter goodbye to the fucked-up-edness of pre-Sexual Revolution life — but the ’80s began with 1982’s Porky’s, which signaled a return to sex as dirty joke when it wasn’t harrowing in a vagina-dentata way (see: 1987’s Fatal Attraction). The apex and nadir of anything-goes Me Decade public sexual expression was the existence of Al Goldstein’s zine Screw, which pushed the frontiers of the new permissiveness while indulging infantile humor and fearful-hostile misogyny.

Where today’s trend toward “darker” versions of fairy tales on the big and small screen — Grimm, all those Snow Whites, the upcoming Hansel and Gretel Witch Hunters — perhaps indicates how childish adult tastes have grown, in the Seventies those fables were used and abused to measure just how far from innocence we’d come. As early as 1963, no less than Herschell Gordon Lewis was presiding over “nudie-cutie” Goldilocks and the Three Bares, after which followed The Long Swift Sword of Siegfried (1971), the same year’s The Erotic Adventures of Pinocchio (“It’s Not His Nose That Grows!”), and so forth. But the zenith, such as it is, of this trend was YBCA series kickoff Alice in Wonderland: An X-Rated Musical Fantasy (1976), whose opening credits feature the unique attribution “Underwater Nude Volleyball sequences shot by …”

In director Bud Townsend and scenarist-composer Bucky Searles’ very free adaptation of Lewis Carroll, Alice (Playboy centerfold and future Jackie Chan co-star Kristine DeBell, making her film debut) is a repressed librarian led down a rabbit hole of sexual exploration and liberation. Before returning to the real world (and real delivery-guy cock), she’s given a tongue bath by creatures whose costumes anticipate furry fandom; enjoys good vibrations from a talking rock; fellates the Mad Hatter; and watches unisex couple Tweedledee and Tweedledum 69 each other (what else are they going to do?) One doesn’t remember stripping lesbian nurses in the original, or topless slo-mo horseback riding. The women dance like Vegas showgirls and the men seem kinda queeny; don’t even ask about the “songs.” Nonetheless this cheap cheesefest was picked up for release by 20th Century Fox, which cut it to an R and made a small mint.

Evidently Damiano’s backers didn’t appreciate the joke, since the film was released at just 40-odd minutes’ length, with most of its songs cut. But Shepard promises an ultra-rare screening of the full, intended hour-and-a quarter edit. Swallow at your own risk. *