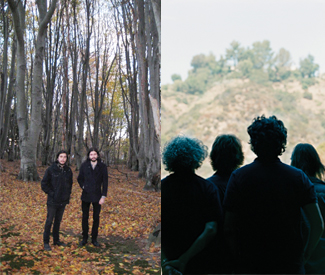 Tofu and Whiskey Arbiter of good taste, Thrill Jockey Records is officially 20 years old. In another era, in another business, this would merely be a back-slapping milestone. In the present stuck-barreling-downwards roller coaster of the music industry, it’s an anniversary worthy of widespread jubilation.

“It’s a mind-boggling number of years,” label founder Bettina Richards says during a phone call from the main office in Chicago, where the label’s been based since 1995.

And how else would a record label celebrates its birthday than with a series of familial concerts? There have been shows booked in key Thrill Jockey cities such as New York (where it began in ’92), London, San Francisco, LA, Chicago. Those shows (some of which have already gone down) boast lineups packed with label notables Tortoise, the Sea and Cake, Trans Am, Liturgy, Future Islands, and Matmos.

SF is considered a key Thrill Jockey city for a handful of reasons; there’s the aforementioned connection with Wooden Shjips and Barn Owl, plus, one of the label’s earliest releases was a band from here called A Minor Forest. And there’s another super-secret new signing set for 2013 (sorry, you won’t learn more than that here). “We’ve had a long, fond affection for the way San Franciscans can create super individual sounds,” Richards says.

Though they create different styles of music, Wooden Shjips and Barn Owl had some similarities that stood out to Richards when she was in the process of signing each. “They both share this transportive quality…taking you to an entirely different realm. With the Wooden Shjips, it’s an active feeling of motion, and with Barn Owl, it’s really an escape. It’s hard to put into words, but they both do something compelling to me.”

It’s that compulsion that’s lead Richards to many of her choices for the roster. She tells this story about one one the label’s most beloved acts: “Trans Am, way back in 1993, were the B-side of a seven-inch that John McEntire from Tortoise had recorded, and he gave me the seven-inch. It just happened that a week later they were playing. I saw them and was like, ‘oh my god, I love them.'”

While most of the acts have been found through musician friends and pals of the label, there’s the occasional random encounter, like Sidi Toure, the gifted Malian singer-songwriter. His CD arrived via snail-mail to the Chicago office right before Christmas last year. “We don’t usually get packages from Mali. I was on a drive to go see my folks, popped it in, and I just couldn’t believe it.” I tell Richards I had the same initial reaction to Toure’s mesmerizing compositions. “And the weirder thing,” she adds, “was that he sent it because he’s a really big Radian fan, which is a band from Austria with like, atonal drums. You just wouldn’t have guessed that, right?”

Austrian prog band HP Zinker was the first band she ever signed — at the time (’92), she was living New York City and was still bartending and working at a record shop. In fact, she did that for the first eight years of the label. The band lived in a decaying squat where White Zombie used to reside, and they all ended up moving in to Richards’ studio apartment. Richards lets out a raucous laugh recalling those early days.

From signing HP Zinker, to the label’s 330th release planned for next year, Thrill Jockey has maintained a comparatively sparkling reputation as a label that treats its artists well.

I asked Wooden Shjips drummer Omar Ahsanuddin why the label is so beloved and he replied: “Because they know their shit, are music fans, and mostly because [Richards] is a straight-shooter. As Phil Manley once told me: if you like getting paid on time, you’ll like Thrill Jockey.”

Barn Owl’s Jon Porras said, “It’s great to work with a label that trusts an artistic vision…Thrill Jockey upholds a level of professionalism and is open to unconventional ideas.”

“I think one of the main things, at least to me, is that these bands would be doing what they’re doing whether anybody is paying attention or not,” says Richards. “This is something they’re compelled to do. And in the same sense, we’re compelled to put it out, whether it makes sense or not.”

And that’s important in this current musical climate, a time when the mainstream labels are floundering, record sales have plummeted, and free music is a click away. “Trying to combat it would be like trying to swim against the tide. You’d exhaust yourself and get nowhere. Instead, we just try to adapt,” Richards says. “We’re small, so we’re flexible and can adapt quickly. The people that work here are super music geeks, that keeps them really involved.”

One shift has been the number of releases it puts out. It jumped a few years back from 10 releases a year, to three or four a month, including small print, specific collector releases, which appeal to the super music geek market.

In a nostalgic mood, given the anniversary shows, I ask Richards to look back and pick out what she’d want her legacy to be, after this thrill ride is over: “I hope people are as attached to some of the bands and the records that I am. I hope to, as an octogenarian, sit in my house and blast a Barn Owl record and really feel the same feeling I felt the first time I heard it. And I hope it’s as treasured to them as it is to us.”

In these stressful last days of the year, we likely all need a modicum of relaxation, just a taste. Local reed flute master Eliyahu Sills, best known as part of the the Qadim Ensemble, has just released an acoustic solo tribute to the sacred music of Sufism; a haunting record meant to assist in meditation, yoga, and just some overall relaxation techniques. Song of the Reeds is 10 songs of original improvisations, created on a flute made from a reed; can’t get more organic than that. www.qadimmusic.com.

That Vivian Girls-Woods collaboration just keeps getting cuter. It’s fascinating how it really feels split between the two out-fronts: Cassie Ramone and Kevin Morby, one part jingly lo-fi girl-group, one part folky, acoustic forest-dweller. With all the fuzz and tender melodies on half of the songs, it gets inevitable comparisons to Best Coast, but that’s only a shade of its output. Check the new karaoke-filled, warped VHS-style video for “Baby,” off Our House on the Hill, released this month on Woodsist, then go back and try alternating tracks such as “On My Time” or “Get Lost.” It makes for an engrossing, push me/pull you dynamic that will translate nicely to the stage. Plus, the Brooklyn band plays with our own headlining post-punk heroes, Grass Widow.

Another Brooklyn export: infectious 11-piece Afrobeat band Antibalas is coming our way, with its first full-length album in five years — a self-titled LP released in August on Daptone Records — horns blazing. The long-running act has been making a big, boisterous noise since the late ’90s, and closely followed in Fela Kuti’s steps, yet has suffered in relative obscurity until recently. Earlier this year, the New York Times asserted its belief that a post-Fela! world (i.e. the rise of crossover acts like Vampire Weekend, and the wildly popular run of Fela! on Broadway), might finally “catch up” and catch on to the skill of Antibalas. With Afrolicious DJs Pleasuremaker and Senor Oz.