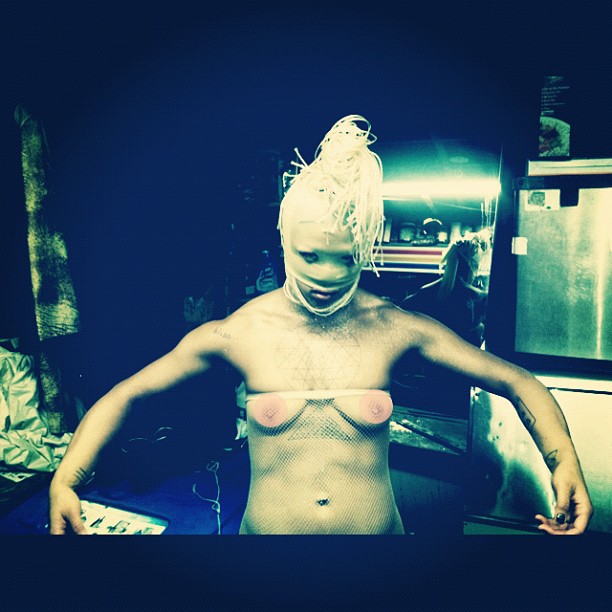 Awkwardly, riskily the figure rises almost to the rafters, its back still to us, spreads its legs, and begins to pull a tangled string of multicolored Christmas lights from her crotch. It performs this deliberately, turning the Rickshaw stage into a pressure cooker of strobe lights, sexual horror, and incipient danger — a strip club where no one can hear you scream. The atmosphere is so tense that when the figure finally turns around to reveal her eyeless, bloody-mouthed, death-pale self, as Ocean’s voice tweaks a level higher, shivers and gasps run right through the audience. Shiva the Great Destroyer, her tits bound with duct tape, a makeshift pouch at her crotch the source of her glittering lights.

It’s an out-of-body look that works. And it’s emblematic of a new glitchy-nightmare drag style (or the reboot of one) that’s bewitching clubgoers.

The performer was the amazing Dia Dear, one of a number of recent young arrivals who’ve zapped nightlife to another level by unselfconsciously — and quite organically — raiding the shelves of performance art, horror films, contemporary R&B, club kid history, and the Walgreen’s down the street to create striking personae for themselves, and electrify the city’s drag stages. They’re also so freaking smart it scares me, no Christmas crotch lights required.

Drag as confrontational, sometimes blood-spilling performance art has a long history here, of course, from the Cockettes in the 1970s, through the Popstitute and Club Uranus scenes in the early ’90s, through Trannyshack into the ’00s. It’s currently found a home at the Some Thing party every Friday at the Stud, High Fantasy every Tuesday at Aunt Charlie’s, and the Dark Room monthly party at Hot Spot. Iconic, sensibility-scrambling club kid styles like those of Michael Alig, Desi Monster, James St. James, our own Phatima Rude and Ggreg Taylor, and the ultimate drag inverter-perverter Leigh Bowery are all the rage in this retro-minded, post-Gaga moment. But something about this fresh wave, something about how it’s coming from people with no nightlife background at all, is different. Drag stages have become the affordable breeding ground for committed performance artists, expressing essential truths about our moment. Mere lipsyncing is so last century.

“I never even knew who Leigh Bowery was until people started mentioning his name this summer,” boychild, another of this new tribe, told me over the phone. (I live next door to boychild, and it’s not rare to find a neon-yellow spray-painted birdcage, a chandelier made of wigs, or an entire store display case sitting outside, waiting to become part of a perspective-shattering outfit or brandished onstage in a cyber-Wiccan, dystopian android ritual.) Like Dia, boychild just started going out to clubs very recently — pretty much arriving out of nowhere, both of them declining to share their pasts — and when she did she was almost fully formed as a stage presence, with a genius sense of makeup and a cerebral agenda.

“Everything I do is a reaction to being categorized: as a person of color, as a female-bodied queer,” she said. “It’s really bad right now, because it’s so hip to be black, “urban culture” is being fetishized to an enormous extent. I feel I encounter so much that makes me angry just existing in this world as a queer creature. My performance and look ties everything to my experience through my body. That’s where I express myself most fluidly, more acutely and vividly than through language.”

“Horror is where I’m coming from and where I exist,” Vain Hein, another performer, told me. Unlike Boy Child and Dia Dear, Vain Hein is open about his past: raised as a Born Again Christian in both Puget Sound and Phoenix, Arizona — “My childhood consisted of traveling between extremes” — he eventually found his way to the San Francisco Art Institute to study New Genres (this is actually a program there!) Vain Hein, who also performs to music he chops and screws at home, most explicitly ties sex to horror in his work — it’s chockful of surprise lactations, menstrual blood, live births, prosthetic triple breasts, and weird asses.

“I think a lot about the apocalypse, it’s how I filter and understand the world. Decay, destruction — everything I wear is just what’s at hand around my house, held together with scotch tape and nail glue, the shitty, shitty, shittest things ever that just fall apart during the night, even when I’m not performing. I literally shed my skin.”

Yet even as a queer art student in San Francisco, liberated from fundamentalism, he never went out until last year. “I just had preconceived notions about what going to a gay club involved. Then my friend dragged me to a drag show in the spring, and I was like, ‘I can do this.’ I had studied mostly performance art and video so it was a good fit.”

Being a young queer and not going to the clubs is incomprehensible to me — but of course these 20-somethings grew up with the Internet, where you can be gay by yourself, and which looms like a Poltergeist vortex over their work.

“Oh, the vast blessing of the Internet,” boychild half-laughs. “I wish I was better at it. We’re so bombarded with information and images, just so much shit. That can be great because my generation has all of the past available. But we’ve been drowning in this stream of complete crap, too. I can define myself as a freaky-freak just by how I navigate it. But the power of live performance is channeling all that into immediate emotion, a moment when everyone’s together, something that can’t and should never be documented as just images.”

The charming and soft-spoken Dia Dear, who has become kind of a mother the nascent phantasmic drag scene — even though she, like boychild and Vain Hein, operates mostly outside traditional drag house family structures — says, “I haven’t quite figured out my relationship to the Internet. I feel like it’s a positive tool because it can connect us to the spirit of people who are dead. But it’s also this kind of dark rectangle in the corner that can suck out all your energy. It exists for its own sake. But to be on the Internet now, you have to have a certain level of narcissism and self-interest. A lot like you have to have as a performer. Performance and the Internet should be natural lovers, in a sense. Twisted together …entwined.”

This live experimental music concert at the Luggage Store Gallery is the brainchild of one of the brainiest yet approachable people I know, Marc Weidenbaum, who started his fascinating daily music site, Disquiet.com, 15 years ago — way before blogs were invented. His project Disquiet Junto challenges Soundcloud members to respond to a prompt with unique compositions. This round: field recordings of Hurricane Sandy, with Cullen Miller, Subnaught, Jared Smith, and more.

Over the past year we’ve been treated to some tasty South African contemporary dance music flavor, from Black Coffee to Die Antewoord. (Somebody please get the Tshetsha Boys out here!) DJ Dee-toy, of Sebokeng Township continues this great microtrend with deep, deep house vibes and off-your-seat Afrofunk jams.

This monthly party launched the nu-cumbia sound in SF, splashing some much-needed Latin electronica onto our shores, while introducing global bass to a new generation of underground-minded clubgoers. Some major players have stomped the floor here, and quite a few sonic permutations of TT’s sound have found more mainstream success — but founders Shawn Reynaldo and oro11, who brought their inspiration directly from Argentina, are keeping it crazy and real with a marathon tag-team set in celebration.

ATTACK OF THE TYPEWRITERS

Writer, drinker, arts-minded political activist, and bon vivant Hiya Swanhuyser is combining her interests in this neato, monthly, potentially wonderfully absurd thingie. Come to the Makeout Room, grab a drink, and then bang out a letter to any politician you have beef with. “One letter = 100 votes,” she says. Cocktails and truth to power, yasss. She’ll bring the actual, clickety-clackety typewriters! You bring the drink-fueled rage!