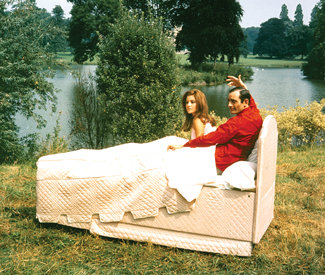 FILM In the 1950s and ’60s silent comedy — which had hitherto seemed as extinct and useless as the dodo — experienced a popular revival, sparked by a Walter Kerr article in Life magazine and sustained by television broadcasts, compilation documentaries, the general rise of a cineaste culture, and the still-breathing status of a few old favorites. (Buster Keaton, for one, spent a very busy last 15 years making guest appearances on both the big and small screen.) That nostalgic interest didn’t greatly effect new Hollywood movies of the era, however, apart from a brief vogue for bloated homages like It’s a Mad Mad Mad Mad World (1963), The Great Race (1965), and Those Magnificent Men in Their Flying Machines (1965), exercises in slapstick elephantiasis that placed mistaken belief in the notion that bigger is always better.

In France, by contrast, at least a couple notable careers emerged devoted to honoring and elaborating on the tropes of silent comedy. The obvious one belonged to Jacques Tati, whose elegant orchestration of the clash between progress and fallible humanity made the modern world its subject while pretty much dispensing with sound (or at least dialogue) cinema altogether.

But Tati also had a protégé of sorts, Pierre Étaix, who had his own similar yet distinct run of films that made comparatively little impact outside France. If they’re almost entirely unknown to us today, that’s in large part because legal complications kept them unavailable for many long years. It’s only recently that they’ve been restored and re-released, reaching the US in a traveling retrospective that lands at the Christopher B. Smith Rafael Film Center this weekend and next. “Pierre Étaix: Lost and Found” is well worth crossing the bridge for — the five features and three shorts it encompasses represent a decade of work for the most part so delightful it seems downright perverse we’re just now making their acquaintance.

Smitten by circus clowning at an early age but also developing considerable skills as a musician and designer, Étaix began a stage career in his late teens. But it was his talent as an illustrator that caught the eye of Tati, for whom he became an assistant during the four years of preproduction on the writer-director-actor’s third feature Mon Oncle (1958). After that Étaix returned to live performance with considerable success, his comedy act at one point opening for quintessential Gallic pop idol Johnny Halladay. It was suggested he try making short films, and the elaborate second such effort, Happy Anniversary, wound up winning the 1963 Oscar for Best Live Action Short.

Still, his producer was reluctant to commit to a feature, so Étaix and his writing partner Jean-Claude Carriere wrote a script episodic enough that it could be released as several separate shorts if necessary. The Suitor (1962) put the star’s flexible prior character — an approximate cross between Keaton, Harold Lloyd, and Steve Carrell — into a series of awkward courtships in response to his exasperated parents’ concern that he will never marry. (The funniest involves his wrangling an extremely drunk woman home from a nightclub.)

It was a success, prompting the much more ambitious Yo Yo (1965), an absurdist microcosm of 20th century history with his titular protagonist reeling from Roaring Twenties to World War II to the gray flannel suit corporate era. The next year’s As Long as You’re Healthy retrenched a bit — it really was three separate shorts strung together (a fifth was rather inexplicably cut and released separately as Feeling Good). Three were amusing; the fourth, involving a farmer, a hunter, and two picnickers creating havoc for each other on a rural day out, is a masterpiece of slapstick intricacy.

After a circus tour, he made his first color feature, 1969’s Le Grand Amour. It had just a wisp of plot (involving the specter of infidelity threatening hero Pierre’s marriage to Florence, played by Étaix’s actual spouse Annie Fratellini), but a surfeit of exquisitely realized gags including a marvelous, surreal dream sequence with locomotive beds.

But then he made an apparently fatal mistake: taking an interesting gamble on 1971’s Land of Milk and Honey, a caustic documentary (and, to an extent, parody of documentaries) that starts out as deliberately clichéd ode to La France then rapidly turns into a prolonged sneer at its citizens. Dwelling on talentless would-be singers in some Gong Show-like forum and ordinary, unattractive bodies on full display at the beach, no more impressed by the hippies than the bourgeoise, its portrait of a vapidly complacent populace struck a nerve when the 1969-shot film was finally released in 1971. It was the wrong nerve — the movie was loathed, and feels mean-spirited even today. Still, it hardly should have ended Étaix’s entire screen career as star and director.

Somehow it did, though, more or less. Étaix found financing for just one more feature of his own (1987’s autumnal Monsieur is Getting Older, not in the Rafael series), otherwise occupying himself with more stage work and TV. He also acted for an interesting mix of directors including Nagisa Oshima, Philip Kaufman, Otar Iosseliani, Jean-Pierre Jeunet, and Aki Kaurismäki — in addition to having earlier worked with Robert Bresson, Louis Malle, and (in the notorious, unreleased The Day the Clown Cried) Jerry Lewis. Now in his mid-80s, he’s stuck around long enough to enjoy his prime work being rediscovered and celebrated for its sometimes hilarious, often near-balletic ingenuity.