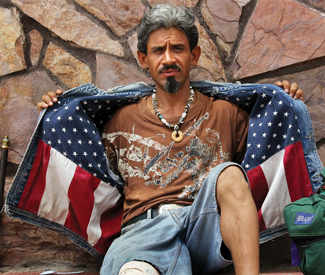 LATIN DISH Whenever politicians start talking immigration reform it always reminds me of the story—perhaps chisme—about that guy, who, you know, burned his neighbor’s house down, and then when the neighbors jumped over the fence to escape the fire, he complained bitterly, just bitterly, that they were trampling his rose garden.

It’s the same with the pejoratives “illegal alien,” or in a kinder mood “undocumented worker.” Both of these terms, like the phrase “immigration reform,” are tricks with words to hide the true status of this unique community.

Just think about the language for a minute. These 12 million human beings, this mass of humanity that has flooded over the southern border of the US, are neither illegal nor undocumented. The precise and accurate English word is refugees.

Why are they refugees? For the most part, the great majority of them are fleeing some sort of political, economic or military chaos—the metaphoric burning house.

You want to know who is burning down the house?

US foreign policy is like a match setting fire everywhere, a sort of scorched Earth in regards to Latin America.

Just so we don’t recount a whole catalogue of arson that is the story of US-Latin America relations in the last century, here’s a current example, that of Honduras, somewhere in Central America.

Even a democrat like President Obama couldn’t resist kicking out the elected president, Manuel Zelaya, in the middle of the night, as if he was a banana worker. I’m talking about the president of the country known as Honduras. The president. Sent out of the country in his pajamas in the middle of the night before the astonished eyes of Latin Americans, a noble action in support of a decrepit oligarchy that has impoverished the country for more than a hundred years as if in a magical-realism novel. And this coup d’ etat, this destabilization of the country, ushered in a whole new level of chaos with total impunity for the oligarchy and the military.

In the aftermath of that tragic June day, hundreds of people would be killed or disappeared. Journalists were assassinated at will. A country so on fire it now holds the sad distinction as the most violent place on earth, more violent deaths per capita than Iraq, Afghanistan, West Oakland or La Misión. Cartels up the yin000-yang — even the US Peace Corps pulled out, couldn’t handle the heat. Are we clear about this?

Now remind me — how many refugees were created by this chaos, by this sickening rerun of the banana-republic-soap-opera bullshit of the 20th century?

Then after his quick knock out in Honduras, President Obama showed his true hand by deporting 400,000 refugees a year in the greatest forced migration in human history. Many of these deportees were sent back to — Honduras, the house he just set on fire.

So you see — it’s a two-faced game, with a perfect cycle of opportunism.

Here’s part of the hypocrisy with this phony immigration reform debate. For the politicos — they only pontificate about their own little border. But this chaos doesn’t just destabilize the sacred border of the US, but also the southern border of Mexico, of Guatemala, of Belize, you know, the domino effect, something that politicos don’t talk about because they have no knowledge of geography.

Now why not use the word refugees? And since the US has just been re-elected to another three-year term on the Human Rights Council of the United Nations, shall we stop the name calling and get serious about the issue?

But wait — if they are named refugees then it would change their status, actually accord them rights and protection — just like any refugee in Africa, Asia or the Middle East. A whole series of UN protocols would come into effect. It would force this country to look hard and deep into its bloody history with the rest of the continent. What politico wants that? And what politico wants to lose million of workers who can be exploited perhaps for generations as long they are kept in the shadows?

So the next time you see someone who might be a refugee — especially a Latino, since Latinos seem to be the main focus of Immigration Control and Enforcement — ask yourself what country that person might be from. Ask yourself if the US created some chaos there — and if you don’t know, try reading some critical histories of the continent. Guatemala Country Occupied by Eduardo Galeano, Or Empire’s Workshop by Greg Grandin. or Masters of War, by Clara Nieto or, well — you get my drift.

As long as the US doesn’t stop creating chaos, propping up mummies and dropping matches all over the neighborhood, you won’t be able to build a fence high enough or long enough to stop the flood of refugees from escaping the fire. Regardless what you do with the “reform” you’ll soon have millions more refugees.

As for the guy who complained about the neighbors trampling his rose garden—well, why did you burn your neighbor’s casita down for pendejo?

Seared with billions in military aid

Slathered with the thickest of lies

Cooked to perfection on fox-no-news

Serve flambéed at the next