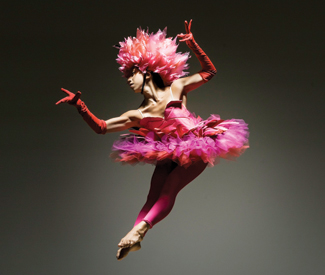 DANCE This weekend the parade of holiday entertainments started off on a festive note, and it wasn’t thanks to another interpretation of The Nutcracker or good old Scrooge. It was a brand new charmer from two experienced choreographers who pooled their artistic resources in 2008 to form Garrett + Moulton Productions. Given Janice Garrett and Charles Moulton’s different artistic temperaments, this union sounded like an iffy proposition. But with three hits to their credit, the duo has proved that opposites do indeed attract.

Garrett and Moulton’s newest endeavor for their four dancers, Angles of Enchantment, might not have been quite as consistently involving as their previous collaborations — but it was such a pleasure to watch the skill with which they handled the tasks they had set for themselves.

Angles was a frothy, endearing, and at-times rambunctious quartet that manages to suggest that we may not be doomed to live frantic lives without time or space for fantasy, abandon, and such a thing as pure fun. It was an excellent antidote to holiday anxiety.

The work’s biggest surprise, and one of its chief attractions, was Peter Whitehead’s imaginative score. In dance, music usually fulfills a supportive role. Here its high profile often drew not-unpleasant attention to itself. With his splendid collection of instruments — from kids’ noisemakers to homemade banjos — Whitehead called up a vibrant soundscape. A gentle singer, his lyrics spoke about the small joys and small pains of ordinary people. This kept Angles’ sometimes madcap fancifulness grounded. The music even suggested narrative threads. It made me wonder how effective Angles would be without that emotional backbone.

In the beginning, when the four dancers momentarily hooked up one-on-one, only to frantically pursue someone else in the next spotlight, it wasn’t clear whether they were playing or escaping. They leaped and grasped and tumbled, piling up on top of each other. But then, after a blackout — there were several — the dancers reappeared as if kissed by fairy dust, cavorting in the most ridiculous tutus and matching headdresses. The whole thing began to feel like a Midsummer Night’s Dream.

Tegan Schwab became an airborne, mischievous fairy with fingers and feet aflutter, when she was not interfering with Whitehead’s music making. A little later she morphed into a majestically promenading tree under which Nol Simonse found momentary respite. Lanky Carolina Czechowska, perhaps a wood sprite, sported what might have been an acorn hat — until she returned in a black tutu and sexy gloves, as a sexy sorceress whose breath made everyone tremble.

Tanya Bello and Simonse, both of them longtime colleagues in the company, paired up for a series of quasi pas de duex. They were our lovers, teasing each other with playful touches and kicks. Sitting together on a bench, they looked like the end of a Hollywood movie.

Bello barely comes up to Simonse’s chin, but their yearning arms interlocked as equals. And if Bello and Simonse are physically different, temperamentally they are even farther apart. It’s what gave their dancing together such frisson. Bello was a witty whirlwind, whether she spun like a top or raced circles around a partner. Languid and fluid, Simonse could not deliver an inexpressive gesture if he tried. He remains a marvel of a dancer.

There was something vaudevillian about the way Angles’ individual scenes, separated by darkness, followed each other. The structure did not quite sustain itself for a whole hour, delightful as this flight into a world of fairies, pixies, and playful Pucks was. Angles ends on a note of pure hilarity. For the finale, the dancers dressed in ballet wedding outfits: the women in huge white tutus, Simonse equally splendid in half a frock coat. And just to top it off, designer Margaret Hatcher adorned them with strings of Christmas tree lights. Happy holidays to one and all.