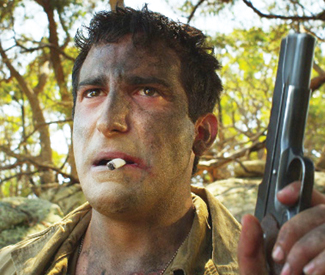 FILM Unlike the San Francisco Independent Film Festival’s flagship event and its popular DocFest, which more or less put roots down at the Roxie, genre fest Another Hole in the Head spreads its horror, sci-fi, and just plain weird wealth around to various venues. Yeah, the Roxie’s still on its list, but HoleHead also hosts events down 16th Street at the Victoria Theater, and at SOMA’s Terra Gallery and the Vortex Room — the latter an inspired addition, given the Vortex’s reputation as a haven for mondo cinema.

This year, HoleHead opens with a screening of Richard Elfman’s 1982 cult musical Forbidden Zone, presented in — holy Tyrrell! — remastered and colorized form. Elfman will be on hand to answer all your Sixth Dimensional questions, and a party (complete with Oingo Boingo cover band) follows.

Closing night looks to be a decidedly less festive affair, with Austrian director Michal Kosakowski’s unsettling Zero Killed — a feature film spun from his video installation and short film project, Fortynine. From 1996 to 2006, Kosakowski interviewed people about their murder fantasies, then used the tales (suicide bombings, school shootings, dog attacks, dinner-party poisonings, stabbings, shoving people into traffic or letting them slip off cliffs, etc.) as short-film inspiration, starring the storyteller as either perpetrator or victim.

A haunting musical score ups the creep factor, as Kosakowski tracks down each participant (many, but not all, are actors by trade) to interview them about their specific fantasies and other troubling topics, like revenge, torture, and “What is evil?” Zero Killed is a uniquely disturbing mix of fiction and documentary, cutting between horrific, blood-soaked vignettes and clinical talking-head interviews — often featuring the same subject.

There’s plenty of blood gushing forth in slick British standout Axed (listed as “Fangoria presents Axed” on the HoleHead schedule, so that right there should assure you of its splatter cred). When a businessman is, uh, axed from the corporate gig that turned him into an uptight prick long ago, he goes all Jack Torrance on his wife and teenage kids. As you might guess, the titular implement figures prominently in his plans, and Ryan Lee Driscoll’s film spirals from satirical to sadistic as each new body drops.

Changing gears, from in-your-face to perhaps too subtle: posting recently to his Observations on Film Art blog, scholar David Bordwell scrutinized what he called “discovered footage” horror films, with a focus on the Paranormal Activity series. Bordwell took particularly interest in the “rewards and risks” of the genre’s “narrow set of stylistic choices.” In these films, the camera itself occupies a heightened presence within the story. By now, everyone knows the psychological effect that’s supposed to have: if we’re aware of the camera, and it seems like an actual person is filming what we see, the images appear more real — and hopefully, “the reward” translates to genuine shrieks in the dark.

But for every Paranormal Activity sequel that’s seen by millions and rakes in hundreds of millions, there are dozens of copycats. And why not? Found-footage horror is non-traditional filmmaking at its most democratic. It can be made on the cheap, and wobbly production values are de rigueur. Unfortunately, it’s a lot easier to get ahold of a camera than to come up with an original idea, much less one that yields actual moments of fright.

With that said, The Garlock Incident does make an effort to tread new, albeit Blair Witch-y, ground. The set-up is that a group of Los Angeles actors — appealing 20-somethings all — are en route to Vegas for a movie shoot. Also in the van is ambitious director Lily (Ana Lily Amirpour), who obsessively films everything. After taking a spontaneous detour to visit a ghost town with a sinister back story, they discover a couple of maybe-abandoned shacks — and soon realize that getting off the main road was a bad idea. Oh, kids. It’s always a bad idea, especially for city slickers who can’t function without cell service.

Garlock‘s frustrating ending, which I wouldn’t dare spoil even if I fully understood it (even after watching it several times), is a letdown. Until its last act, though, Garlock is actually a pretty interesting look at how quickly relationships can break down when circumstances slide from uncertain to dire. But once you start puzzling over the ending, other doubts surface — like, by what logic would the actors’ audition footage be neatly edited into this roughly-shot, “found” chronicle of wilderness terror?

Speaking of wilderness terror and, alas, unsatisfying finales, retro-styled sci-fi adventure The 25th Reich screeches to a halt with a “to be continued” cliffhanger, just when shit is starting to get mind-blowingly insane. Argh! Fortunately, for the most part, the film — about a group of World War II soldiers who time-travel back and forth, squabbling among themselves as they pursue UFOs and Nazis — works just fine as a stand-alone, though its gleeful reliance on stereotypes (the Jew, the Italian, the Southern redneck, etc.) feels less like a nod to classic war films than a way to avoid actual character development.

The best gimmick centers on Captain O’ Brien, an erstwhile matinee idol not above reciting cornball lines from his own films at crucial moments. That he’s played by Jim Knobeloch — who also appeared in 2012’s other Nazi sci-fi flick, Iron Sky — is a perfect bit of obscure-genre synergy.

It wouldn’t be HoleHead without zombies. Comic The Living Corpse gets the (re-)animated treatment in The Amazing Adventures of the Living Corpse, which follows the titular beastie’s existential crisis after he — oops! — rips apart almost his entire family. Spared is a young son who is sent to a creepy boarding school for orphans, though he’s soon plucked from its halls to apprentice under a mad scientist. Meanwhile, the guilt-ridden corpse — real name: John Romero; memo to creative types: naming anyone “Romero” in your zombie-related whatnot is no longer a novel idea — roams the underworld and the land of the living, meting out occasional supernatural ass-kickings but mostly searching for his long-lost offspring.

The haunted-school scenes (complete with a kids vs. demons showdown) are clever, and the catchy soundtrack has punky flair, but the sheer number of plot threads nearly overwhelms the 82-minute film — maybe cool for fans of the comic, but viewers new to the material might wonder why, say, the “Spectral Protection Society” is elaborately introduced and then discarded. The overall effect is not nearly as fun (or “amazing”) as it should be.

Amazing, however, is one of many gushing adjectives I might use to describe my top pick of the festival: Mike Malloy’s Eurocrime! The Italian Cop and Gangster Films That Ruled the ’70s — a jazzy, lovingly-compiled homage to some of the trashiest, most mean-spirited films ever made. Everyone’s heard of Spaghetti Westerns, but poliziotteschi movies have yet to make a true cult breakthrough (or be remade by Quentin Tarantino, but I’m sure he’ll get there eventually). A groovy-sleazy score and endless clips, posters, and still shots set the tone for Eurocrime!, which gathers some of the genre’s biggest stars (laid-back John Saxon; gracious Franco Nero; bratty Antonio Sabàto) to look back at their years chasing each other across rooftops, brawling in junkyards, and working with directors like Umberto Lenzi (“the screaming-est director I ever met in my life,” according to actor Henry Silva).

The doc, a tad long at 137 minutes, also explores why the films became so popular, despite the fact that their scripts were often ripped wholesale from American “angry cop” films (and, later, from each other) — and why that popularity didn’t last (possible culprits: laughable dubbing, distracting mustaches, brutal violence against women). Newcomers won’t believe that such a world of insane film exists, longtime aficionados will dig the nostalgia, and both camps will enjoy Eurocrime!‘s high-energy appreciation of a genre long overdue for this kind of treatment.

ANOTHER HOLE IN THE HEAD