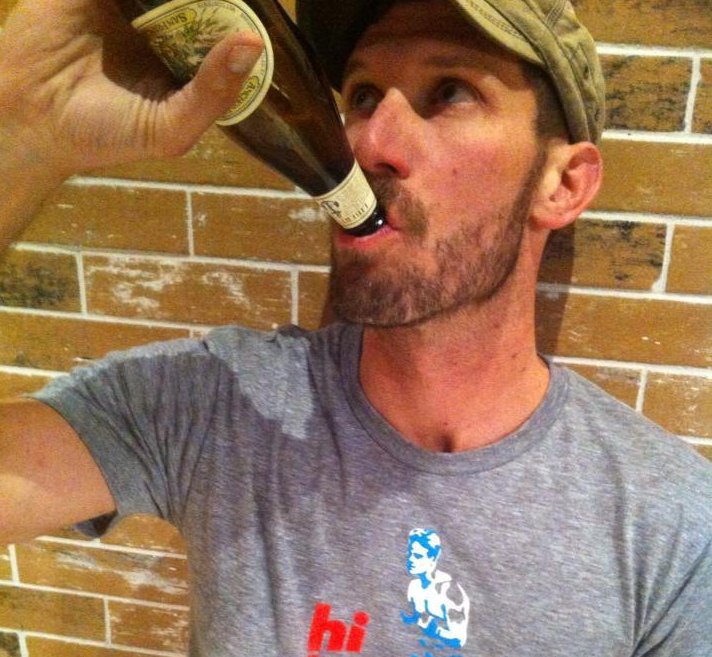 SUPER EGO If, by some miracle, I manage to make it through this entire column about a new gay sports bar in the Castro without dropping a single awful double entendre, then I totally deserve a Stanley cup, a Heisman trophy, and a Super Bowl ring. IMPOSSIBLE! Why does everything jocky sound so dirty when you sprinkle a little fairy dust on it?

But other than a few ironic touches (“No, we won’t be playing that Huey Lewis Sports album,” the painfully lithe and hip Woodward assures me), Hi Tops will be all about the gayme: 15 screens, including a video wall and hanging Jumbotron configuration will pump out local tourneys, while the kitchen, headed by former Top Chef contestant Jamie Lauren, turns out gourmet takes on “stadium food,” including warm pretzels, chicken wings, beef-bacon burgers, Cobb salads, and pork chops on a stick.

No worries about this being an overcompensative no fats no femmes dude-bro move: Woodward, who’s no stranger to underground alternaqueer dancefloors, merely wants to complement SF nightlife with some unique flavor. “What inspired me to do this was the lack of any place to go with my teammates after a basketball game where we could hang out and talk, but not have to shout over music. I also think that, looking at the Castro, the neighborhood could use something like this to make it exciting. A lot of bars offering something different have closed, and the scene here has become really one note.” Yes, Jesse, and that one note is Rihanna shrieking at us through her tiny, alien nose.

Hi Tops takes the place of fuschia-tinted hetero barf puddle Lime, where I used to go through purses. Anything would be an improvement, but a totally gay (and lesbian!) sports bar that plans to sponsor local queer teams and host fundraisers sounds pretty neato. Plus, barbacks in jockstraps hello. This place will totally be my new Hooters.

I haven’t always fallen for his post-modern, Scion-sponsored Blaxploitation schtick — skinny white DJs in Europe still think it buys them instant street cred to sample him; annoyingly they’re often right. But Kenny Dixon Jr., known to the world as the mercurial Moodymann, sure knows how to pump out the classics, foretelling the current wave of re-edit mania by about a decade and representing the Detroit house scene with a soulful flair for experiment and a thrilling rage against the obstacles that still stand in the way of international recognition for many African American dance music artists. He’s a talker on the decks and often anarchic: last time he was here, he got bounced from his own party. Buckle up and work it out, finally some danger. With UK deep techno martialist Untold and the Icee Hot crew.

Are you even ready for Finnish acid? Of course you are: Tin Man’s hypnotic, energetic yet urbane tracks have been staples on quality dance floors for well-nigh half a decade. Johannes Auvinen was actually raised in Cali, thus the extra bit of sunshine peaking out of his peaks and polishing his deeps. On 222 Hyde’s great soundsystem, he should have the basement walls swaying in no time for his SF debut.

House purists took a moment to warm to Dyed: he seemed to leap fully formed from the Paris club scene and land too perfectly near the top of the Ibiza favorites list. But in the past few years, he’s delivered some incredibly lovely and historically-eared mixes and remixes (many coproduced or inspired by the European scene’s exceptional female cohort) that have everyone convinced. He’s the real deal. And so smiley!

Um, in case you missed it, 90s house is back. But rarely do we get a chance to hear the story of that interesting and incredibly varied decade from the San Francisco DJs and producers who made it all happen. (When Doc Martin plays a retro set here, it’s a main event.) So having Fred Everything, David Harness, Jay-J, Solar, and Jayvi Velasco hit the decks on Mighty’s big-room rave-worthy system, for free, all night long is an education no young neophyte should pass up.

How much does SF adore this British-Italian disco mage, 1/4 of the wildly popular Horse Meat Disco crew? Find out in a sweat on Honey Soundsystem’s dancefloor as he tours in support of a new compilation of his favorite tracks (including some local faves) on Classic Records. Love!

*The original party, as listed in the print version of this article, was set for Thu/29. This version has been corrected.