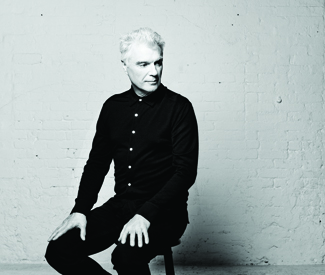 LIT If you’re seeking the perfect present for the music obsessive in your life, consider picking up a copy of David Byrne’s How Music Works (McSweeney’s, 332 pp., $32). A thorough exploration of the many facets of music-making, including music industry contracts, philosophical musings on the art of creation, and the scientific principles of tonality, Byrne’s book can be read like a field guide by aspiring musicians, and as an armchair adventure for those whose knowledge of music begins and ends with Pandora.

Intelligent without being overly-analytical, detailed without being didactic, what Byrne conveys most successfully is his own exuberant curiosity for his chosen topic. Like Bill Bryson’s A Short History of Nearly Everything, in which Bryson painstakingly researched the scientific foundations of the universe in order to be able to make sense of them himself, How Music Works often reads like an earnest inquiry conducted by a passionate amateur. That Byrne comes by his knowledge of the workings of the music industry a little more easily — as an elder statesman of art rock, he has decades of personal experience and anecdotes to draw on — fortunately doesn’t render his presentation self-aggrandizing or abstruse.

Although the title of the book seems to indicate a focus on the principles of music theory, a large bulk of the book actually focuses on the technological processes that music has been subjected to over the centuries — from the invention of the first musical instruments to that of Edison cylinder recorders and eventually MP3 players. In his first chapter, “Creation in Reverse,” Byrne presents the theory that specific music has been created to fit certain acoustical contexts. He examines a variety of musical styles — unamplified, percussive ensembles of West Africa, whose music sounds most optimal when heard outdoors, unconfined; long notes and modal structures of Medieval church music, created to fill the vaulted echo chambers of Gothic cathedrals — speculating on how they evolved first to fit the given architecture, and how architecture subsequently evolved to fit the music, as with Wagner’s uniquely-designed opera house in Bayreuth.

He points out how the architecture of even a respected venue like Carnegie Hall might actually be detrimental to the overall sound of a percussion-heavy, experimental rock band, while later he describes the perfect balance of architectural elements that conspire to support such a band and its satellites.

Organized in ten chapters, each tackling a specific thread of thought, the flow of the book can be likened to that of a rock album: a few obvious hits, a couple of minor throwaways. One of the latter is the chapter entitled “How to Make a Scene,” which is also one of the shortest, a moderately interesting rumination on what it takes to create an identifiable music “scene” in terms of architecture, policy, and business philosophy (his exemplar being the now-defunct CBGB). While it makes some interesting points, it could just as easily be missing from the book and no one would particularly mourn its absence. Another, entitled “Collaborations,” is similarly brief, and its appearance between a chapter on the mechanics of recording and the financial realities of the music business doesn’t make for a smooth transition, tonally or thematically.

On the other hand, chapters such as the two entitled “Technology Shapes Music” (covering both analog and digital) are as thorough as they are fascinating. Beginning with the earliest sound recordings in 1878 to an in-depth user’s guide to the music software that has become the industry standard (even for confirmed oddballs such as Byrne), these chapters offer a thoughtful analysis on not just how music works, but also how it’s worked. Finally, in chapter ten (“Harmonia Mundi”), a mere 302 pages in, Byrne turns to the scientific and spiritual principles of music and music theory. Music, it appears, has been around about as long as human beings have, as fragments of 45,000 year-old flutes and pictorial evidence found in Mesopotamia and Egypt help prove. He veers off into Pythagorian territory by expounding upon the so-called Music of the Spheres, and ventures into tantric philosophy, which asserts that the vibration of the universe is generated by Shakti and Shiva having sex.

The book ends on a note of bittersweet optimism, contemplating a future where human composers could actually become obsolete. It’s a future Byrne claims not to fear — while still expressing admiration for music makers past and present, and gratitude for his own place, in this moment, within their ranks.