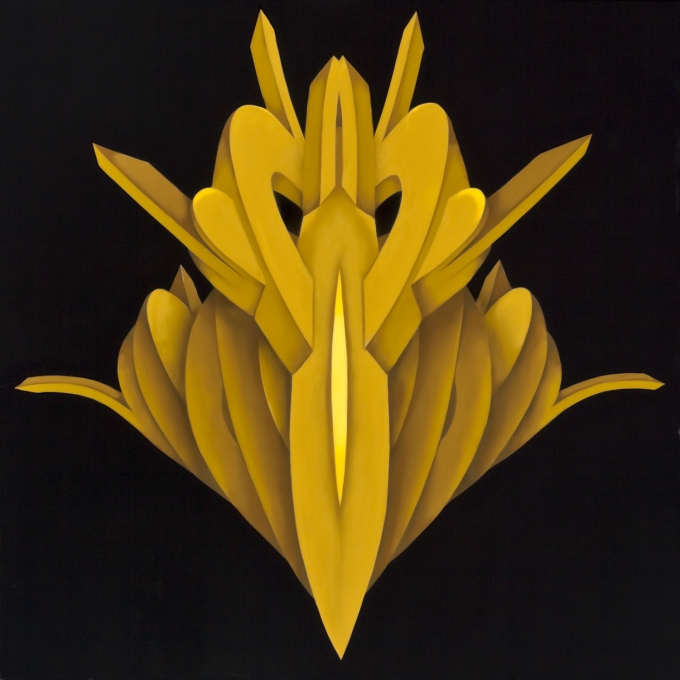 VISUAL ARTS Glossy and matte stripes alternate across the walls and floor of the 941 Geary gallery in the Tenderloin, occasionally illuminated by striking reflections from the exhibition’s 10 hanging canvases. These are perfectly symmetrical morphs of traditional letter-form graffiti, each done in Easter-ready pastels, save for a black-and-white tag that takes up one enormous gallery wall.

“I just want to continue painting different visions I have,” says the creator of this immersive art experience, visual artist Ricardo “Apex” Richey. He got his start tagging the streets of San Francisco in the early 1980s, perfecting his now-revered, precise hand forms inside Muni buses and walls around the city.

“Reflected,” this new solo show, plays on the entrance into the gallery world of an art form once done covertly on exterior walls. He’s taking graffiti and, like artists before him, skewing and reimagining it. “Abstracting the notion of Apex,” he tells me.

With the current mania for street art-inspired pieces, Apex has been able to make a career of his work. He capitalizes on the legions of graff-nerd followers on his social networks, and his drive to refract and skew the recognizable shape of graffiti in endless ways. The 941 Geary show was inspired by an iPhone app that allowed him to mirror pre-existing works. After speaking with Justin Giarla, founder of 941 and the rest of the White Walls family of urban art galleries, the two decided the idea merited more exploration.

But during the same week “Reflection” opened, Apex’s personal life was morphing as well. After three years in an epic factory-cum-studio on Market and Sixth Street, his building was sold and he was out. Goodbye to its 13-foot ceilings and the rotating, 10-foot high windows that look out on Market.

And goodbye to the museum he’d been curating upstairs on the roof, where SF street artists Chez and Neon had contributed massive works, among others. Painted vegetation by muralist Mona Caron curled to the sun in a piece one could nearly see from Trailhead, the pop-up cafe down the street in the Renoir Hotel whose back wall, by chance, is graced by a collaboration mural done by Caron and Apex.

If you wander around the Mid-Market neighborhood, it’s not hard to see that Apex spends his nights working in a neighborhood studio. He’s certainly left his mark. The first piece in the area was Yerba Buena Liquors’ sign, years ago. Since then he’s painted all over the place. The corner of Turk, Mason, and Market Streets is graced by a super-burner of his, a phrase coined to describe his pieces that use hundreds of hues of aerosol.

“I would love to stay there,” he tells me at his new FiDi day job (more on that in a sec.) “In that regard, this is kind of sad.” But Apex knew he was in the studio and roof space on borrowed time — rumors had swirled since he first moved in that the building was for sale. He sees the “gradient” of real estate prices, that Sixth Street was an anomaly in a ridiculously expensive city to live in.

“On one hand it sucks, on the other, I understand it. Overall, it’s better for the city.” He’s looking for a new space anywhere in the “industrial band” that loops between his old studio and Potrero Hill, hoping to get lucky with one of the city’s few remaining industrial spaces.

And, as his solo show is testament, he’s not letting the forced move stop him. That day job? He bought a coffee kiosk. The business is about him “trying to be mature,” he says, laughing as he talks about Otis Cafe, the Four Barrel-equipped stand he’s set up in the Otis Lounge nightclub entryway (25 Maiden, SF) where you can now find him weekdays from 7am to 3:30pm.

“This idea popped into my head,” he says. ‘Coffee cart, that’s a low end startup.” The Maiden Lane micro-‘hood lacks designer coffee, and on the day I visit, new regulars are already lining up.

For Apex, the kiosk is just product of a creative mind. “I feel very blessed, fortunate,” he muses. “Like, I’m an idea person. Painting, art allows me to get the most of those ideas to come to light.” The Otis Cafe sandwich board and cart bear Apex’s signature loops of color — a new home in the downtown area for the artist himself.