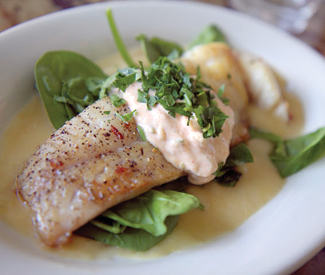 APPETITE Two unrelated seafood restaurants have quietly undergone chef and menu changes in the last year. I was less than impressed with both when they debuted; now they’ve taken a turn for the better. There’s a low-key Mission seafood outpost with vegan accents, Weird Fish (renamed Dante’s Weird Fish), and a Financial District restaurant catering to the FiDi set, Georges, with upscale-casual seafood.

Tiny Weird Fish (2193 Mission, SF. www.weirdfishsf.com) has been around a few years, pleasing vegans and hipsters alike with grilled fish and seitan tacos. Owner Tim Holt left in 2011 to focus on Roshambo Farms (www.roshambofarms.com) in Healdsburg, which still supplies the restaurant with much of its produce. Holt opened Weird Fish with Peter Hood, who is back as owner alongside Ryan Simas, returning to roots of fish and vegan options, infused with new life. Simas knows seafood as chef de cuisine at Farallon, where he’s worked for nine years, now simultaneously co-owner at Dante’s and its neighbor, The Perch, eventually supposed to open next door.

Dante’s all day hours and a playful, affordable menu (discounted during lunch hours) are its selling points. Portions are small, but it’s rare to see enticing fish entrees under $10 — think of it as piecing together a meal. I can’t say the hit-and-miss aspects of the former Weird Fish has entirely changed, but I notice greater consistency and higher “high points” than before. “Pete’s famous clam chowder” ($4.75 cup, $6.75 bowl) is one surprise. Unlike the bland tortilla soup, the creamy chowder is flavor-rich with spanking-fresh clams. Fish and chips ($11 for two pieces, $14 for three), filling all on its own, features fresh fish of the day, flaky and light in Speakeasy’s Big Daddy IPA beer batter. A mix of sweet potato and regular potato fries falls flat, but fried fish dissolves comfortingly.

The vegetarian Waco Taco ($5) is one of their best bites. Though I’m a fish taco fanatic, a tilapia fish taco tasted over-salted and lifeless under mango salsa compared to this lively Waco Taco, packed with mashed yams, spinach, pepitas (pumpkin seeds), and guacamole. Fried calamari ($9.50) is perked up by fried lemon and sage leaves, dipped in lemon aioli and oh! chipotle sauce. Among fish entrees, I’ve fared best with Dijon-almond encrusted rainbow trout ($9.50) alongside buttery mashed yams ($4.75) laced with coconut milk and curry.

Dante’s casual, rock-and-roll (sometimes blaring a bit loud in the small space) attitude is a bright spot on Mission Street, uncommon if not “weird,” amid a sea of taquerias and 99 cent stores. In its Dante’s incarnation since March, Weird Fish captures the quirk of former days with greater focus on the food.

Georges (415 Sansome, SF. www.georgessf.com) took over the Financial District’s classic London Wine Bar in 2010 (which lacked an impressive wine list but boasted dated charm), completely revamping the space from dim, old school to white and airy. I dined during opening weeks — but was immediately turned off by overcooked fish at high prices. I didn’t return until a couple months ago, having heard good things about Chef Michael Bilger who came on in early 2011 from Wayfare Tavern, and now defunct Moose’s and Vivande Porta Via. Bilger’s cooking is a marked improvement since my 2010 visit.

Lunch is a bustling, convivial time to dine. As with lobster rolls, a Dungeness crab roll is expensive ($21), but a real beauty. Lush white crab is packed between bread with basil, piquillo pepper, and pleasing Southern touches of fried green tomatoes and remoulade, and the whole thing is accompanied by housemade BBQ potato chips. A silky crudo ($15) of albacore tuna cleanses the palate alongside a crisp white wine. Six cuts of tuna rest on hearts of palm, reasonably doused in garum (a fermented fish sauce I’m seeing on many menus lately), McEvoy Ranch olive oil, and vivid Meyer lemon.

Mussels and frites ($16 for mussels, $20 with fries) comfort on a chilly day, particularly with beer. Bilger steams plump mussels in Ommegang Witte beer, the broth exhibiting notes of fall from Rubinstar apples, savory with smoked bacon and leeks. One seafood misstep on a follow-up visit, however, was an overcooked, dry albacore tuna confit in bucatini pasta, tossed with zucchini, Calabrian chilis, Castelvetrano olives, and dose of bread crumbs ($16 lunch, $19 dinner). An affogato, a robust shot of espresso drowning lush vanilla gelato, the glass covered with a waffle cone crisp, is an ideal finish and caffeine boost before returning to work.

Georges is pricey but not out of line with the FiDi or the quality of ingredients. It’s not the same restaurant I dined at when it opened… and for this the entire staff deserves kudos.