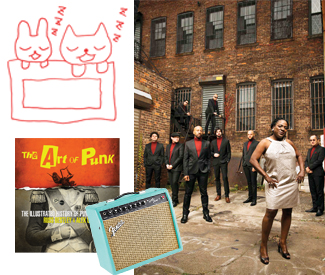 TOFU AND WHISKEY’S HOLIDAY GUIDE Before I expound on anything, I’ve got to spit this out: buy local. If you’re going to buy something; in particular, if you’re going to buy actual vinyl records or CDs or books or musical equipment, get them from an independent store in the Bay Area.

Support Aquarius, Amoeba Music, Black Pancake Records, GROOVES, 1-2-3-4 GO!, Recycled Records, Rooky Ricardo’s, Rasputin’s, Streetlight, and the smaller mom-and-significant-other type stores; otherwise, the brick and mortars will slowly die and we’ll be stuck rifling only through the virtual library, which will inevitably lead to a host of other problems (loneliness, fatigue, hive mindedness).

Making it even easier to shop live, Record Store Day has a Black Friday special releases list (Fri/23), which means there will be lots of specialty music and rare editions on the shelves. And yes, some detractors complain of the single-mindedness of asking shoppers to obsess over rare vinyl jewels just one day a year — actual Record Store Day takes place in April — and that most of the items end up online with jacked up prices anyways. I disagree with this mindset, especially around the holidays. That push can make the difference for a struggling independent shop. Keep in mind, this is not advocating for actual Black Friday shopping at Wal-Mart and the like. End rant.

Last year, all I wanted for Chanukah was the Phil Spector box set, each disc enveloped in tiny cardboard sleeves made to replicate the original records in miniature — like dollhouse versions. I got the CDs, and have listened to the Crystals’ “Frankenstein Twist,” on average, once a day for these past 12 months. This year, I’m just not sure what to covet, so I asked around.

From my non-academic study, I found that musicians tend to be of the practical angle when it comes to gifts. They want extra cables, or picks, headphones, or record needles. One mentioned the Fender Champ amp, which is good for thin-walled apartment use, or the $39 Fireye Mini portable headphone amp. Better yet, a gift certificate to a (local) music shop — try spots like Real Guitars (15 Lafayette, SF; www.realguitars.com), SF Guitar Works (323 Potereo, SF; www.sfguitarworks.com) or Starving Musician (2474 Shattuck, Berk; www.starvingmusician.com).

Those one step apart from the musicians, the quintessential music nerds such as myself, on the other hand, tend to desire the ostentatious and/or extraordinary. They want that rare, hard-to-find seven-inch on white vinyl, the oversized coffee table book, or that carefully curated box set.

Or something else entirely: a gift subscription to Turntable Kitchen’s pairing boxes ($25/month, www.turntablekitchen.com) is a particularly cool gift that’s based right here in the Bay. The boxes ship once a month and include dry ingredients, recipes, and limited edition seven-inches, often by local musicians.

Now on to the music shops. The specialty records, box sets, and CDs in general that stuck out to me as great gifts this year — of course dependent on the listener — are Blackbird Blackbird’s covers of Kate Bush on limited edition vinyl with origami, Castle Face Record’s The Velvet Underground and Nico Tribute, and new box sets from the English Beat, and Death Cab for Cutie. That Castle Face Records full album tribute features covers by a who’s-who of revered locals: Kelley Stoltz, Fresh and Onlys, Warm Soda, Ty Segall, the Mallard, and more (www.castlefacerecords.com).

For the Chanukah specific, I’d recommend ‘Twas the Night Before Hannukah: The Musical Battle Between Christmas and the Festival of Lights. It’s another release from the Idelsohn Society for Musical Preservation, generally the best archivists of vintage Yiddish and Jewish-centric music from the past century or so. The 34-track double CD comp includes Chanukah songs by Woody Guthrie, the Klezmatics, and Mickey Katz, along with Christmas tunes performed by Jewish musicians like Lou Reed, Herb Alpert and the Tijuana Brass, and the Ramones.

An added bonus, there will be a ‘Twas the Night Before Hannukah show at Brick and Mortar Music Hall in December (Dec. 15, 9pm, $15–$18, 1710 Mission, SF. www.brickandmortarmusic.com), with live appearance by Luther Dickinson, Sway Machinery, Thao, Steve Berlin, Ethan Miller, and Ceci Bastida.

As for books, there’s a new coffee table beast that I’ve been dying to talk about called The Art of Punk: The Illustrated History of Punk Rock Design (Voyageur Press, 224pp, $40), by Russ Bestley and Alex Ogg. It’s a beautiful hardcover with splashy images showcasing the aesthetics of punk; graphic fliers, posters, album covers, patches, and other imagery from the proto-punk era through the present, including international punk art, hardcore designs, and fringe elements (though aren’t they all?). Interesting, there’s another great book on punk graphics released this fall: Jon Savage’s Punk: An Aesthetic (Rizzoli, 352pp, $55).

As The Art of Punk puts it, “The value of such groundbreaking artwork, which continues to have an impact on music, fashion, design, and media to this day, is even now only becoming fully apparent. The visual legacy of punk is extensive and its graphic codes — symbols of struggle and resistance, but also a complex subcultural visual vocabulary, and more cynically, a means to tap into deeply held antiauthoritarian consumer sentiments by lifestyle branders — still have resonance. “

The books will appeal to anyone that ever spent hours carefully sewing garish back-patches to jackets to represent the music they believed in, or those who stared at album covers so long their eyes crossed, and the imagery has been burned in their brains ever since. Basically, the music nerds we’ve been shopping for here today.

SHARON JONES AND THE DAP-KINGS

It’s the swinging, soul-funk group’s first headlining show in San Francisco in more than two years, and in the grand Davies Symphony Hall to boot. The Brooklyn nine-piece Dap-Kings, is of course led by the velvety, luminous Sharon Jones and will likely be belting tracks off 2010’s I Learned the Hard Way LP.

With Jonny Manek and the Depressives