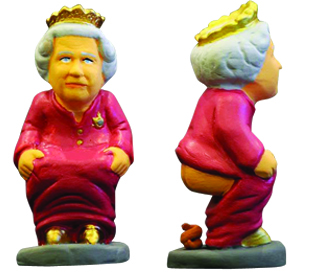 don’t poop herrings, which are too salty,

poop sweet almond cakes, which are much better!

if you don’t poop well, I’ll hit you with a stick,

HOLIDAY GUIDE Despite its media image, Detroit is a vastly diverse place, full of Hmong, Arabs, Christian Lebanese, Chicanos, Jews, Greeks …. but very few Spaniards, at least that I know of.

So it may seem a bit out of place for my family to be kneeling each year around a blanket-covered log that we’ve drawn a smiley face on, beating it until it “poops” out presents — an ancient Catalonian tradition known as tió de Nadal, or the “Christmas poop log.”

We call him by his more informal name, Caga Tió, and he comes to stay with us every year, bringing us a kind of exotic, slightly malicious delight. (Much better we beat up a log than each other.) About two or three weeks before Christmas, we set him out on our hearth and cover him with a small blanket. Each night, just like for Rudolph and friends, we lay a plate of treats and some milk for him. The treats are gone by morning, and Caga Tió starts to swell underneath the blanket. Soon, Caga Tió is one fat, smiling log!

Then, on Christmas morning, we gather around him with sticks and sing a slightly different Spanish version of the song above. (How slightly different depends on how much spiked eggnog we Anglophones have imbibed.) Then we beat him vociferously with the sticks.

We’ve literally beaten the shit out of him! And the shit is presents. We reach under and see what Caga Tió has been kind enough to poop out. One year the gifts were tiny windup toys that we raced down the kitchen table. Another, it was fake mustaches for a hilarious family portrait. And another it was various plastic animal noses, and 3-D puzzles, and chocolates. No sweet almond cakes (a.k.a. turrón) yet, however.

How did my family embrace this strange practice? In January of 2006, I’d just gotten back from attending my friends’ wedding in Madrid, one of the first legal same-sex weddings under Spanish law, performed by the member of parliament who sponsored the bill. In Bush’s America, this was unimaginable. So I brought back an obsession with all things Spanish. The Catalan region lies east and north of Madrid, but one night I fell into a Spanish history Youtube hole (a Yubehole, if you will) and came out with the poop log on the other end. I was determined to try it when visiting my parents for the holidays. They loved it — it was something different we could share as a far-flung family — and we’ve continued ever since. Once he’s pooped out your gifts, you’re supposed to burn the log like a yule log. But we’ve kept the same one: he’s almost part of the family!

Why poop for Christmas? Let’s just say the wonderful people of Catalonia are big on holiday shit. Besides the tió de Nadal, derived from medieval Catalan mythology and beaten for centuries, they’re also keen on exquisitely hilarious caganers, tiny porcelain figurines of well-known personages that they place in the background of nativity scenes. And what are these personages doing? Why taking a dump with their pants around their ankles, of course. Darth Vader, Justin Bieber, Spongebob, Obama, the Queen of England, the Pope — all are fair scatological game. It’s a good-natured note of vulgarity that reinforces the immediacy of life amid all the theological pomp and mysticism.

Caga Tió isn’t so strange to Americans: South Park‘s Mr. Hanky, the Christmas Poo, is a famous manifestation. Soon, maybe, you’ll be beating a poop log for the holidays, too. And you thought you wouldn’t get shit for Christmas.