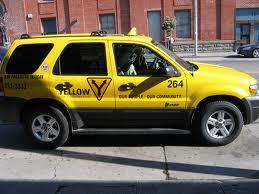 Of course the Chron portrays it as “The latest battle pitting disruptive high-tech innovators against old-school industries and regulators,” because that makes for good copy. It also puts the taxicab industry and the people who oversee it in the position of being dinosaurs fighting against an inevitable new world.

But seriously: This has so little to do with smart phones and apps and GPS systems. Those are tools that anyone can use, and the local cab companies ought to and will soon anyway.

What it’s about is the notion that there are such things as public utilities that ought to be regulated in a way that protects the public.

San Francisco decided as a city many, many years ago that you can’t just stick a sign on your car, call yourself a taxi and start charging people for rides. That’s fairly standard practice in American cities, where cabs are considered part of the transportation system — and are a service that, without regulation, is ripe for consumer fraud and safety problems.

Not to make too broad a case, but in California, you can’t just hang out a sign and call yourself a contractor and start applying for building permits. You need a license. You can’t just open a bank and start making loans, at any interest rate you want. You can’t call yourself a dentist and start pulling teeth, either. There are good reasons for these rules. (I suppose some day someone will suggest that surgeons should be chosen not by the AMA or by state licensing boards but by Yelp; some guy cuts off the wrong part of the body or kills someone on the operating table? Hey, he won’t get a good rep on social media and his prices will have to come down. But I don’t think that’s such an excellent idea.)

Even conservatives agree that there needs to be some form of business regulation — and when it comes to cabs in a major urban center, those regulations need to include safety tests and standards on the vehicles, safety checks for drivers (a DUI in the past three years will make you ineligible to drive a cab in SF), a system to regulate fares (so tourists who don’t speak English or understand US currency don’t get cheated) and, perhaps most important, an oversight system that allows people to complain about incompetent or dangerous drivers — and have those complaints investigated and addressed by a government agency.

The battle between the new high(er)-tech faux cabs and the existing industry is also being portrayed as selfish, entitled drivers not wanting to give up their piece of the game:

SideCar’s Paul, a onetime congressional policy analyst, said the issue might eventually work its way up to the governor’s office, which oversees the commission. “The PUC has an existing set of rules that were written for an era when communication technology was literally just a landline telephone, and they’re trying to shoehorn them into this new world,” he said. SideCar is also using social media to drive support of an online petition to the PUC. Within 24 hours, the petition at Change.org had more than 5,000 signatures. “Change always threatens incumbents,” wrote Tim O’Reilly, a Sebastopol business owner. “But some incumbents find ways to get government on their side and try to restrict competition.”

But let’s have a little perspective here. We’re not talking about (unregulated) musicians complaining about MP3 downloads and song-sharing or old-school (unregulated) newspaper publishers complaining that Craigslist took all the classified ads. We’re talking about an industry that is part of a public infrastructure and needs to fall under direct government supervision.

There are good reasons why San Francisco limits the number of cabs on the streets — and it’s not just industry corruption and influence. Too many cabs chasing too little money leads to bad behavior — and to bad drivers. You can’t get someone to drive a cab for so little money that they can’t pay the rent, and the lower the pay, the lower the quality of the drivers. There are excellent cab drivers in this town who have been doing the job for 20 years or more and know every address, every shortcut, every trick to get you there … but there won’t be many more of them if it becomes a business only for the young and the desperate.

Now: The city ought to have a centralized computerized dispatch system, with GPS on all the cars and an app to get the one that’s clsoes to you (and even more important, give you honest, real-time information about when the ride will arrive). These are technological changes that are coming, and that the city can mandate.

But you can’t just let anyone with a smart phone be a cab driver. That’s not innovation against old-school; that’s just good common sense.