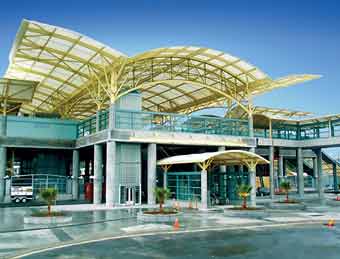 BART Director James Fang is coming under fire for his close relationship with a developer who is trying to build a hotel project on BART property next to its Millbrae station, a project that Fang promoted with a misleading presentation to the Millbrae City Council in September. But Fang says the attacks on him are coming from a powerful rival developer and that he’s only trying to get something moving on the long dormant site.

Underlying the conflict are questions about how BART develops the properties it owns around the Bay Area, questions that have increasingly high stakes around the Millbrae station. Critics say the station was badly designed and hasn’t lived up to hopes that it would promote economic development in the area, but that could change if it becomes a California high-speed rail station and the southernmost direct connection into the BART system.

On one side of the conflict is Fang, a longtime director who also owns Asian Week newspaper, and his friend and political supporter Lawrence Lui, who is proposing to build a hotel and office building at the site through his company, Justin Development Corp. The BART Board of Directors voted 6-2 in closed session in May 2011 to enter into an exclusive negotiating agreement with him.

But city officials in Millbrae have refused to share their hotel tax revenue with BART, a key aspect of making the project pencil out as a long-term revenue source for the district (BART’s policy is to lease property rather than sell in order to bolster annual operating revenues and retain control of properties that increase in value). “It turned out the economics of the project didn’t work, they wanted a kickback, for lack of a better word, in the [Transient Occupancy Tax charged to hotels] for the city of Millbrae,” said Adam Alberti with Singer Associates, which is representing the Republic Urban project.

So the BART board earlier this year voted to re-open negotiations Republic Urban Properties, which Lui had beat out in the previous vote, requesting best and final offers from the two rival developers by Sept. 28. They are still being evaluated. Once a project is selected, that developer and BART would essentially become partners in going through the city’s project approval process.

But Fang left out the competing proposal when he appeared with Lui and BART Property Manager Jeff Ordway before the Millbrae City Council on Sept. 25, trying to build support for Lui’s hotel project. “Mr. Fang stated that he is looking for official direction from the City in joining with BART to build a hotel,” according to official minutes from the meeting.

Two days later, BART General Manager Grace Crunican sent the City Council a letter clarifying the status of the property and the two competing bids. “I regret that this information was not made clear during the City Council meeting and I apologize for any confusion that this omission may have caused,” she wrote.

Since negotiations were reopened, Republic has gone on the offensive to overcome that it says is improper and unfair interference by Fang: hiring high-powered PR firm Singer Associates, attorney Scott Emblidge, and a design team with connections to other BART directors.

“I did not expect the venom that Republic Urban has launched against me,” Fang said. “It might be high-speed rail, maybe that’s why Urban is pulling out all the stops….That would be a large part of it. Maybe Urban thinks this is something they’ve got to do.”

Fang admits his friendship with Lui and to having received $3,500 in campaign contributions from him, but he denies doing anything improper or of having a conflict-of-interest in the case, a position BART lawyers have supported, ruling that Fang doesn’t have a direct interest that would keep him from voting on the project.

“You have a piece of property at BART that has just been sitting there for 10 years, doing nothing,” Fang said. “My bottom line is whatever is the best deal for the district, I’m going to go for…If it turns out Urban Republic has the best deal, I’ll vote for it.”

In a letter to the BART, Emblidge said the Republic Urban project is clearly better: “Republic simply wants to play on a level playing field. It has presented BART with the objectively superior proposal. It asks that all further Board decisions about the Property be made in public and without the participation of Director Fang in order to ensure the competing proposals are truly evaluated on their merits. To do otherwise would be to do a disservice to BART, its riders and the general public and community of Millbrae.”

Alberti cast the decision as one of improper political influence pushing a bad project over a rival project that he called a “true transit-oriented development project.” But Tom Radulovich, a BART director who also heads the urban design nonprofit Livable City, doesn’t quite agree with that assessment.

“None of the projects seem very transit-oriented. They’re all very automobile dependent,” Radulovich said. “We should be more focused on what kind of development we want for the site and find the right developer.”

He called on BART to work more closely with Millbrae and other cities earlier in the process, and to pursue projects that are in the best interests of both entities and are smart planning for the region, particularly given the coming high-speed rail improvements.

As Radulovich said, “We’re talking about a very important hub in the regional transit system, and for that reason it’s important to get it right.”