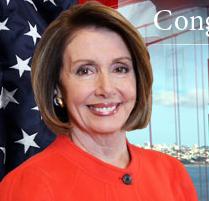 For a while there some of us thought that Rep. Nancy Pelosi, who failed to win back a house majority for the Democrats, might decide her time was up and step down as minority leader (which would probably have meant retiring from Congress). That would have set off one of the hottest political battles in town; just about everyone knows that Pelosi’s daughter is interested in the seat, but there’s no way she was going to get it without a fight. There are lots of ambitious people in this town who would jump at a once-in-a-lifetime chance at a Congressional seat, starting with possibly all of our current state Legislators and a few supervisors.

Would progressives and independents sick of the notion of a Pelosi family dynasty get behind one candidate (say, Mark Leno)? Would Scott Wiener, who Leno has supported and mentored all these years, run anyway, arguing for a younger candidate who could be around for long enough to get seniority? Would Leland Yee, who will be termed out and didn’t get elected mayor, jump in the race? Would Tom Ammiano, who doesn’t seem at all ready to retire?

Lots of crazy speculation — and now it appears we’ll have to wait two more years to go through it again. Because, barring a huge upset in the Democratic Caucus, Pelosi’s sticking around.

I’m not so thrilled about that — and I swear it has nothing (well, almost nothing) to do with the amazing story that a contested race would create for political reporters. It’s just that Pelosi’s been a big disappointment to San Francisco; she cares more about her national constituency that about her district, and her legacy achievement is the privatization of a national park.