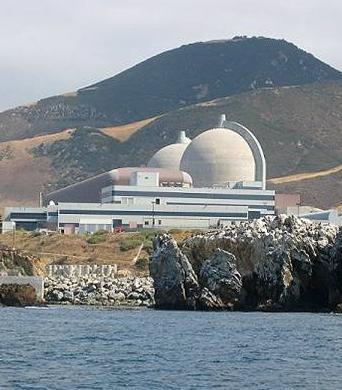 So PG&E wants to frighten, deafen, and kill a whole lot of marine mammals and fish by blasting sound waves at the Ocean floor — to discover exactly what? That there are, indeed, a lot of earthquake faults right near the Diablo Canyon nuke — and that a serious quake risks cracking the containment facility or toppling the whole thing into the sea, contaminaing much of the coast and poisoning a huge population area?

Don’t we already know that?

Don’t we already know that the plant was a terrible idea when it was built and is a worse one now?

It’s well established that a major strike-slip fault (the Hosgri) runs right offshore, and that another one (the Shoreline) is even closer. The whole Morro Bay area is riddled with faults. If one of them goes, it could cause others to go, and that could create a whole lot of shaking, quite possibly more than the aging plant could handle.

Nuclear power plants of Diablo’s vintage were designed to operate for maybe 40 years. PG&E wants to relicense it for another 25. Why not? The company paid about $7 billion to build the thing, and the longer it runs, the more money comes into the corporate coffers.

But one would think that, given what we now know about nuclear plant disasters, that the existence of such a precarious seismic zone so nearby would be ground to shut the thing down, or certainly to let its current license expire without renewal. I’m sure PG&E’s scientific study will show that there’s no danger to the public — that’s what every study the company has done on Diablo has shown — but really? Don’t we know better?