Home Out of the last closet
WriterTim Redmond
SectionPolitics Blog 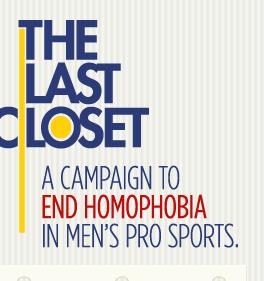 It got pretty well buried in the last-minute election madness, but Sups. David Campos and Christina Olague did a very cool thing Oct. 31 — they helped create some press, and some possible national buzz, for a small San Francisco organization that’s taking on a very big issue.

The Last Closet is trying to get someone — anyone — in the senior hierarchy of male professional sports to talk about homophobia and the fact that there are no out gay men in any of the five major pro sports (football, basketball, baseball, hockey and soccer). When Olague and Campos held a press conference to introduce a resolution endorsing the group’s aims, it got at least passing mention on sfgate. And that’s a start.

Everyone knows there are gay men in the NFL, and in the NBA, and in MLB, and on the ice playing professional hockey. Yet even in 2012, when retired tough-guy athletes can talk about homophobia and the need for equality, not one active player has come out of the closet.

Who cares? Well, if you’re a young LGBT person involved in sports, you care — and you care a lot. Middle-school and high-school locker rooms (male locker rooms, particularly) are still pretty homophobic places and can be scary for gay kids. And there’s nobody for them to see as a role model.

As Campos told me, “What I was with the San Francisco Giants, all the Latino players, was such a source of pride to Latino boys and girls. We can’t feel that in the LGBT community. We know there are gay baseball players, but the LGBT youth don’t have those rold models to look up to.”

Not that sports figures are great role models, but still: One badass NFL player — I envision a linebacker — comes out, and a generation of LGBT youth can say: He’s gay. He’s tougher than any of you assholes who are teasing me.

And it would change lives.

All the Last Closeters want right now is for the commissioners of the five major sports to speak out, to make a statement, to say that out gay players would be welcomed and protected in their leagues and that homophobia would not be tolerated. Doesn’t seem like much to ask.

And yet: Not one will do it.

Maybe Larry Baer can bring it up at the next owner’s meeting.