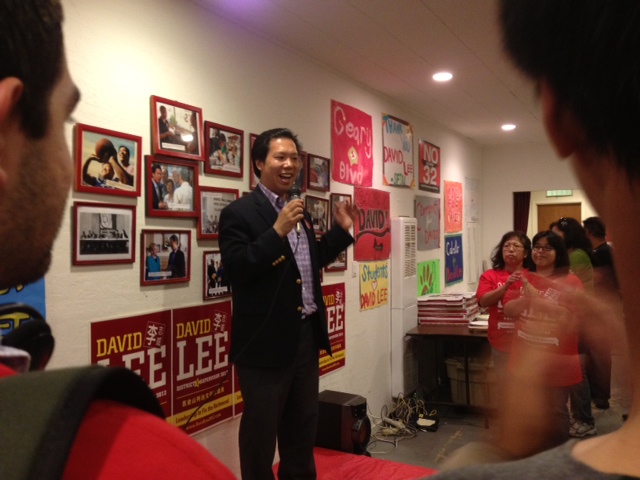 The barrage of mailers put out by the Coalition for Sensible Government, which campaign manager Thomas Lee described as more a source of frustration than anything else, don’t seem to be helping David Lee, who is currently behind incumbent, Eric Mar in his race for District 1 supervisor.

In an address to the group of students and volunteers at the small campaign headquarters Lee stated that, “Regardless of what happens I will be here in the community working to make this district thrive.”

He thanked the volunteers, the police and fire departments for their endorsements, and more donors from the district than in any other campaign, though no mention of who those donors are or what political leaning they may represent.

The emphasis on neglect in Lee’s campaign rhetoric, like bringing business back to the “85 empty storefronts in the district and dealing with potholes that need to be filled,” seemed to be reflected in the opinions of community members present who were upset with Mar’s lack of presence in the district.

Most members of the group were insistent on it’s being a strongly grassroots effort, walking bus routes in the morning and hosting house parties and coffees to meet the community. Though with tens of thousands of dollars from private donors, and a blitz of advertising sponsored by real estate interests, compared to Mar with his small donation based fundraising and aid of Public Financing, this version of Lee’s attempts seemed mildly insincere.