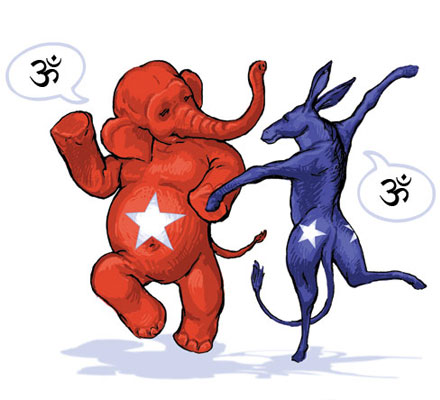 I’ve heard it said that the best test for how enlightened you’ve become is to see how calm you are while spending an entire week living in your parents’ home. I think election time is an even better test. All of the non-judgment and non-violence we’ve been cultivating all year in our yoga practices seems to go out the window once politics jumps in.

Though politics has become a 7000-watt Technicolor light show of power play and ego (and maybe it always was, short of the glowing billboards and the nationally televised verbal gladiator-style showdowns), it is not inherently corrupt or evil. Government, at its best, is an attempt for all of us earthlings to live peaceably together. To create some kind of system that will help us co-exist on this planet from which we sprung sans guidebook (or even, apparently, access to more than 10 percent of our own brains). Politics, stripped to its bare essentials, is a way for us to determine who writes that guidebook.

The goal of creating harmonious rules to live by is not a problem—in fact, it’s kind of a noble pursuit. The problem is that different people have different ideas for what those rules should be, and everyone thinks that their rules are right. And once we introduce “right”, “wrong” is never far behind. Once we have right and wrong, we have … suffering. Yoga speaks directly to this. In fact, the point of yoga, as outlined in Patanjali’s Yoga Sutras, is to create a steady and easeful meditation practice that will liberate us from the suffering that develops from this very play of opposites—right and wrong, pleasure and pain, winning and losing.

It’s not that Mr. P. has anything against politics. I feel pretty sure that if his right to live freely and practice yoga was being threatened by the government of the time, he would have advocated some kind of resistance. But his point is a good one. If we cling too tightly to one of the opposing forces, the other one is sure to take over at some point and make us miserable. For instance, if you just love winning, you’re going to really hate losing. And you can’t experience one without, eventually, experiencing the other. This isn’t just philosophy, it’s physics. As per Sir Isaac Newton: Every action has an equal and opposite reaction.

This is why election time creates so much suffering—because we can’t all win, which means someone has to lose. The loser suffers because, well, losing sucks. The winner suffers because he will lose again at some point—and deep inside, he knows it.

So does that mean we shouldn’t bother with the whole thing? Oh, no. So long as we exist in the material world, opposites will occur, and we have a responsibility to ourselves and our fellow planet-inhabitants to volley for a fair guidebook to the best of our human abilities. But in our fight for our freedoms, we can also stay cool and present.

As you take part in the dramatic duel that is the election, and watch (quite literally) the play of opposites in action, can a small part of you step out, and observe the drama from the outside? When things get tense, can you cultivate a steadiness that keeps you sane and non-reactive?  And when the results come in, can you maintain an awareness that those results (for better or for worse) are not permanent, and that things in the material world are in a constant state of flux? And can you somehow be ok with that? Tall order, sure. But no one ever said that the road to freedom—democratic or spiritual—would be easy.

Get Your Yoga (and Politics) On:

Yoga on Your Own—Develop a Home Practice
The yoga studio is a great place to learn yoga, and also comingle with fellow practitioners, but at a certain point it’s essential to learn how to practice on your own. Join Brenna Geehan for a rich weekend of self-exploration as you learn how to create a personalized home practice.
Sat/3, $35, Yoga Tree Hayes, SF.

5 Yamas, 5 Days: Expand Into the Teachings
What is non-violence? How do you practice truthfulness? In this 50-hour immersion with Janet Stone, learn more about another one of the most referred to sections of Patanjali’s Yoga Sutras—the yamas or “restraints.”
November 9-13, $508, Yoga Tree Mission, SF.

The Body of Mantra
When it comes to chanting Sanskrit mantras, pronunciation is key if you want to tap into the complete power of the mantra. In this workshop with Hawaiian-based yogini Anandra George, you’ll learn all the 50 seed sounds of the Sanskrit alphabet, enabling you to correctly pronounce any mantra you chant.
11/11, 6:30-8:30pm, $25 suggested donation, Shanta Shala, 355 Roosevelt Way, SF. Call 808-440-0691 for more info.

Living Anatomy
This weekend starts a 4-part series with anatomy expert Paul Roache, MD, that will open your eyes to a whole new way of viewing your muscles, bones, and connective tissue. It’s part of a teacher training program at The Loft, but it’s open to any yogi who wants to get intimate with his or her physical form.
11/10-11 (first weekend of series), $60-$220 (depending on how much you attend), The Yoga Loft, San Francisco

Karen Macklin is a yoga teacher and multi-genre writer in San Francisco. She’s been up-dogging her way down the yogic path for over a decade, and is a lifelong lover of the word. To learn more about her teaching schedule and writing life, visit her site at www.karenmacklin.com. Follow On the Om Front on Facebook: www.facebook.com/ontheomfront