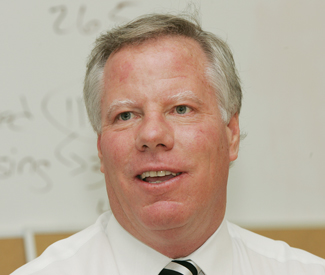 Four women filed National Labor Relations Board complaints and one of them filed a lawsuit alleging gender discrimination against a union run by supervisorial candidate F.X. Crowley, public records show.

Many of their charges were dismissed, but in at five instances, the complaints ended in settlements — and some involved substantial payments to the women.

Four settlement agreements that occurred while Crowley, a candidate in District 7, was the union’s business agent contain confidentiality clauses. But details of a lawsuit settled in 2008 are public — and the records show that the plaintiff, Sandy Reed, accepted $500,000 to settle claims of gender discrimination, harassment, retaliation, and disability discrimination.

Crowley says that the accusations of discrimination are completely untrue. When we asked if gender discrimination went on at Local 16 under his leadership, he replied, “absolutely not.”

“Local 16 has never admitted that there’s been any discrimination at the union hall,” said William Sokol, an attorney for the union. “The union is steadfast that there has been absolutely no discrimination.”

Reed works in craft service, catering film shoots. Since 1989, she worked regularly on sets that were organized by the union and protected by a union contract. She even paid the union 3.5 percent of her earnings in “work fees.”

But some craft-service jobs required union membership, and when she tried to become a union member, Reed alleged in her suit, she ran into problems. She was informed that applicants needed to take a three-year apprenticeship class — and then told that the classes were full, year after year. Meanwhile, male friends and colleagues, doing what she saw as similar work, were brought in as “auxiliary members,” a process by which workers can bypass the apprenticeship program and become members, she claimed in her suit.

In 2001, she filed a complaint with the Equal Employment Opportunity Office, asking what recourse she could take for what she perceived as discrimination based on gender and disability.

The EEOC made a determination in her favor, and in 2003, Reed sued Local 16, its president Richard Putz, and Crowley. Reed settled in 2008, after the case went before labor arbitrator Gerald McKay.

But charges aimed specifically at Crowley and Richard Putz, the union’s president, were dismissed. The two had allegedly facilitated the discrimination.

We asked Sokol about Reed’s case. “I don’t think Sandy Reed’s case was about gender discrimination at all,” he said. “That may be her retrospective point of view on that. That sure wasn’t what the case was about at the time.”

Charlotte Laughon’s story, as she tells it, followed a similar path — she told us she was prevented from joining the union, and retaliated against when she took legal roads in an attempt to rectify the situation.

Laughon and two other women, Victoria Lewis and Laura Chariton, filed a joint National Labor Relations Board charge in 1998.

“We just wanted to be able to join the union,” Laughon told us. “I want to work in my chosen field.”

In the settlement agreement, Local 16 agreed to pay the women damages. The settlement also stipulated that they be permitted to join the union.

But when they joined, Laughon and Lewis say, they didn’t get as much work as they wanted. They described it as being “blackballed.”

The women say that their names weren’t being added to referral lists that the union made available to employers. Laughon says she called every week to ask to be added to the list, as well as asking for copies of the list to check if her name was on them.

Laughon said she could not recall how many EEOC and NLRB charges she filed during that time, but there were many.

Three of those charges were consolidated in July 2005, and the next year, Laughon and the union had reached another settlement agreement. It was ordered that the union furnish Laughon with back pay and send her documents detailing who was on referral lists and other information about several films that had recently been shot in San Francisco.

Crowley said that the union only settled to save money, and that he believes if the cases had gone to court, the union would have won.

Local 16 has also sued Laughon. After the 2000 settlement, the union claimed, she breached the confidentiality agreement.

“Following a resolution between the union and a member of the union, the member breached the terms of the settlement which ultimately resolved in arbitration proceeding and federal court proceeding. The union has a judgment against her in the six figure range,” said Kristina Hillman, an attorney with Weinberg, Roger, and Rosenfeld, the firm that represents Local 16.

Hillman added that “The union is hopeful that she would be gainfully employed,” because she could then pay the money she owes Local 16.

Laughon admitted that she hasn’t paid the judgment. She denies breaching the contract, and told us the case against her had been dismissed.

Crowley said that he is named on these settlements simply because of his role as business manager, and that it has no bearing on his connection to any gender discrimination that may have taken place.

“I wasn’t sued as anything else other than the head of the local. I’m responsible for taking care of those things,” Crowley told us. Dealing with complaints like these is not uncommon, Crowley said, “When you’re the head of an organization.

“I have a track record of advancing woman in my industry,” Crowley told us. “As business manager for the stagehands, I promoted and mentored several woman to our Executive Board including the four woman who currently serve. I am also proud that I identified and recommended to the SF Opera its first female property master.

“I feel that someone’s doing this to make me look bad when all I’ve done is the best I could.”